David Tepper‘s $2.275 billion Panthers purchase price was not the high bid during this process. Albert Breer of SI.com reports Ben Navarro‘s bid came in closer to Jerry Richardson‘s desired $2.6 billion price. But NFL owners had long preferred Tepper, a part-owner of the Steelers, to Navarro. Richardson wanted the team to go to a Carolinian, and Navarro is a Charleston, S.C., native. However, Tepper was able to make his bid mostly in cash, whereas Navarro had to bring in partners some in the league’s power structure found unsatisfactory. The NFL “didn’t trust his money,” Breer writes, paving the way for Tepper. A credit card company mogul, Navarro encountered scrutiny from other owners, to the point he had to hire a PR firm to navigate obstacles during this high-profile pursuit. Additionally, fellow bidder Michael Rubin assembled a group of potential buyers that turned off some owners, Breer reports.

Here’s the latest from the NFC South, which involves the highest-profile player in the NBA’s Pacific Division.

Panthers bidder Ben Navarro has made contact with former NFL quarterback Peyton Manning regarding a limited ownership role if Navarro were to land the Carolina franchise, reports Joseph Person of the Charlotte Observer, who adds Manning is considering the offer.

Manning has long been connected to NFL front office openings, but Person’s report doesn’t mention any possibility that Manning would be involved in personnel decisions. That could certainly change, of course, if Navarro does indeed secure the Panthers, as he’d likely want to remake the club’s front office. General manager Marty Hurney recently had the interim tag removed from his title, but there’s no guarantee he’ll be asked to stick around once new ownership is in place.

Manning, 42, hasn’t made a re-entrance to NFL life since retiring following the 2015 campaign. He was recently linked to a position within the Browns’ front office, but Cleveland owner Jimmy Haslam denied ever making Manning an offer. Earlier this year, both ESPN and FOX heavily pursued Manning as a television analyst, but he rejected overtures from both networks.

The remaining bidders for the Panthers include Steelers minority owner David Tepper, steel magnate Alan Kestenbaum, and entrepreneur Michael Rubin, according to Person.

The Panthers could be close to having a new owner. One of the bidders, Steelers minority owner David Tepper, has dropped out of the race, Ken Belson of the New York Times reports.

A hedge-fund billionaire, Tepper was the buyer whom Belson reports many NFL owners sought as the new Panthers owner. A vote on a new owner is expected to be held at the late-May league meetings in Atlanta. Belson writes that a winning bid could be chosen by the end of this month. Twenty-four owners must vote in favor of the new owner for the sale to be finalized.

Navarro is believed to have submitted a $2.6 billion bid, Belson reports, and it’s unclear if he will cover that price without other investors. A $2.6 billion sale would be an NFL record. A Navarro vote might not be as easy for the owners, with Belson reporting at least three have voiced concerns about him buying the Panthers. Albert Breer of SI.com tweets Navarro vetting’s been ongoing for a few weeks. Tepper had enough capital to buy the team without other investors being involved, which appealed to some NFL owners, and wouldn’t need to be approved since he already is a part-owner of the Steelers.

The Panthers aren’t a threat to relocate in the near future, per Belson, but he adds that there won’t be many restrictions to prevent the buyer from moving the franchise. The Panthers are bound to Bank of America Stadium only through this season.

Labeled as a frontrunner in the bidding to become the new Panthers owner, businessman Ben Navarro will make a visit to the team’s facilities next week, Joseph Person of the Charlotte Observer reports (Twitter link). Person also notes another suitor, Alan Kestenbaum, was in on Wednesday.

A vote on a new owner is expected to take place during late-May meetings in Atlanta, according to David Newton of ESPN.com, who adds a reported sale price of $2.5 billion could potentially be a bit inflated. The last franchise that was sold, the Bills in 2014, went for $1.4 billion.

According to Albert Breer of the MMQB, Navarro is already being vetted by the NFL. The South Carolina businessman is the founder of Sherman Financial, but some owners have had concerns about how Navarro made his money.

The process of selling the Panthers franchise is moving along at an expected rate, and a vote on a new owner is expected to take place during late-May meetings in Atlanta, according to David Newton of ESPN.com, who adds a reported sale price of $2.5 billion could potentially be a bit inflated. 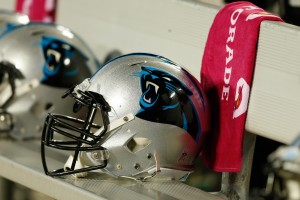 Three other unidentified candidates may have also interest in the Panthers, according to Mike Florio of Pro Football Talk, who speculates North Carolina software mogul Jim Goodnight and British businessman Joe Lewis could be in the running. Cowboys executive Stephen Jones said three “really qualified” suitors are part of the Carolina bidding process, but didn’t reveal those individuals.

The Panthers are the only NFL team up for sale, and the club may have its first serious bidder. South Carolina businessman Ben Navarro is “actively” exploring a potential purchase of the Carolina franchise, according to Jourdan Rodrigue and Katherine Peralta of the Charlotte Observer.

Incumbent owner Jerry Richardson put the Panthers on the market earlier this year following allegations that he not only sexually harassed female employees, but used a racial slur against a team scout. Richardson ceded day-to-day control of the club in December, but he remains under NFL investigation. Carolina, of course, is also without a long-term general manager, as interim GM Marty Hurney is dealing with his own off-field issues.

Navarro, for his part, formerly worked at Citigroup, but now runs a debt collection firm in Charleston, per the Observer scribes. Naarro’s father, Frank, has ties to the football realm, as he served as head coach at four colleges — Williams, Columbia, Walsh, and Princeton — from 1963-84.

While the price to acquire the Panthers is unknown, the last NFL team to be sold — the Bills — went for more than $1 billion. Per NFL rules, Navarro would need to be able to purchase at least 30% of the Panthers up front.