Champ Bailey To Retire As Bronco

NOVEMBER 14: Bailey will sign a one-day contract with Denver and retire as a Bronco on Tuesday, according to the team’s VP of public relations Patrick Smyth, who tweets that there will be an afternoon press conference to make the announcement.

OCTOBER 28: Despite receiving interest from NFL teams, veteran cornerback Champ Bailey has decided to end his playing career, according to agent Jack Reale (Twitter link via ESPN.com’s Adam Schefter). Bailey, who last spent time with the Saints, “has some outstanding opportunities that he’s going to pursue” now that he’s retiring from the NFL, says Reale (Twitter link via Aaron Wilson of the Baltimore Sun). 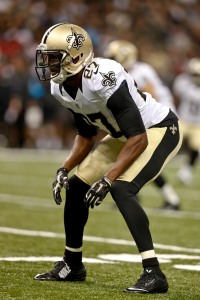 Bailey, who turned 36 this summer, appeared in just five regular season games in 2013 due to a foot injury, and his exorbitant cap hit made him a cap casualty for the AFC champion Broncos. In his last healthy season (2012), Bailey grabbed a pair of interceptions and racked up 66 tackles. His combination of positive grades against the run and in pass coverage resulted in a top-10 rank at cornerback in ’12, according to Pro Football Focus’ advanced metrics (subscription required).

However, even after signing a deal with the Saints that included $500K in guaranteed money, Bailey was unable to secure a spot on the team’s 53-man roster. The 12-time Pro Bowler had indicated he’d be willing to play safety in addition to or instead of cornerback, but that may not have been a smooth transition at age 36, and he’s not a special-teams contributor, so New Orleans opted for more versatile options instead.

While he didn’t start the season on a roster, Bailey had been receiving interest in recent weeks. Per Schefter (via Twitter), Reale indicated that at least two playoff contenders were eyeing his client, and one of those was likely the Ravens, whose interest we heard about a couple weeks ago. Perhaps the other club was the Lions, who worked out Bailey back in September.

Assuming Bailey doesn’t come out of retirement at any point and has indeed played his last NFL snap, it should just be a matter of time until he’s inducted into the Hall of Fame. In addition to his 12 Pro Bowl berths, Bailey racked up 52 interceptions during a 15-year career that saw him spend five seasons in Washington and 10 in Denver. His most impressive stretch came with the Broncos in 2005 and 2006, when he grabbed 18 total INTs in two seasons, returning three of them for touchdowns.

Bailey will be eligible for Hall of Fame induction in 2019.

Defensive back Champ Bailey worked out for the Ravens last week, and while Baltimore chose not to sign Bailey at that point, the team hasn’t ruled out the possibility of bringing aboard the veteran free agent. A league source tells Mike Preston of the Baltimore Sun that the Ravens still have interest in Bailey, and have maintained contact with him since last week’s meeting.

Jimmy Smith has played very well at right cornerback this year for the Ravens, and Lardarius Webb has held his own on the other side since returning to regular action in Week 5. However, with Asa Jackson having been placed on injured reserve with the designation to return, Baltimore doesn’t necessarily have regular, reliable third and fourth corners at the moment. As Preston writes, a veteran presence in a secondary that “lacks communication” at times could be useful, even if Bailey isn’t the same sort of difference-maker he once was.

Bailey, 36, had been expected to contribute in New Orleans after signing with the Saints in the offseason, but he was a surprise roster casualty in the preseason, with the team eating some guaranteed money to let him go. Since then, Bailey has worked out for the Lions and Ravens, and has been linked to a handful of other teams in need of secondary help, though most of those connections have been merely speculation.

According to Preston, the Ravens continue to keep an eye on several free agent defensive backs that could help the team at some point this season, but Bailey is “high on the list.”

Dodger Stadium is in play as a potential temporary venue for an NFL team moving to Los Angeles, according to Sam Farmer of the Los Angeles Times (on Twitter). Hopefully, whatever team moves there will fare better than the Dodgers did tonight. Tonight’s look around the league..

Every time Andrew Luck turns around and hands the ball off to a running back, Colts’ fans take to the internet to demand that offensive coordinator Pep Hamilton’s job. Trent Richardson‘s struggles and the team’s 0-2 start to the season only added to the anti-Hamilton bandwagon. Mike Freeman of ESPN thinks that after the Colts put a huge number on the board against the lowly Jaguars, Hamilton’s job is safe. The team is ranked in the top three in the league in total yards, passing yards, and points per game. Here are some other notes from the Colts:

As the Lions and Jets prepare to battle this Sunday, a huge factor in the matchup could come to a decision made much earlier this offseason. Both teams entered the offseason with a very similar needs, namely cornerback and wide receiver. While each team elected to more or less ignore their cornerback problem, both made big splashes at receiver. Eric Decker was thought to be the top pass catcher on the market, but it was the Lions who struck a deal first, electing to sign Golden Tate away from the Seahawks. Head coach Jim Caldwell notes that Tate was their first choice from the beginning, reports Dave Birkett of the Detroit Free Press.

“I can tell you that Golden was our prime target and we’re glad he’s here,” said Caldwell. “Decker obviously is a fine football player and does a lot of things extremely well.”

Decker is questionable for Sunday, but expects to play. reports Brian Costello of the New York Post.

Here are some other notes as we draw closer to Lions vs. Jets at MetLife Stadium Sunday:

Rob Bironas was planning to continue his NFL career before his unexpected death earlier this week, according to Titans punter Brett Kern. “I talked to him on Friday, because he had the workout with the Lions, and he was so excited that it went well. I told him I was proud of him,’ and that’s the last thing I told him,” Kern told reporters, including Jim Wyatt of The Tennesseean. “He was really looking forward to signing with another team.” More from around the NFL..

For a surefire future Hall of Famer, Champ Bailey has had a tumultuous offseason. After being released by the Broncos in March, Bailey signed a two-year deal with the Saints, only to be cut again, this time in late August. The 36-year-old cornerback worked out for the Lions on September 4 but wasn’t immediately signed; he’s garnered no other known interest. Bailey doesn’t sound like he’s ready to retire just yet, however, telling SiriusXM NFL Radio (on Twitter) that “if [the Lions] call, that’s a team [he’d] really like to talk to.”

Additionally, Bailey seems amenable to moving to safety, a transition that many aging corners make in order to find work in the NFL. The change has been suggested for Bailey over the past few seasons, and while he’s previously resisted such a move, he says he’d be “open to pretty much anything (position wise) at this point” (link). Since auditioning Bailey, Detroit has worked out a multitude of other cornerbacks, suggesting it wasn’t pleased with Bailey’s workout. It’s just my speculation, but the Jets, who could use help at both corner and safety, could make sense as a landing spot for Bailey.

As evidenced by his lack of employment, Bailey struggled in 2013 — while dealing with injuries, he amassed a -2.5 grade from Pro Football Focus (subscription required). However, nearly all of that negative value was due to lackluster performance in the Super Bowl. As recently as 2012, Bailey was his usual self, rating as the 10th-best CB among 113 qualifiers, per PFF. For his career, Bailey has started 212 games, racking up 52 interceptions and 812 tackles.

Champ Bailey Worked Out For Lions

12:01am: Bailey’s workout went well and the Lions liked what they saw, but it doesn’t seem that any signing is imminent, tweets Ian Rapoport of NFL.com.

11:26am: The Lions appear to be on the lookout for veteran help in their secondary, and will bring in cornerback Champ Bailey for a workout today, according to Tim Twentyman of DetroitLions.com (via Twitter). Bailey was let go over the weekend by the Saints as New Orleans cut its roster down to 53 players.

Bailey’s visit to the Lions comes on the heels of the team trying out several other free agent defensive backs. Roc Carmichael, Tommie Campbell, Chris Clemons, and Anthony Walters are among the players to audition for Detroit so far this week. The secondary, which lost 2013 starters Chris Houston and Louis Delmas this offseason, appears to be the weakest part of the Lions’ roster, or at least the group with the most question marks.

Bailey has a few question marks himself, after failing to earn a roster spot with the Saints despite receiving a $500K signing bonus when he signed with the club in April. The 12-time Pro Bowler appeared in just five regular season games in 2013 due to a foot injury, and his exorbitant cap hit made him a cap casualty for the AFC champion Broncos. He’s said to be healthy, but it remains to be seen how much he has left in the tank at age 36.

Jets’ general manager John Idzik is putting his stamp on the team, as 32 players on the final 53-man roster were Idzik acquisitions, writes Brian Costello of the New York Post (via Twitter). That leaves only 21 players left from former general manager Mike Tannenbaum’s time with the team,

Here are some other notes surrounding Gang Green after final cuts: