The Ravens auditioned free agent quarterback Ryan Nassib on Wednesday, according to Field Yates of ESPN.com (Twitter link). Nassib, a former fourth-round pick, spent four years as Eli Manning‘s backup in New York, but attempted only 10 total passes during that time. After hitting free agency last spring, Nassib initially signed with the Saints, but was quickly released. Another one-year deal, this time with the Jaguars, ended in the same fashion, and Nassib spent the majority of the 2017 campaign unsigned. Baltimore, meanwhile, only has two quarterbacks under contract for 2018: starter Joe Flacco, and former undrafted free agent Josh Woodrum, who signed a futures deal earlier this month.

At the outset of the Bills’ head coaching search earlier this month, general manager Doug Whaley was open to relinquishing control over the team’s 53-man roster to Rex Ryan‘s successor. It turns out Whaley will continue to oversee the roster in 2017, Year 1 of the Sean McDermott era, the rookie head coach announced at his introductory press conference Friday. “Doug has control of the 53,” said McDermott, who added he’s “very comfortable with the situation” (via Mike Rodak of ESPN.com).

FRIDAY, 5:16pm: The Chargers have officially confirmed Whisenhunt’s return, and announced four other changes to Mike McCoy‘s coaching staff. They are as follows:

WEDNESDAY, 2:27pm: The Chargers may not know yet where they’ll be playing in 2016, but they now know who will be running the team’s offense. According to Michael Gehlken of the San Diego Union-Tribune, former offensive coordinator Ken Whisenhunt is returning to the Chargers to assume the same role, replacing Frank Reich. 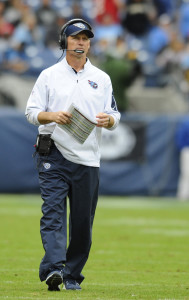 Whisenhunt previously served as San Diego’s offensive coordinator during the 2013 season, Mike McCoy’s first as the team’s head coach. The Chargers finished that year with a modest 9-7 record, but won a playoff game, and featured an extremely productive offense. After ranking 24th in the NFL in offensive DVOA in 2012, the Chargers placed second under Whisenhunt in 2013, per Football Outsiders.

In 2014, Reich’s first year as offensive coordinator, San Diego fell from second in offensive DVOA to 11th. The team slipped to 15th in 2015, and also went from scoring nearly 25 points per game in 2013 to just 20 this season, despite the fact that Philip Rivers led the NFL in passing completions (437) and attempts (661). Reich was let go by the Chargers a day after the regular season ended.

Whisenhunt, meanwhile, spent most of the last two years in Tennessee as head coach of the Titans. However, after finishing 2-14 in his first year with the club, he led the team to a 1-6 mark this season before receiving his walking papers.

With the Chargers in need of a new offensive coordinator and Whisenhunt looking for a new job, a reunion made too much sense for the two sides to pass up the opportunity.

Mike Holmgren has reportedly expressed interest in the 49ers‘ head coaching job for the second consecutive year, and ESPN’s Bill Williamson (Twitter link) hears that the veteran NFL coach would still be open to talking to teams — especially the Niners. However, San Francisco has not yet contacted Holmgren about the team’s head coaching job, tweets Eric Branch of the San Francisco Chronicle.