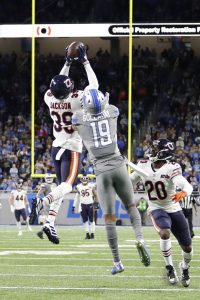 The Bears have locked down star safety Eddie Jackson for years to come. On Friday, his agents announced the signing of a four-year add-on worth $58.4MM.

The new deal includes $33MM in overall guarantees and $22MM fully guaranteed. The $14.6MM average annual value of the deal ranks as the highest of any safety in the NFL.

Jackson, 27, still had one year to go on his paltry four-year, $3.065MM rookie deal. But, after back-to-back Pro Bowl nods, the Bears didn’t want to wait until the asking price jumped even further.

The Bears were somewhat limited on cap space for 2020, but thanks to some help from Kyle Fuller, they were able to carve out enough room to extend Jackson through the 2024 campaign.

Jackson entered the league as a fourth-round pick of the Bears in 2017. Since then, he’s started in 100% of his games and solidified himself as one of the league’s premier safeties. Over the last three seasons, he’s notched ten interceptions and returned three of those picks for touchdowns.

The advanced metrics back up the traditional stats, too. In 2018, Jackson earned an eye-popping 93.2 score from Pro Football Focus, tying him for the highest grade ever given to a safety. He wasn’t quite as sharp in 2019, but the Bears believe that he’ll bounce back in 2020, along with the rest of the team’s high-priced defense.

Before Jackson’s deal, Titans safety Kevin Byard had the highest AAV at the position ($14.1MM) thanks to the five-year, $70.5MM extension he signed last summer. In terms of overall compensation, Redskins standout Landon Collins still reins supreme at safety with his six-year, $84MM deal.

Bears Acquire No. 112 From Rams

The Bears have acquired pick No. 112 from the Rams, tweets Rich Campbell of the Chicago Tribune. Chicago will select Alabama safety Eddie Jackson.

Chicago sent pick Nos. 117 and 197 (sixth round) in order to move up. Jackson will add another presence in a rebuilt Bears secondary.