Throughout the offseason, Hue Jackson has insisted there is no quarterback competition in Cleveland. Even before the Browns’ No. 1 overall pick became known, the third-year head coach said Tyrod Taylor will be his starter. And Jackson wants that to be the case for the duration of this season. As for why the Browns were steadfast with Taylor as their starter despite the team going 0-16 last season: the franchise wants to make this year about winning games rather than developing a rookie quarterback at any cost, Mary Kay Cabot of the Cleveland Plain Dealer writes. Mayfield’s progressing quickly, in Cabot’s view, and showing the kind of arm talent that had Browns execs and then-consultant Scot McCloughan convinced going into the draft he could turn the franchise around. Another argument could be made that the Browns’ status as a non-contender, talent added this offseason notwithstanding, should prompt them to get Mayfield some reps early this season. Cabot does believe the 2017 Heisman Trophy winner will play this year, but for now, it doesn’t look like the Oklahoma product will be fast-tracked into the lineup like 2017 first-rounders Mitch Trubisky or Deshaun Watson were with their respective teams.

Here’s the latest from northeast Ohio:

The Browns have agreed to sign wide receiver Jeff Janis, Peter Schrager of NFL.com tweets. Janis spent the past four seasons with the Packers. 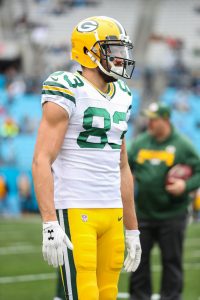 At one point in time, there was some buzz about the former seventh-round pick becoming a popular target in Green Bay’s offense. At the 2014 combine, Janis impressed with a 4.42 second 40-yard-dash, a 37.5 inch vertical leap, 20 bench press reps, and a 6.64 second time in the three-cone drill. He became a special teams fixture, but never got much of a chance on offense. His highest level of involvement came in 2016 when he was targeted 19 times and came away with eleven catches for 93 yards and one touchdown.

Janis’ deal is a low-risk proposition for the Browns. At worst, he’s a potential special teams contributor on a cheap contract that can be easily terminated if he doesn’t make the final cut. The Browns could also give him an opportunity to work in the slot, instead of on the outside. Given Janis’ tools, that could be the best way to utilize him.

The Browns now boast one of the league’s best slot weapons in Jarvis Landry and he’ll pair with Josh Gordon at the top of the wide receiver depth chart. Janis will fight for a role in a group that also includes former first-round pick Corey Coleman, Ricardo Louis, Rashard Higgins, and Kasen Williams.

Packers WR Jeff Janis broke his right hand on Wednesday, and although a serious injury is a less-than-ideal way to solve a roster crunch, Janis’ misfortune could help resolve Green Bay’s logjam at wide receiver, as Tom Silverstein of The Milwaukee Journal Sentinel writes. Head coach Mike McCarthy all but ruled out having seven wide receivers on his 53-man roster early in camp, and if the Packers were to put Janis on IR, they could keep all six of their other drafted receivers: Jordy Nelson, Randall Cobb, Davante Adams, Ty Montgomery, Jared Abbrederis, and Trevor Davis. Of course, Green Bay could put Janis on the Injured Reserve-Designated to Return list, which means that the club could keep those other six wideouts, and if Janis is needed later on, he could be brought back for the second half of the season. Today, McCarthy said that Janis, at the very least, will not practice with the team this week (Twitter link via Silverstein).

In his end-of-season press conference, Mike McCarthy gave Eddie Lacy an ultimatum of sorts after the third-year running back endured his worst season.

“Eddie Lacy, he’s got a lot of work to do. His offseason last year was not good enough, and he never recovered from it,” McCarthy told media, including ESPN.com’s Jason Wilde. “He cannot play at the weight he was at this year.”

Lacy’s yardage total decreased considerably from two upper-echelon campaigns in 2013-14, with the former second-round pick rushing for 758 yards (4.1 per carry) on 187 totes — 59 fewer than last season and 97 fewer than his offensive rookie of the year slate.

2015 also brought three games where Lacy came off the bench, once as a result of missing curfew in Detroit and being outright demoted in favor of James Starks earlier.

Here are some more takeaways from the Packers coach’s presser.

As expected, the agent for Browns left tackle Joe Thomas, Peter Schaffer, has quickly moved to dispute this morning’s reports that the trade that would have sent Thomas to the Broncos fell through because Denver would not guarantee Thomas’ 2016 and 2017 salaries. Those reports, of course, also mentioned that Thomas asked Cleveland to see if it would be able to trade him. In a series of tweets, Mary Kay Cabot of Cleveland.com passes along Schaffer’s response.

Schaffer says Denver and Cleveland never discussed Thomas’ contract, adding that if the Broncos were willing to give up a first-round pick for Thomas, they had no intention of cutting him, so there would have been no need to discuss guaranteed salaries. Furthermore, Schaffer says neither he nor Thomas asked the Browns to pursue a trade, and he is frustrated that this morning’s news made Thomas–who expressed surprise that he was almost traded, and said he would have been crushed should the deal have happened–look like a liar. Former NFL agent Joel Corry weighed in as well (via Twitter), noting that even if Thomas did ask for his 2016 and 2017 salaries to be guaranteed, that should not have killed the trade unless Schaffer convinced Denver that a holdout was coming next year.

Now let’s take a look at some more notes from the league’s north divisions:

It’s Saturday morning, and that means ESPN.com’s NFL writers are opening their mailbags and answering questions from readers. Let’s start with notes from the NFC, with a cameo from the Dallas Morning News’ Bob Sturm…

Lyerla, in Green Bay at rookie orientation camp on a tryout basis after going undrafted, can be argued as the most talented rookie at his position. He stands 6-foot-3 and 242 pounds, and he ran 4.61 seconds in the 40-yard dash at the NFL combine. But, Lyerla left the Ducks program his junior season and was subsequently arrested for cocaine possession and feeling from the police.

“We did a lot of work on Colt,” general manager Ted Thompson said. “He’s a very talented athlete. We interviewed him at the combine. We went through all those procedures, talked to a lot of people. He’s a young man that made some mistakes, and we feel like he was worth bringing in and taking a look at.”

Without Jermichael Finley in the fold, the tight end position in Green Bay is relatively thin. Fifth-year pro Andrew Quarless was re-signed this offseason and figures to be the team’s opening-day starter, and the team used a third-round pick at the position on Cal product Richard Rogers.

More news and notes from Titletown…

Here’s a rundown of tonight’s draft signings from rounds 3-7. For a look at the signings that went down earlier today, check out our previous post..