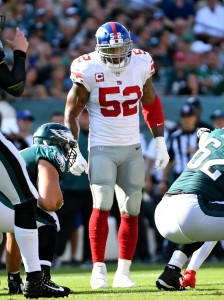 Casillas, who is dealing with injuries to both his neck and his wrist, didn’t play against the Raiders on Sunday, and has missed four games total this season. When he was on the field, the 30-year-old Casillas wasn’t effective: Pro Football Focus ranked Casillas as the single worst run-defending linebacker in the NFL, and while his pass defense mark was a bit better, Casillas still placed as a bottom-10 ‘backer overall. He’ll hit the open market next spring when his three-year contract expires.

Powe, who went undrafted out of Cal in 2016, has never appeared in an NFL game, as he’s spent the entirety of his pro career on the Giants’ practice squad. On a roster now devoid of weapons, Powe could certainly see playing time down the stretch behind Sterling Shepard, Roger Lewis, Tavarres King, and Travis Rudolph.

The Giants haven’t had any recent talks regarding extensions for key players such as wide receiver Odell Beckham Jr., guard Justin Pugh, center Weston Richburg, or linebackers Jonathan Casillas and Devon Kennard, according to Jordan Raanan of ESPN.com. 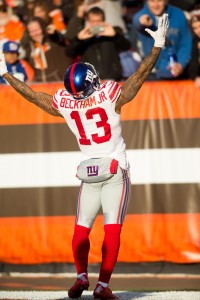 New York reportedly isn’t prioritizing a new deal for Beckham, and that’s likely because the star wideout is under team control for at least more seasons. Thanks to the fifth-year option, the Giants have Beckham signed through 2018 at a cost south of $11MM. In 2019, Big Blue could opt to utilize the franchise tag to retain Beckham for one more year, although that tender would come with a price tag exceeding $18MM. Beckham recently indicated his desire to become the NFL’s highest-paid player, but that’s not a realistic goal in today’s quarterback-driven league.

Pugh and Richburg, however, are entering the final years of their respective rookie contracts, which makes their situations all the more pressing. The franchise tag isn’t a practical option, as the offensive line tender’s price is enhanced by tackles, meaning it’s unsuitable for interior lineman. As James Kratch of NJ.com reported last month, the Giants aren’t expected to reach an extension with Pugh, who seems intent on hitting the open market. A new pact for Pugh would need to include at least $25MM in guarantees for Pugh to take the offer “seriously,” per Raanan.

At linebacker, Kennard isn’t a full-time player, as he saw action on roughly 40% of the Giants’ snaps. As a ‘backer who comes off the field on third downs, Kennard isn’t on track for a hefty pact. Casillas is an every-down player, but he’s entering his age-30 campaign and didn’t earn positive grades from Pro Football Focus a year ago. Still, he’s a stabilizing force on New York’s defense, and Rannan suggests there are reasons for Big Blue to “extend its relationship” with Casillas.

Had the Giants let Jason Pierre-Paul hit free agency instead of franchise-tagging him for the second time, the Cowboys were prepared to intervene. Dallas was going to attempt to pry JPP away from the Giants if he were available, Ralph Vacchiano of SNY.tv reports. While fitting Pierre-Paul’s high-end salary demands would have been difficult for a Cowboys team that as of now has the least cap room in the league at $3.3MM, Jerry Jones wants to upgrade his team’s pass-rushing corps.

A source informed Clarence Hill of the Fort Worth Star-Telegram the Cowboys are seeking help at pass-rusher and wide receiver this offseason. An interest at wideout seems interesting given that the Cowboys stand to return their top three pass-catchers from 2016, with only Terrance Williams being a free agent, and the team having shifted to a run-based offense. Dallas plans to try and retain Williams, but only at a certain price, per Hill. If the sides can’t work something out, the Cowboys will target a receiver in free agency or the draft.

“We can’t come up empty. We have somebody meaningful there. They are part of our core strategy. But it’s two [positions]. It’s not nine,” Jones said, without identifying those positions. “And I think we have the cap room and whatever we resolve with Tony [Romo], I feel confident we will not lose on those two.”

Casillas, a 27-year-old journeyman, had spent time with Saints and Buccaneers before being traded to the Patriots last year. In New England, he started three games, but was mostly a special teams contributor. In New York, he’ll join Jon Beason, who recently restructured his contract, at linebacker.

Updates On Players Traded At Deadline

The trade deadline passed a little over a month ago, and while the NFL never sees the level of activity that do other sports, there were several notable players dealt. With 33 days worth of observation, we can begin to assess how certain trades have worked out for the acquiring teams, and if the players involved will remain on their new clubs’ rosters for the long term. Using our list of 2014 NFL trades, here’s a look at the four deals that occurred within a month of the October 28 deadline:

3:59pm: The Bucs are getting a 2015 fifth-round pick in the deal in exchange for Casillas and a 2015 sixth-rounder, reports Greg Auman of the Tampa Bay Times (via Twitter). Meanwhile, the Pats have waived offensive lineman Chris Barker to make room on the roster for Casillas, says Field Yates of ESPN Boston (via Twitter).

3:02pm: After acquiring one linebacker (Akeem Ayers) from the Titans last week, the Patriots are finalizing a deal for another, according to Ian Rapoport of NFL.com, who reports (via Twitter) that the Buccaneers are sending Jonathan Casillas to New England. The move is being completed in advanced of today’s 3:00pm CT trade deadline.

Casillas, 27, began his NFL career with the Saints in 2009 after going undrafted out of Wisconsin. He joined the Bucs in 2013 and has played for the team since then, starting seven of his 17 games with the club. In parts of five seasons, Casillas has accumulated 127 tackles in 55 contests, defending five passes and recovering a pair of fumbles. While he has played 109 defensive snaps so far this season, the Wisconsin product’s playing time has been on the decline since 2011.

Several Buccaneers had been cited as potential trade candidates, but according to Mike Florio of Pro Football Talk (via Twitter), running back Doug Martin isn’t going anywhere, and it sounds as if Vincent Jackson will stay put as well.

The Buccaneers have agreed to terms on a new one-year contract with linebacker Jonathan Casillas, according to Scott Smith of Buccaneers.com (Twitter link). Casillas had been eligible for unrestricted free agency next week.

Casillas, 26, joined the Bucs last season after spending the first three seasons of his NFL career in New Orleans. The Wisconsin alum appeared in the team’s first 12 games, playing a total of 199 defensive snaps, before heading to injured reserve with a knee issue. Casillas was also a contributor on special teams, racking up 11 tackles on return plays.