The Jaguars will make Kamalei Correa‘s stay brief. A few months after trading for the veteran linebacker, the Jags will release him, Tom Pelissero of NFL.com tweets.

This is not surprising. Correa’s season ended when the Jags placed him on the reserve/left squad list in December. Jacksonville acquired the former second-round pick from Tennessee in October.

Correa, 26, played in six games with the Jaguars and started all six. While Correa saw an uptick in his playing time compared to how the Titans were utilizing him, he still worked as a part-time linebacker with the Jags. He finished his season with seven tackles in six Jaguar games.

The Titans were planning to release Correa last year, but the Jaguars offered them late-round draft compensation. The Ravens traded the 2016 draftee to the Titans in 2018. With Urban Meyer now in charge, there figure to be quite a few changes to Jacksonville’s roster in the coming weeks.

The Titans have found a taker for Kamalei Correa. After the linebacker requested a trade, the Titans agreed on a deal that will send him to the Jaguars, Mike Garafolo and Tom Pelissero of NFL.com report (via Twitter).

As expected, the compensation is minimal. In a pick-swap agreement, the Jags will send the Titans their 2021 sixth-round pick and receive a 2021 seventh-rounder from Tennessee.

Correa has played just 39 defensive snaps this season and, after coming off Tennessee’s reserve/COVID-19 list Tuesday, did not play against the Bills. As a result, a rare intra-division trade will commence. The Titans were set to release Correa had they not found a trade partner.

This marks the second trade of Correa’s five-year career. The Ravens dealt the outside linebacker to the Titans just before the 2018 season. The former second-round pick played 32 games with the Titans, making nine starts and tallying 8.5 sacks.

Correa will follow Jabaal Sheard to Jacksonville. The Jaguars gutted their “Sacksonville” defensive line this offseason, cutting Marcell Dareus and trading Calais Campbell and Yannick Ngakoue. Like Sheard, Correa is in line to work as a depth piece behind first-round picks Josh Allen and K’Lavon Chaisson.

Titans linebacker Kamalei Correa demanded a trade after being inactive on Tuesday night, according to Mike Garafolo and TomPelissero of NFL.com (on Twitter). The Titans will oblige — they try to trade Correa, and they’ll release him if they can’t find a taker.

Correa has seen just 39 defensive snaps and 24 special teams plays this season. After spending time on the Reserve/COVID-19 list, he was eager to get back on the field this week. In 2019, the Boise State product saw the most action of his career, appearing in all 16 games and starting five of them. He played in about 40% of the Titans’ defensive snaps and served as a major special teams contributor. Although Pro Football Focus’ advanced metrics considered him an average pass rusher, he did pick up a career-high five sacks.

Lauded for his coverage abilities, the former Ravens second-round pick was a favorite of former Titans defensive coordinator Dean Pees. When Pees retired this year, Correa lost one of his biggest supporters. Still, Correa agreed to a new one-year, $3.5MM deal with the Titans in April, hoping that he’d still be a defensive regular.

The NFL has postponed Sunday’s game between the Steelers and Titans, according to Dianna Russini of ESPN.com (on Twitter). From here, the league will weigh its options, including rescheduling the game for Monday night. Tuesday night is also on the table, per Ian Rapoport of NFL.com (Twitter link), but Paul Kuharsky of PaulKuharsky.com reports that the CBS crew covering the game has been told that it will happen on Monday (h/t Mike Florio of Pro Football Talk).

The Titans put everything on pause this week after three players and five personnel members tested positive for COVID-19. The Titans have since placed linebacker Kamalei Correa, defensive lineman DaQuan Jones, long snapper Beau Brinkley, and practice squad tight end Tommy Hudson on the reserve/COVID-19 list (we already knew about the latter three players, but Correa is a newer addition to the list). The Vikings, who faced the Titans in Week 3, have also suspended their activities. They’re currently scheduled to face the Texans in Houston and, so far, they have not received any positive tests.

Thankfully, no one on the Titans’ side appears to be critically ill. “Some of them are indeed experiencing flu-like symptoms, (but) nothing out of the ordinary. We anticipate they will feel better shortly,” head coach Mike Vrabel told reporters (Twitter link via Aditi Kinkhabwala of NFL.com).

The Titans advanced to 3-0 after their 31-30 win over the Vikings on Sunday. The Vikings, meanwhile, are winless through three games with a thoroughly depleted defense.

The Titans are bringing back linebacker Kamalei Correa, as Correa’s agency, DEC Management, announced via Twitter. Tom Pelissero of the NFL Network says it will be a one-year deal worth up to $3.5MM (Twitter link).

The Ravens selected Correa in the second round of the 2016 draft with the hopes that he could become a fearsome edge rusher. Although he showed some flashes of that ability here and there, he was never able to put it together in Baltimore, and he was traded to the Titans before the 2018 season in exchange for a sixth-round pick.

In Tennessee, Correa continued to work with Dean Pees, who had served as the Ravens’ defensive coordinator for the prior six seasons and who agreed to join the Titans’ staff in the same capacity in 2018. Pees announced his retirement in January, so Correa has lost one obvious supporter, but the team clearly saw enough from him to re-sign him.

The Boise State product saw the most action of his career in 2019, appearing in all 16 games and starting five of them. He played in about 40% of the Titans’ defensive snaps and continued to be a major special teams contributor. Although Pro Football Focus’ advanced metrics considered him an average pass rusher, he did pick up a career-high five sacks. He has also been lauded for his coverage abilities.

Per Terry McCormick of TitanInsider.com, Correa has had an offer from the Titans for a couple of weeks (Twitter link). Clearly, he did not get a more attractive proposal on the open market.

The family of late Broncos owner Pat Bowlen will receive Bowlen’s Gold Jacket and Hall of Fame ring, as Mike Klis of 9News.com writes. Bowlen was elected to the Hall of Fame in February but passed away in June, making him the first HOFer to die between his election and his induction. Typically, the HOF doesn’t present the jacket and the ring to those enshrined posthumously because it doesn’t want the family to fight over the artifacts or sell them, but the production of the artifacts had already begun before Bowlen passed.

The family will display the items in the front lobby of the Broncos’ UCHealth Center headquarters so that they can be enjoyed by fans.

The Ravens have left traded linebacker Kamalei Correa to the Titans, accoridng to Jeff Zrebiec of The Athletic (on Twitter). The Ravens will receive a 2019 sixth-round pick in return. 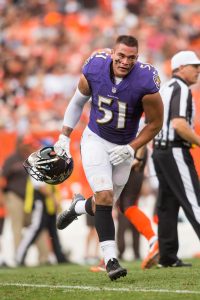 Correa was a second round pick of the Ravens in the 2016 draft. Although the Ravens had high hopes for him at the time, Correa hasn’t done much at the NFL level. In 25 games over the last two years, Correa has totaled just eleven tackles.

This summer, Correa was given an opportunity to play at his preferred outside linebacker position as well as inside linebacker. Although he flashed at times, the Ravens still had Terrell Suggs, Matthew Judon, Za’Darius Smith, Tim Williams, Tyus Bowser ahead of him on the LB depth chart.

Titans defensive coordinator Dean Pees is obviously a fan of Correa, so he should be in for an uptick in playing time now that the two are reunited. In Tennessee, Correa will have an opportunity to back up Brian Orakpo and Derrick Morgan and he may get even more chances to play if Harold Landry misses time with his ankle injury.

With Le’Veon Bell demanding $17MM per year, less than three weeks could remain for Steelers fans to view the All-Pro running back as a long-term asset. Following the July 16 franchise tag deadline, Bell could be headed toward rental status this season and 2019 free agency. The Steelers are not about to authorize a $17MM-AAV deal for Bell, Paul Zeise of the Pittsburgh Post-Gazette writes, adding that the only chance of an extension being hammered out is if Bell comes off that price. Judging by the lack of communication between the parties since their pre-draft re-up talks, Zeise notes it’s clear the Steelers are going to hold their line. Bell is optimistic about a deal, but Zeise notes he appears to be the only one. The Steelers may not be able to replace Bell, but the gap between he and either James Conner (or a future successor) may not translate to Pittsburgh paying its running back what he wants. Bell’s $17MM-per-year price is more than twice what current running back salary leader Devonta Freeman makes.

Here’s the latest from Pittsburgh and other AFC North cities.