The Browns’ kicking job appears to belong to Zane Gonzalez. On Tuesday, the Browns waived kicker Ross Martin, along with five others.

Gonzalez nailed a 54-yard field goal in Thursday night’s preseason win over the Eagles, and that may have given him the leg up. Despite some misses in Sunday’s practice, Gonzalez edged out Martin.

“Obviously, Gonzo kicked a 54-yarder” coach Hue Jackson said this week (via Nate Ulrich of the Beacon Journal). “That was huge. Today, he missed a couple. We will go back and watch the tape. I still think that he is in the lead.”

A look at the AFC and NFC South:

The Texans auditioned long snapper Jon Condo and offensive lineman Kevin Bowen on Tuesday, as Aaron Wilson of the Houston Chronicle writes in a pair of articles. 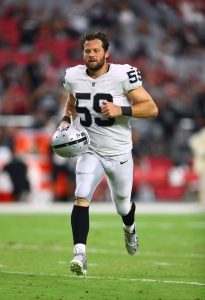 Houston already employs Jon Weeks — who made the Pro Bowl as recently as 2015 — so it’s unclear if the club is seeking to replace Weeks, or simply taking a look at Condo for possible depth down the line. Weeks, who has been with the Texans since 2010, signed a four-year, $3.9MM extension in 2015 that will keep him under contract through 2019. Houston could conceivably release Weeks, as it would only incur a $100K dead money charge for doing so.

Condo, for his part, reached free agency in March after spending 11 seasons with the Raiders. Oakland opted to sign Andrew DePaola to replace Condo, who ranked just 28th among 33 qualified long snappers in accuracy, per Austin Gayle of Pro Football Focus (Twitter link). Condo has earned two Pro Bowl nods during his career, although the most recent came back in 2011.

Bowen, meanwhile, was an undrafted free agent out of Division II East Central in 2016. While Bowen was with the Redskins from 2016-17, he never actually saw the field, as health issues forced to him injured reserve in each season. Clearly, an injury-prone UDFA lineman from a small school is a long shot, but the Texans have little depth at offensive tackle.

The Redskins have re-signed safety Deshazor Everett to a multi-year deal, per a team announcement. Everett was scheduled to be a restricted free agent.

Everett stepped up into a larger role for the Redskins this year amidst injuries in the secondary. Appearing in 14 games (eight starts), Everett set new career highs in tackles (52), passes defensed (5), and forced fumbles (1).

This year, the original round tender is set at $1.907MM. The Redskins feasibly could have applied the tender to Everett to have the first right of refusal, though they would not have received any draft compensation for the former UDFA if he signed elsewhere.