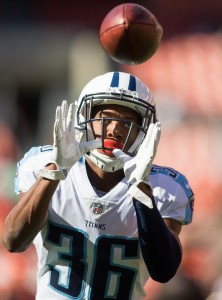 Titans Acquire No. 157 Pick From Broncos

The Titans have traded back into the fifth round, according to Mike Klis of 9NEWS, who tweets that Tennessee has acquired the No. 157 overall pick from the Broncos. The Titans led off the fifth round by snagging UMass wide receiver Tajae Sharpe and have now landed a second pick, which they used to draft Southern Utah cornerback LeShaun Sims.

In exchange for the No. 157 overall pick, the Broncos have received the 176th overall pick (a 2016 sixth-rounder) and a sixth-round pick for 2017, per Cameron Wolfe of the Denver Post (Twitter link). The Titans also picked up a 2016 seventh-rounder in the deal, which falls at No. 253 — that’s the last pick of this year’s draft, so Tennessee is currently in line to select this year’s Mr. Irrelevant.

One reason the Broncos may have added this 2017 selection: the trade with the Eagles for a conditional ’17 choice that brought Mark Sanchez to Denver now looks like it will be for a sixth-round pick and not a seventh-rounder, Klis tweets. The presumptive Week 1 starter for the Broncos, Sanchez was traded for a conditional 2017 draft choice last month.

The Broncos initially acquired this fifth-round choice from the Jets in the teams’ Ryan Clady swap — one that also involved Denver sending a seventh-rounder to New York — earlier this month. The defending champions now hold three picks in the draft’s final two rounds.

Tennessee selected a safety during its busy Day 2 in Kevin Byard of Middle Tennessee but could use some help at corner presently beyond starters Jason McCourty and Perrish Cox. The Titans also added to the position by signing Brice McCain, however.

Owners of the fourth pick in the draft, the Cowboys’ selection window resides in the neighborhood where Bosa currently is expected to go off the board, with the team in need of running back help as well.

Here are some other draft items as we advance further into the month where prospects dominate the NFL news cycle.