The Bills took care of two members from their quality 2017 draft, extending Tre’Davious White and Dion Dawkins last year. But the other key player from that haul may need to land his second contract elsewhere.

Matt Milano is less than a month from free agency, and John Wawrow of The Associated Press notes the Bills are set to let the linebacker test the market. A 38-game starter in Buffalo in four seasons, Milano profiles as one of the top defenders available. If the Bills do not extend Milano by March 15, he will be free to discuss deals with other teams. Free agency officially begins March 17. 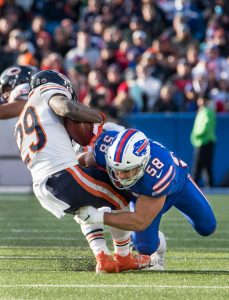 Buffalo still has Josh Allen on his rookie contract, but he is now extension-eligible. The Bills are planning to discuss such a move this offseason. Linebacker Tremaine Edmunds also becoming eligible for a big-ticket extension last month further points Milano to free agency. The Bills also gave A.J. Klein a three-year, $18MM deal in 2020. Milano injuries last season led to an expanded role for Klein.

“We’d love to be able to get Matt back,” GM Brandon Beane said recently. “He knows that. I shared that with him, and I’m sure Sean has as well. The business side matters. He wants to and he’s earned the right to go to free agency and see what his market bears.”

As of Saturday, the Bills are $1MM over the projected $180MM salary cap. While the cap has not been established yet, a pandemic-induced reduction from the 2020 number ($198MM) has long been expected. That will make it more difficult for teams to retain certain free agents and force more cap casualties.

Although the franchise tag is available for the Bills, off-ball linebackers are not commonly tagged. Since the tag system groups all linebackers together, the pass-rushing sect of this group raises the position’s tag number and makes it difficult to justify teams tagging traditional ‘backers. The last off-ball ‘backers to be tagged were the Jets’ David Harris and Vikings’ Chad Greenway in 2011.

Milano joins Lavonte David, K.J. Wright and Jayon Brown among linebackers set for free agency. Milano and Brown are still in their mid-20s, with David and Wright respectively set for their age-31 and age-32 seasons. An IR stay limited Milano to 10 games last season. Pro Football Focus graded the former fifth-round pick as a top-30 linebacker in both the 2018 and ’19 seasons, however.

Linebacker Matt Milano should be one of the top free agents available at his position…if he makes it that far. While speaking to reporters last week, Bills general manager Brandon Beane “did not rule out using the franchise tag” on the 26-year-old (per Jourdon LaBarber of the team’s website). 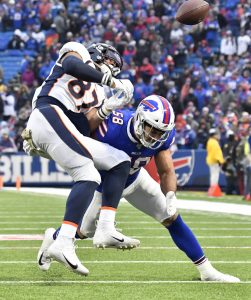 “We’d love to be able to get Matt back,” Beane added. “He knows that. I shared that with him and I’m sure Sean has as well. The business side matters. He wants to and he’s earned the right to go to free agency and see what his market bears.

“We’ll do our best to retain him and as many guys as we can. We just don’t even know the numbers yet and what it’s going to be. There’s going to be some tough decisions unfortunately for us, whether it’s letting guys go on this roster or having to watch guys leave.”

Matthew Fairburn of The Athletic adds some additional context, noting that the franchise tag would be a realistic option if the two sides can’t agree to a long-term pact. However, considering the expected $15MM franchise price for linebackers, Buffalo would likely have to cut a few players to retain financial flexibility. Sheil Kapadia and Aaron Reiss of The Athletic agree with the franchise-tag sentiment, noting that a Milano tag would be similar to last offseason when the Patriots and Vikings surprised many by franchising guard Joe Thuney and safety Anthony Harris, respectively.

A 2017 fifth-round pick, Milano has spent his entire career with the Bills, including a 2019 campaign where he compiled career-highs in games started (15) and tackles (101). He was limited to only 10 games (five starts) in 2020 due to a pectoral injury, but he still managed to compile 45 tackles and 3.5 sacks. He started each of the Bills’ three playoff games, collecting an additional 25 tackles.

Matt Milano missed time earlier this season but returned to play in Buffalo’s previous two games. However, he will be shelved for at least the Bills’ next three.

The Bills placed the fourth-year linebacker on IR Saturday. They had declared Milano out for Sunday’s game against the Seahawks due to a pectoral injury. He did not practice this week.

This is concerning for the Bills due to Milano’s initial injury absences — in Weeks 3 and 4 — coming because of a pec injury. Since returning, Milano has played a part-time role, coming off the bench and playing less than a third of Buffalo’s defensive snaps.

A Bills starter since his rookie year, the former fifth-round pick engaged in extension talks with the team this offseason. Milano, who made 101 tackles last season, has been a quality coverage linebacker for a team that has featured a top-tier pass defense. The Bills’ defense has regressed in his abbreviated season; DVOA places the team’s pass defense 22nd after top-five finishes in 2018 and ’19.

The Bills wrapped up extensions for fellow 2017 draftees Tre’Davious White and Dion Dawkins, leaving Milano in limbo. That raises the stakes for the remainder of his season, should he return from what appears to be a setback.

Still in Josh Allen‘s rookie-contract window, the Bills operated aggressively this offseason by adding Stefon Diggs, Josh Norman and a host of defensive linemen. They are turning their attention to extensions for some of their own players, however.

“Matt and Dion, they have the same representative so that’s a one-call, one-stop shop,” Beane told Steve Tasker during an appearance on One Bills Live (viaNewYorkUpstate.com). “Yeah, definitely have been in contact. You know, I don’t really like to get into negotiations too much, but I’ve definitely been in contact with their representatives giving them timelines of when we would look at things like that.”

Beane hinted at the post-draft offseason period being the window for potential re-ups for Dawkins and Milano. The Bills have an additional year to work on a Tre’Davious White deal, thanks to their 2017 first-rounder having a fifth-year option in his rookie contract.

Dawkins, a 2017 second-round pick, and Milano (a fifth-rounder that year) have been key to Buffalo’s recent rise. Each has been a starter since his rookie season. Milano racked up a career-high 101 tackles last season, and Dawkins rated as a top-30 tackle last season (per Pro Football Focus).

Bills linebacker Matt Milano is done for the year, according to head coach head coach Sean McDermott. Milano had surgery for a broken fibula on Monday, which will rule him out for the rest of the regular season and land him on injured reserve.

Milano, 24, has been a staple of the Bills’ D since entering the league as a fifth-round pick in 2017. This year, he recorded his first sack in a huge upset win over the Vikings and came away with AFC Defensive Player of the Week honors for his performance.

Without Milano, the Bills will likely promote Deon Lacey to the starting lineup, putting him alongside middle linebacker Tremaine Edmunds and strong side linebacker Lorenzo Alexander. It’s a thin unit after that, so the Bills are likely to add another LB this week.

The Bills came out of Sunday’s loss to the Jets with a score of injuries, including day-to-day injuries for running backs LeSean McCoy (hamstring) and Chris Ivory (shoulder).