Following the tragic and unexpected death of offensive line coach Tony Sparano this week, the Vikings have made some adjustments to their coaching staff. Ben Goessling of the Star Tribune reports (via Twitter) that the team will names Clancy Barone and Andrew Janocko co-coaches for the offensive line.

Barone, who’s been working in the NFL since 2004, was the Vikings tight ends coach last season. With the reorganization of the coaching staff, senior offensive assistant (and former Raiders offensive coordinator) Todd Downing will take on the tight ends gig. Meanwhile, Janocko had previously served as the team’s assistant offensive line coach.

NFL.com’s Ian Rapoport notes (via Twitter) that the team had also pursued former Vikings head coach Mike Tice for the offensive line job. We heard back in February that the 59-year-old was eyeing retirement.

NFL teams searching for new general managers aren’t only looking for evaluators, as Albert Breer of TheMMQB.com writes. Instead, ownership groups want candidates who can not only spot talent, but communicate with staff, engage with each department within the team, and manage personalities. “This job, you can’t just watch tape all day,” an NFC GM told Breer. “You have the equipment guy reporting to you, the video guy reporting to you, you’re managing the roster, working with the cap guy, handling the owner. There’s a difference between being a personnel director and being a GM. They’re different jobs. … And I think with [ex-Panthers GM Dave] Gettleman and [ex-Chiefs/current Browns GM John] Dorsey, it was more, ‘I just wanna watch tape.’”

Let’s take a look at the highlights from the rest of Breer’s column:

The contract for Raiders offensive line coach Mike Tice expired after their season ended, but the team made retaining him a high priority. It’s now official that Tice will return to the Raiders next season, per Adam Caplan of ESPN (Twitter link). 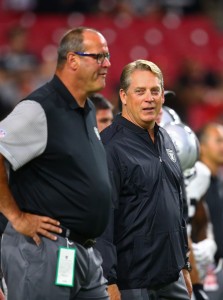 With Tice coming back, the only offensive coach the Raiders will lose from 2016 is previous coordinator Bill Musgrave, whose contract they didn’t renew. Musgrave is now the quarterbacks coach with AFC West rival Denver, while Oakland tabbed its own former QBs coach, Todd Downing, to replace him.

The Raiders had one of the NFL’s top offenses this season, which was thanks in large part to their Tice-coached line. Pro Football Focus ranked the Raiders’ front five as the fourth-best unit in the league. Stalwarts Donald Penn, Kelechi Osemele and Rodney Hudson were the group’s premier players.

Tice, who’s best known for his run as the Vikings’ head coach from 2002-05, has worked as an offensive assistant with various teams since his tenure in Minnesota ended. Next season will be his third with the Raiders.

As the Dolphins and Steelers do battle, let’s take a look at some notes from around the league:

The stadium proposal that didn’t exactly receive rave reviews leaves some unanswered questions regarding the feasibility of its completion and, naturally, the Raiders‘ future in Oakland, writes Matthew Artz of the Bay Area News Group.

Chief among them, writes Artz, is whether the stadium can be built for the $900MM budgeted, and if not, what’s the plan if additional funds are required? Artz points out how Levi’s Stadium was slated to cost $937MM but ended up running a $1.3 billion tab.

The project would have to be financed entirely by the NFL and the Raiders, and the proposed 55,000-seat stadium would be smaller and is projected to generate less revenue than what’s being discussed in Carson, Calif. But before seeing a cost breakdown, which the Raiders have not released, determining the project’s viability is difficult, executive director of the Sports Business Institute at USC’s School of Business David Carter told Artz.

Here are some more details from around the league on Independence Day eve.

Addressing reporters at Jack Del Rio‘s introductory press conference today, Raiders owner Mark Davis announced that CFO Marc Badain had been named team president, and indicated that Del Rio “has all the resources he needs” to go out and hire assistant coaches (Twitter links via Ian Rapoport and Albert Breer). And it appears that Del Rio has taken advantage of those resources to land his first offensive assistant — Michael Silver of NFL.com reports (via Twitter) that the Raiders will hire Falcons assistant Mike Tice to coach their offensive line. The Falcons had previously been reluctant to grant Tice permission to speak to the Raiders, but were convinced to change their stance after Tice pleaded his case, tweets Silver. Oakland is also expected to formally contact Marc Trestman soon about the team’s offensive coordinator position, says Vic Tafur of the San Francisco Chronicle (via Twitter).

Here’s more from across the AFC, as the week winds down and we look forward to championship weekend: