Seahawks owner Paul Allen has died at the age of 65. The Northwest billionaire succumbed to complications of non-Hodgkin’s lymphoma on Monday afternoon.

“My brother was a remarkable individual on every level. While most knew Paul Allen as a technologist and philanthropist, for us he was a much loved brother and uncle, and an exceptional friend,” Paul’s sister Jody Allen, said in a statement. “Paul’s family and friends were blessed to experience his wit, warmth, his generosity and deep concern. For all the demands on his schedule, there was always time for family and friends. At this time of loss and grief for us – and so many others – we are profoundly grateful for the care and concern he demonstrated every day.”

Allen was well-known in the sports world as the owner of the Seahawks and the NBA’s Portland Trail Blazers. Of course, his cultural significance spread well beyond that realm. As the the co-founder of Microsoft, Allen’s work made an indelible impression on technology and human interaction. His net worth was believed to be somewhere in the realm of $20 billion, making him one of the 100 richest people in the world.

There’s no word yet on the Seahawks’ succession plan for ownership.

While a new avenue with the Seahawks has opened up, albeit with a rather significant hiccup early in that process, Colin Kaepernick remains embroiled in a collusion lawsuit with the NFL.

The latest owner deposed in the case, Jerry Jones, has been the most vocal about players standing for the national anthem. As he did for the depositions of Texans owner Bob McNair and Ravens decision-makers Ozzie Newsome and John Harbaugh, Kaepernick is sitting in on the proceedings, Charles Robinson of Yahoo.com reports. This deposition in Frisco, Texas, is scheduled to last several hours. 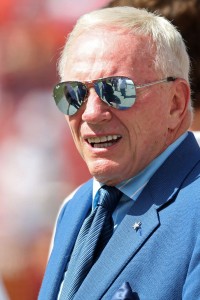 Jones is one of many owners scheduled to be deposed in this case. In addition to previously reported members of the deposition list — Patriots owner Robert Kraft, 49ers CEO Jed York and Pete Carroll — Dolphins owner Stephen Ross and Seahawks owner Paul Allen are also on this docket, Robinson reports. The Yahoo reporter notes Jones’ inclusion stems from several factors, among them comments he made about retribution for Cowboys who protested during the anthem and conversations Jones had with President Donald Trump about the NFL’s response to protests during anthems.

The outspoken Dallas owner is among a group of owners who have urged Roger Goodell to end the players’ right to kneel during the playing of the national anthem, and Robinson reports Jones is expected to make another push for this practice to end at the next set of owners’ meetings in May.

This case is not expected to be resolved soon, with Robinson reporting these historic proceedings will likely drag into 2019.

As for a possible Kaepernick/Seahawks agreement, the quarterback’s camp said (video link via Ian Rapoport of NFL.com) the Seahawks issued an ultimatum that hinged on Kaepernick kneeling during the anthem. Word out of Seahawks headquarters was that the franchise wanted a firm plan from the 30-year-old passer about how his role in the racial inequality-centered protest movement going forward. Robinson reports the Seahawks were specific regarding the anthem, and that the former Super Bowl starter declined to make a commitment at this time.

The Seahawks saw Michael Bennett become part of this protest movement last season, refusing to stand during the anthem. A 2017 report also indicated Kaepernick would stand for the anthem if he was signed last season. It’s unclear if that stance has changed, but it certainly remains an issue in the passer landing a contract offer. The Seahawks door is not believed to be closed, but the team also has other Russell Wilson backup candidates in mind.

Mike Shanahan received strong consideration from the 49ers as the team was deliberating over its new head coach, with former players like Steve Young and Ronnie Lott talking to the team on Shanahan’s behalf, says Jason Cole of Bleacher Report (video link). However, according to Cole, a key factor in the Niners’ decision to go with Chip Kelly was the club’s belief that Shanahan wanted to move on from Colin Kaepernick, using San Francisco’s first-round pick to draft a quarterback.

It remains to be seen whether Kaepernick will bounce back under Kelly’s system, given his accuracy issues, but 49ers management has some confidence that the quarterback can still have success in San Francisco, and Kelly appears likely to give him a shot.

Cowboys dynamic receiver Dez Bryant has a very unclear timeline for his return. Initial reports had him returning in 4-6 weeks, while subsequent stories suggested he could miss as many as 10 or 12 games due to his foot injury. However, amidst these conflicting reports, Bryant himself chose to weigh in on these reports via his personal Twitter account.

“Whenever the media can’t talk to me, reports get made like this,” Bryant tweeted. “10 to 12 weeks… we will just see how long I’m out lol. Go cowboys!!”

We’ve heard plenty this week on the status of a long-term extension between the Seahawks and Russell Wilson, but today introduced another element into this process.

Multiple sources informed Pro Football Talk’s Mike Florio of Wilson seeking a larger-than-usual portion of his next contract to be fully guaranteed, and the NFL’s funding rule could be impeding these proceedings. For teams to provide guarantees to players for skill, cap and injury purposes, all of that guarantee is not due upon signing, but must be placed into an escrow account immediately. The issue, according to Florio, is Seahawks owner Paul Allen being reluctant to agree to this stipulation.

Designed to protect players from owners who don’t have the cash to make the future payments, the funding rule wouldn’t seem to play a key component in Wilson’s pursuit of a lofty second deal. Allen is the league’s richest owner by a massive margin, checking in at No. 51 on Forbes’ world billionaires list with a net worth of $17.5 billion. He is the only NFL owner in the top 200; Dolphins boss Stephen Ross‘ $6.5 billion warchest sits at 216th, which is in the neighborhood of several of his contemporaries.

Florio adds that it’s unclear why Allen is reluctant in this case due to his fortune, but that one reason could be a collusion attempt on the owners’ part to avoid widespread fully guaranteed contracts across the league like the ones doled out in the NBA and Major League Baseball. It’s one of the NFL’s shortcomings fully guaranteed deals don’t exist like they do in the aforementioned, and far safer, disciplines, creating a sharper wedge between labor and management.

Bob Condotta of the Seattle Times writes the stakes in Wilson’s deal are rising and now are beginning to represent more than what is best for merely the Seahawks or Wilson. It could be a seminal negotiation that shapes how the players formulate their plan for when the next CBA talks emerge at the dawn of the 2020s. Mark Rodgers, Wilson’s agent, has primarily baseball ties after once negotiated former Rockies pitcher Mike Hampton’s then-record deal worth eight years and $121MM in 2000, and Condotta views this background as to why Wilson’s camp is taking this stance on guaranteed money.

As of now, Wilson will play this season as the league’s 44th-highest-paid signal-caller at a $1.67MM cap number, behind the likes of Johnny Manziel, Drew Stanton and Shaun Hill. This will almost certainly be the last year Wilson’s in this minuscule NFL tax bracket, and the fourth-year quarterback’s chances of staying in Seattle remain high. But this saga continues to unearth nuances that suggest the Seahawks view Wilson’s accomplishments perhaps much differently than his camp does.