The Bills announced that they have signed running back Dan Herron. To make room, the Bills released cornerback Julian Whigham. 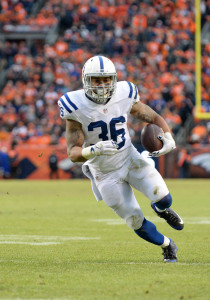 Herron spent time with Buffalo during the 2015 season when the team was ravaged by injuries in the backfield. Now, he could once again provide some depth as LeSean McCoy deals with a hamstring injury. Last year was a somewhat tumultuous year for Herron, who was waived off the Colts’ injured reserve at the beginning of the season. After working out for the Patriots, Herron latched on with the Bills, appearing in four games and registering 11 rushing attempts. Buffalo cut bait with Herron relatively quickly, but Indianapolis, once again the market for a back, claimed him off waivers in order to secure a reunion with the former Ohio State Buckeye. Herron didn’t play much down the stretch, and was let go during the restricted free agent tender period.

Herron auditioned for the rival Dolphins on Monday, but he left without the team making an offer. Miami planned on keeping Herron on their “just in case” list, but Buffalo was ready to scoop him up immediately.

Whigham was struggling in OTAs, Vic Carucci of The Buffalo News tweets. Whigham, a Syracuse product, was originally signed as a UDFA on May 2nd.