Washington running back Silas Redd has been suspended indefinitely by the NFL for violating the league’s policy on substances of abuse, tweets Master Tesfatsion of the Washington Post. While Redd may be reinstated sometime down the line, the decision appears to rule him out for the 2016 season. 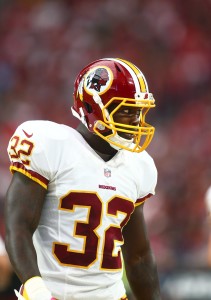 Redd, 24, joined Washington as an undrafted free agent out of USC in 2014, and totaled 182 yards from scrimmage on just 24 touches (16 carries, eight receptions) over the course of 15 games for the team.

As John Keim of ESPN.com observes (via Twitter), Redd wasn’t a lock to earn a regular-season roster spot in 2015, but ultimately tore his ACL in the summer, before roster decisions had to be made.

Since then, Redd has been suspended multiple times by the NFL. In November, a violation of the league’s substance abuse policy cost him four games — while he wouldn’t have been able to play in those games anyway, he lost the pay checks as well due to the ban. Now, faced with an indefinite suspension, Redd likely won’t be a part of Washington’s plans going forward.

Washington running back Silas Redd has been suspended for violating the NFL’s policy on substances of abuse, per Mike Jones of the Washington Post (Twitter link). Like teammate Junior Galette, who was hit with a suspension of his own this week, Redd is on injured reserve, meaning the suspension won’t force him out of action for any games he wouldn’t have missed anyway. However, it will cost him a few game checks. Redd will begin serving the four-game ban immediately, and will miss out on 4/17ths of his base salary for this season.

Here are Sunday’s minor signings, cuts, and other moves from around the NFL:

Though Washington will miss Niles Paul for the entire season after he suffered an ankle injury, the club doesn’t intend to make a major move for a new tight end, tweets Albert Breer of NFL.com. Not only will the team not attempt to swing a trade, but they aren’t interested in Chris Cooley, who is attempting to make an NFL comeback. Earlier today, PFR’s Luke Adams went over Washington’s options as it attempts to replace Paul.

Kearse was a seventh-round pick by the Dolphins in 2011, and most recently spent time with the Panthers in 2013. The latter three players attended rookie minicamp practices on a tryout basis.

THURSDAY, 11:03am: Notre Dame quarterback Tommy Rees rounds out the Redskins’ list of undrafted free agent signings, according to the team.

WEDNESDAY, 4:10pm: Coming into today, the Redskins were one of just three teams that had yet to formally announce their class of rookie free agents. The league has remedied that, officially revealing that Washington has added nine UDFAs to the roster. Courtesy of Zac Boyer of the Washington Times (all Twitter links), here’s the list: