The Redskins have hired former Browns defensive coordinator Ray Horton as their new defensive backs coach, according to John Keim of ESPN.com. Washington is retaining incumbent DC Greg Manusky, but the club has spent the offseason meeting with other defensive minds such as Gregg Williams, Steve Wilks, and Todd Bowles. Horton, unlike those three, doesn’t have prior head coaching experience, but he has been a defensive play-caller for the Cardinals, Titans, and Browns (two stints). Horton, who didn’t coach in the NFL in either of the past two seasons, is replacing Torrian Gray, who was let go earlier this month.

Let’s check in on the latest coaching and front office moves:

Weather-related concerns are forcing the Titans to shift the timeline of their head coaching search, as Albert Breer of TheMMQB.com tweets. Whereas Texans defensive coordinator Mike Vrabel and Rams offensive coordinator Matt LaFleur were originally scheduled to interview with Tennessee on Wednesday and Thursday, respectively, Vrabel and LaFleur will now sit down with Titans general manager Jon Robinson on Thursday and Friday, respectively. Vrabel, LaFleur, and Panthers defensive coordinator Steve Wilks — whose is currently en route to Tennessee for his interivew, per Joseph Person of the Charlotte Observer — are the only definitive candidates for the Tennessee job thus far, but reports have indicated the Titans could also have interest in Eagles OC Frank Reich.

SUNDAY, 12:12pm: The Browns have made the hire official, and as Nate Ulrich of the Akron Beacon Journal tweets, Jackson will allow Williams to bring his own assistants. Therefore, there will be changes on the defensive staff, and Ulrich adds (via Twitter) that Jackson is “not done” evaluating the staff as a whole, so other changes could be on the way. Jackson will, however, retain play-calling duties, as Ulrich tweets.

SATURDAY, 08:22pm: Gregg Williams will replace Ray Horton as the Browns’ defensive coordinator, Jason La Canfora of CBSSports.com reports (on Twitter). The team recently extended an offer for the veteran DC to come in, and as a result, “wholesale changes” are coming to the Browns’ defense, per La Canfora. 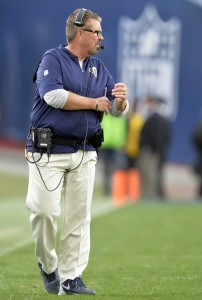 The 58-year-old DC will transition from a Rams defense he helped elevate into one of the more formidable units in the game over the past three years to one that ranked as the No. 31 DVOA group during a horrendous Browns campaign.

Williams was reportedly open to staying in Los Angeles but understood that was unlikely after Jeff Fisher‘s departure. We heard earlier today Williams could bring some Rams assistants to northeast Ohio with him. He also might be bringing a new defense along. The Rams operated as a 4-3 defense during Williams’ years, and the Browns use a 3-4. Although, Cleveland isn’t exactly at the rebuilding stage where it couldn’t retool.

La Canfora confirms Williams plans to bring three or four coaches to with him to Cleveland, adding that Hue Jackson signed off on this change despite being close to Horton. The reporter adds Horton became unpopular on the personnel side of the organization.

Rebounding after the Bountygate scandal forced him off the sidelines for a year, Williams helped the Rams elevate into an upper-echelon defense this season despite one of the league’s worst offenses. The Browns boasted the league’s No. 27 defense in 2015 and 31st-ranked outfit this season, the latter coming after the organization made a change to go with a grass-roots rebuilding operation. That came after several recent rebuilds failed, but the Browns will have a proven DC around which to construct a stoppage corps in the near future.

This will be Williams’ seventh DC gig, with a three-year HC tenure with the Bills coming in between that lengthy run that dates back to running the Tennessee Oilers’ defense in 1997.

The Browns’ firing of defensive coordinator Ray Horton is not yet official, but the team is leaning toward making a change, Ian Rapoport of NFL.com was among those to report (Twitter link). Should Horton get the ax, Rams defensive coordinator Gregg Williams would be in prime position to succeed him in Cleveland. The Browns have given Williams until Monday to accept the job, according to Sporting News’ Alex Marvez (Twitter link). 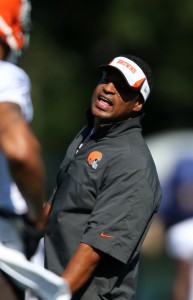 The Browns were a dumpster fire on both sides of the ball this year, but head coach Hue Jackson apparently feels that the team will need a philosophical change on defense. This year, the Browns finished next-to-last in defensive DVOA and they would have been dead last if it weren’t for the Lions’ awful ratings.

Williams is currently in the midst of his second stint as the Rams’ defensive coordinator. After coach Jeff Fisher was canned, the Rams informed all assistants that they were free to seek other jobs. Williams, naturally, isn’t just waiting around to see if the next head coach in L.A. wants to keep him on board. However, the Cleveland job might not be the gig he has his eye on. There are better situations out there from a personnel standpoint, including the Redskins gig.

Phillips has enjoyed great success in Denver, but he is on an expiring contract and unlikely to return. Phillips would be a splashy hire for a Browns team desperately seeking advancement in 2017.

Ray Horton‘s first season in Cleveland hasn’t gone as planned. The Browns’ defensive coordinator has struggled mightily through the team’s first 11 games. Not only are the Browns winless, but the defense ranks towards the bottom of the league in nearly every statistical category. 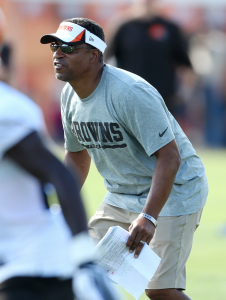 “Horton is a very unpopular pick in various quadrants of the organization to return as defensive coordinator but is supported staunchly by [head coach Hue] Jackson,” the reporter wrote.

Horton addressed these reports yesterday. Unsurprisingly, the long-time coach told Mary Kay Cabot of Cleveland.com that he’s not worried about his job security.

Horton cited the mediocre records of Tom Landry, Bill Walsh and Jimmy Johnson when they were first getting started in the NFL, noting that it takes some time to build a competent team or unit.

“I’m not comparing myself to them, please do not think I am – but you go through things in this business,” he said. “Locally, you look at the Cleveland Cavaliers. They had LeBron, LeBron left and LeBron came back. There are a lot of pieces to the puzzle, and to answer your question very bluntly, I don’t live that way. I never have, and hopefully, I never will.”

Is the coach at least seeing some improvement from his defense?

“When you talk to coaches on other teams, they see it. A lot of times, it is hard to see the forest through the trees, but we have some guys that are playing very well that are going to be the foundation of our team. They’re going to be the ones that help us get over the top.”

Following two seasons with the Titans, Horton returned to the Browns this offseason. The 56-year-old was Cleveland’s defensive coordinator in 2013.

The Dallas Police Department obtained medical records for Colleen Crowley this week as part of the criminal investigation into whether Johnny Manziel assaulted her, according to ESPN.com’s Pat McManamon. Crowley filed a complaint weeks ago alleging that the Browns quarterback assaulted her and ruptured her eardrum. In Texas, causing serious injury could be considered aggravated assault, which is a felony. According to a source, as of one week ago, Crowley could not hear out of her left ear.

Manziel won’t be a member of the Browns much longer as the team is expected to cut him in March. Earlier today, the Browns held an introductory press conference for their new coaches and those coaches fielded questions on players who will be a part of the club in 2016. Here’s a look at some of the highlights:

Although Hue Jackson‘s recent comments have seemingly indicated a preference the Browns move on from Johnny Manziel, Jimmy Haslam knows the sides can mend their damaged relationship, according to Nate Ulrich of the Akron Beacon Journal.

The Browns’ owner admitted both his regime and the team’s previous power structure have made critical misjudgments in the draft, he does not like the idea of moving on from a No. 1 pick that’s contributed so little to the franchise.

“Oh, yeah, I don’t think there’s any question about that,” Haslam told media about being able to go forward with Manziel. “We talked to Johnny before he left [for the offseason]. I know a big deal was made that Hue hasn’t called Johnny yet. Well, we’ve got 53 players on the active [roster] and 10 more [on reserve/futures deals], and there were a couple of other real prominent players that he just talked to in the last day or two. So I’m sure he’ll get around to talking to him.”

Jackson hasn’t sounded too optimistic regarding Manziel, who entered rehab but endured several alcohol-related slip-ups during the season, with the new Cleveland coach saying Manziel’s alleged secret excursion to Las Vegas while in concussion protocol would have been a “non-starter” under his watch. In between, the 23-year-old Manziel started six games and completed 57% of his passes, throwing for seven touchdowns and five interceptions.