The Colts have converted $9MM of Ryan Kelly‘s salary into a signing bonus (Twitter link via Field Yates of ESPN.com). As a result, they’ll have an additional $6.75MM in cap room to work with.

Kelly, who was recently activated from the reserve/COVID-19 list, signed a four-year, $50MM re-up with the Colts exactly one year ago. The former first-round pick received $34MM in guaranteed cash as a part of the deal, making him the highest-paid center in the league at the time of signing. He’s since been leapfrogged by Frank Ragnow (Lions; $13.5MM) and Corey Linsley (Chargers; $12.5MM).

The Colts drafted Kelly No. 18 overall in 2016. The Alabama product made his first Pro Bowl in 2019 as the Colts placed third in Pro Football Focus’ O-line rankings. He earned Pro Bowl nod N0. 2 last year and the Colts are hoping for more of the same, especially with star guard Quenton Nelson at less than 100%.

More good news for the Colts’ foot-injury ward. Both Carson Wentz and Quenton Nelson are set to be back at practice Monday, according to Frank Reich.

While each will be back on the field in a limited capacity, this news bodes well for the prospect of each starting the season on time. This possibility emerged last week, and nothing has taken place to indicate that was an overly optimistic timetable. Pro Bowl center Ryan Kelly will also be back at practice Monday, per Reich. Kelly has been out with an elbow injury.

Both Wentz and Nelson underwent foot surgeries in early August. The Colts initially announced a vague five- to 12-week timetable for Wentz, with the latter outcome thrusting the likes of Jacob Eason and Sam Ehlinger into the spotlight. Indianapolis may soon be off the hook from having to use either as a September spot starter, though Wentz missing extensive training camp time certainly hurts as he prepares to start for a new team.

Nelson, who has never missed a game as a Colt, has emerged as perhaps the NFL’s premier guard. He is 3-for-3 in first-team All-Pro appearances; no other post-merger offensive lineman has accomplished that feat. Nelson will be on track for a record-setting extension come 2022, with the Colts having already taken care of 2018 draftees Darius Leonard and Braden Smith.

The Colts are currently battling issues on their O-line, which has just Smith and Mark Glowinski healthy among the team’s optimal first-string quintet. But with Nelson and Kelly on their way back, Eric Fisher‘s timeline would be the only uncertain matter on the Colts’ offensive front.

Ryan Kelly‘s extension talks progressed to an accepted offer Thursday. The Colts have announced they extended their veteran center.

The former first-round pick signed a four-year, $50MM contract, Adam Schefter of ESPN.com tweets. Kelly will receive $34MM in guarantees. In terms of per-year salary and guarantees, this contract makes Kelly the NFL’s highest-paid center by a comfortable margin.

Going into what was set to be a contract year, Kelly said at multiple junctures this year he sought a long-term stay in Indianapolis. This represents a key commitment for a Colts team that returns all five of its offensive line starters, forming one of the league’s top fronts. They re-signed left tackle Anthony Castonzo in March, ensuring their entire quintet would be back for the 2020 season.

Kelly’s $12.5MM-per-year average comes in well north of Rodney Hudson‘s previous center high-water mark, topping the market by more than $1MM in average annual value. The guarantees given to the Colts snapper top the previous No. 1 figure by $5.5MM. Kelly, 27, is now signed through the 2024 season.

The Colts drafted Kelly 18th overall out of Alabama in 2016. He made his first Pro Bowl last season, when the Colts placed third in Pro Football Focus’ year-end O-line rankings. Philip Rivers has said the Colts’ O-line played a key role in his decision to sign with Indianapolis. Rivers’ eventual successor will now be set to take snaps from Kelly, who has ranked as a top-10 center — per PFF — in each of the past two seasons.

Ryan Kelly‘s camp is discussing an extension with Colts GM Chris Ballard, according to the center (Twitter link via Zak Keefer of The Athletic). As it stands, Kelly has one year left on his rookie deal, via the fifth-year option.

[RELATED: Colts Want To Bring Back Philip Rivers In 2021]

Kelly says that he wants to spend his “entire career in Indianapolis” and Ballard is likely on board with that plan. Last year, Kelly started in all 16 of the Colts’ regular season games and anchored one of the league’s best offensive lines. He earned his first ever Pro Bowl nod for that campaign and he’ll likely score a major contract to match.

As he enters the fifth and final season of his rookie deal, center Ryan Kelly is eyeing a new deal that will keep him with the Colts for the long run, as Jim Ayello of the Indianapolis Star writes.

“Hopefully they value what I do,” Kelly said. “If not, then I understand. But I love it here. I want to stay here. This is my home. I got a house here because I love the city. The guys in the room, I love what we’ve developed on this team. It’s certainly a lot different than it was when I first walked in the door Day 1. Time will tell. But right now, yeah, this is definitely where I want to be.”

Kelly earned $3.325MM this year and he’ll see a bump to $10.35MM under the fifth-year option in 2020. A new deal might only give the Colts a slight bit of cap relief – he’s likely looking at an average annual salary of $9-$12MM, putting him in line with the upper crust of NFL centers.

Recent extensions for Bucs centers Ryan Jensen and Bills center Mitch Morse figure to be comps for Kelly, a former first-round pick. Jensen inked a four-year, $42MM deal with Tampa Bay prior to the 2018 season with $22MM guaranteed. Morse, meanwhile, landed a four-year, $44.5MM deal with Buffalo in March, making him the league’s highest-paid center in terms of overall dollars. That deal included $26.175MM in practically guaranteed dollars – the fourth-highest at the position.

Thanks in large part to Kelly, the Colts boast one of the league’s top offensive lines in the NFL. They won’t qualify for the playoffs this year, but a new long-term deal with Kelly could position them well for 2021 and beyond.

The 2019 draft is officially in the rearview mirror. Coaches and front office heads are holding post-draft press conferences, and some news is beginning to trickle out of them. 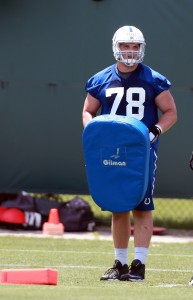 Colts GM Chris Ballard said at his press conference that the team will pick up the fifth-year option on center Ryan Kelly‘s contract, per Joel Erickson of the Indianapolis Star (Twitter link). Kelly was taken by the Colts 18th overall back in 2016. This isn’t too surprising, as Kelly has been a starter since his rookie season. We don’t know the exact terms of the option yet, but it’ll pay him somewhere close to $10MM.

The fifth-year option is only guaranteed for injury, so it doesn’t actually ensure Kelly will be with the team at that price in 2020. Kelly has been a bit banged up the past couple of years, missing four games in 2018 and nine games in 2017. But he’s been solid when he’s been able to stay on the field, earning Pro Football Focus’ 14th-best grade among all centers last year.

Indianapolis’ offensive line took a major step forward last year, and was a huge part of the team’s success. Keeping Andrew Luck upright is the most important thing for the team, and they clearly view Kelly as the longterm answer at center. An Alabama product, Kelly will turn 26 next month.

Teams have until May 3rd to pick up the options on their 2016 first round picks. You can view the tracker with each team’s decision here.