The 49ers’ running back search is underway. This week, the team will meet with T.J. Yeldon, Duke Johnson, and Lamar Miller in the wake of Raheem Mostert‘s season-ending injury. (Twitter link via Adam Schefter of ESPN.com). 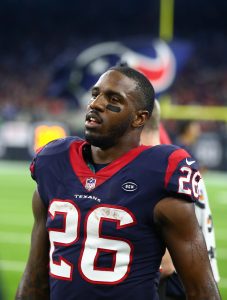 Johnson caught on with the Jaguars earlier this month but was released after just nine days on the taxi squad. Johnson, 27, did not see the field during his lone week in Jacksonville, residing as an insurance option behind the likes of James Robinson, Carlos Hyde and Dare Ogunbowale. A former third-round pick, Johnson began his career with five straight seasons of 400-plus receiving yards. He topped out at 693 for the 2017 Browns, despite having started just 12 games in that span.

Miller has been on the market ever since he was released by Washington in August. The 2018 Pro Bowler, who has two 1,000-yard rushing seasons on his resume, has not been the same since his a torn ACL wiped out his 2019.

Yeldon, 26 in October, spent the offseason with the Bills. After a 182-carry rookie campaign, the former second-rounder ended his Jaguars stay as the team’s third-string running back behind Leonard Fournette and Carlos Hyde. Still, Yeldon managed a respectable 4.0 yards per carry last season and has hit the 5.0 ypc mark in the past.

The Bills are set to sign running back T.J. Yeldon, according to Adam Schefter of ESPN.com (on Twitter). When finalized, it’ll be a two-year deal for the veteran. 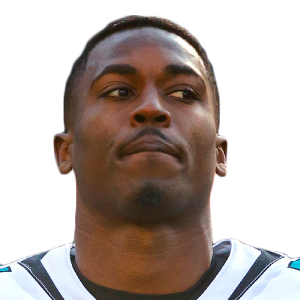 The 25-year-old (26 in October) met with the Patriots earlier in the month but wound up signing with a different AFC East team. With Buffalo, Yeldon will serve as a backup behind LeSean McCoy and Frank Gore, two talented players who are both on the other side of 30.

Jacksonville scaled back Yeldon’s role over time. After a 182-carry rookie season, the former second-round pick ended his Jaguars stay as the team’s third-string running back behind Leonard Fournette and Carlos Hyde. Still, Yeldon managed a respectable 4.0 yards per carry last season and has hit the 5.0 ypc mark in the past.

T.J. Yeldon spent Tuesday touring another AFC East team’s facility. After meeting with the Patriots last week, the former Jaguars running back is visiting with the Bills, Adam Schefter of ESPN.com tweets. 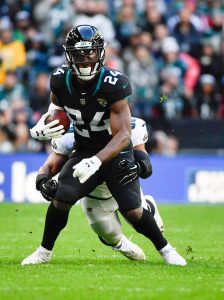 The Bills have two All-Decade team-caliber backs in LeSean McCoy and Frank Gore, but both are north of 30. Entering what would be his fifth season, Yeldon would obviously represent fresher legs.

Jacksonville, however, diminished Yeldon’s role as his time in north Florida progressed. After a 182-carry rookie season, the one-time second-round pick ended his Jaguars stay as the team’s third-string running back — behind Leonard Fournette and Carlos Hyde. Yeldon has averaged north of 5.0 yards per carry, however, doing so as recently as 2017. He averaged 4.0 yards per handoff last season.

The 25-year-old runner was the Jags’ top pass-catching back for a while, however, and he hauled in a career-high 55 passes for 487 yards and four touchdowns last year. McCoy is obviously one of the best receiving backs of this era, but he is going into his 11th season. Only two Bills — wideouts Robert Foster and Zay Jones — surpassed Yeldon’s receiving-yardage total last season.

In Year 3 of the Brandon Beane/Sean McDermott partnership, the Bills have used free agency revamped their offense considerably. John Brown and Cole Beasley are in place at wide receiver, with Tyler Kroft now at tight end. Several new linemen are now on the roster as well. Yeldon would be a similar step for a Bills team that has changed up most of its McCoy supporting cast.

The Patriots hosted wide receiver Demaryius Thomas and running back T.J. Yeldon on Wednesday, according to Field Yates of ESPN.com (Twitter link).

New England would make sense as a potential landing spot for Thomas on a number of levels. The 31-year-old pass-catcher was originally drafted by then-Broncos head coach Josh McDaniels, who is now the Patriots’ offensive coordinator. The Pats reportedly expressed interest in acquiring Thomas from Denver before he was dealt to Houston, and New England needs offensive help given the loss of Rob Gronkowski and Cordarrelle Patterson, the potential loss of free agent Chris Hogan, and the uncertain status of Josh Gordon.

While Thomas would give the Patriots another option on their wide receiver depth chart, he’s certainly not the threat he once was. While splitting time between Denver and Houston in 2018, Thomas posted only 59 receptions for 677 yards, his lowest totals since 2011 (before he was a full-time starter).

Thomas tore his Achilles in December, and it’s not clear when he’ll be able to return to the field. Additionally, he was taken into police custody after being involved in a car accident in February. There’s been no new information on Thomas’ legal status recently, but each of these factors will likely make him an affordable potential signing for the Patriots.

Like Thomas, Yeldon hasn’t drawn any other known free agent interest since the market opened in mid-March. After starting for the Jaguars during his first two years in the NFL, Yeldon became a backup after Jacksonville drafted Leonard Fournette in 2017. Yeldon has averaged only four yards per carry since entering the league, but he’s been a consistent weapon in the passing game, averaging about 43 receptions per season. Football Outsiders ranked him among its top-20 most efficient pass-catching running backs in 2018.

The Jaguars are apparently looking to move on from a pair of veterans. ESPN’s Adam Schefter reports (via Twitter) that the organization is trying to trade defensive tackle Malik Jackson and running back Carlos Hyde. The team is hoping to make a move by the start of the league year on March 13th. 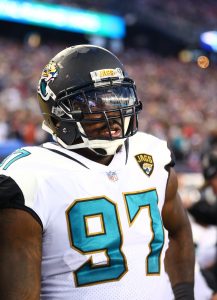 Jackson hasn’t missed a game with the Jaguars since he inked a massive six-year, $85.5MM contract ($31.5MM guaranteed) back in 2016. He started all 32 of his games during his first two seasons in Jacksonville, and he earned a Pro Bowl nod in 2017. However, he took a bit of a step back in 2018, and he was ultimately benched for Taven Bryan down the stretch. He finished the season with 32 tackles and 3.5 sacks, with Pro Football Focus ranking him 85th among 112 interior defenders.

Hyde joined the Jaguars in a midseason trade with the Browns, and he proceeded to run for 189 yards and zero touchdowns in eight games (two starts). Hyde has two more years remaining on his deal, but Jacksonville does have the ability to get out of the contract this offseason. With T.J. Yeldon hitting free agency, the team could also decide to retain Hyde as Leonard Fournette insurance.

We heard yesterday he was being fired, and the Todd Bowles era ended in very disappointing fashion today. The Jets were destroyed by the Patriots by a final score of 38-3. The defense was shredded by Tom Brady, and the unit was without one of their top players in Trumaine Johnson. Johnson was a healthy scratch, and it was because he was a no show for meetings and practice this week, according to Josina Anderson of ESPN (Twitter link).

Johnson said after the game that he overslept and was late to practice on Wednesday, and that that’s why he was benched, according to Darryl Slater of NJ.com. Johnson was signed away from the Rams this offseason with a massive contract, and has mostly been a disappointment. He’s played pretty well overall, but not at the level to deserve the five-year $72MM contract New York handed him. While GM Mike Maccagnan likely wishes he had that one back, his contract makes it impossible to move on until 2020 at the earliest, Rich Cimini of ESPN.com notes. Jason Fitzgerald of Overthecap.com thinks the Jets might be “trying to set the stage” for a suspension of some sorts that could void guaranteed money in his contract. Any such actions would surely draw a stiff challenge from the player’s union.

We heard earlier today that the Seahawks are still trying to trade for a veteran left tackle, and they are willing to part with TE Jimmy Graham in order to facilitate such a deal. With the league’s trade deadline just two days away, let’s take a look at more trade rumors from around the league:

Within his latest Inside the NFL Notebook piece, Albert Breer of the NFL Network takes a deep dive into Washington‘s season, examining the type of player the team has targeted under head coach Jay Gruden and new GM Scot McCloughan. Washington’s first major draft pick (No. 5 overall selection Brandon Scherff) and long-term signee (Ryan Kerrigan) in 2015 checked all the boxes the club was looking for in terms of intangibles.

“If you’re gonna spend some money, you want talent, but you also want strong leadership, guys you don’t have to worry about Friday night or Thursday night,” Gruden said. “Guys that are gonna be here, and be in the weight room and lead the way for younger guys. Sometimes, to have these guys in here for a number of years, they pave the way for younger players, and that’s just as important as production.”

Here are a few other topics covered by Breer in his latest column:

The Jaguars have moved a step closer to locking up their entire 2015 draft class, agreeing to terms with running back T.J. Yeldon on his rookie contract. The team tweeted out a photo of Yeldon signing his deal today, following this morning’s practice session.

The 36th overall pick in this year’s draft, Yeldon was the third running back to come off the board, behind first-rounders Todd Gurley and Melvin Gordon. In Jacksonville, the Alabama product will join a young Jags offense that features 2014 draftees Blake Bortles, Marqise Lee, and Allen Robinson, along with free agent addition Julius Thomas.

Per Over The Cap, Yeldon will be in line for a four-year contract worth about $5.914MM. Because he fell just outside the first round, Yeldon won’t have a fifth-year option on his contract, but he’ll get a signing bonus worth approximately $2.561MM.

With Yeldon locked up, the Jaguars have signed seven of their eight draftees. Only third-round offensive lineman A.J. Cann remains unsigned.