Taysom Hill will not have his most accomplished blocker in front of him Sunday in Denver. Terron Armstead confirmed reports he has tested positive for COVID-19 (Twitter link). 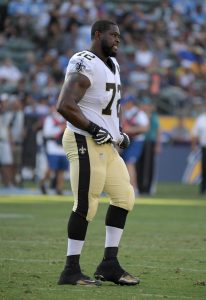 Armstead learned of his positive test Saturday morning, putting him in line to next week’s game against the Falcons as well. The Saints will be without their starting left tackle and quarterback for a bit. They are already without left guard starter Andrus Peat.

A full-time Saints starter since his second season (2014), the former third-round pick has become one of the league’s best O-linemen. Armstead has served as a vital component of Alvin Kamara‘s breakthrough, making the past two Pro Bowls as the longest-tenured member of New Orleans’ high-end O-line.

James Hurst stands to be the next man up. The former Ravens starter has served as the Saints’ swing tackle this season, starting twice in place of standout right tackle Ryan Ramczyk.

The Saints are clearing up some cap space. New Orleans has restructured the contracts of receiver Michael Thomas and offensive tackle Terron Armstead, a source told Nick Underhill of NewOrleans.Football (Twitter link).

Underhill adds that they haven’t restructured Janoris Jenkins‘ deal yet, but that it’s a possibility moving forward. The Saints are clearly going all in on 2020 and one or two last rides with Drew Brees, and they’re trying to maximize this window. We just heard that almost all of the money going to Brees this year is a signing bonus in order to reduce his 2020 cap hit, and now they’re getting even more flexibility.

It’s unclear exactly what financial tweaks were made to Thomas and Armstead’s deals, although it’s likely they just had 2020 salary converted to signing bonus money to spread out the cap hits over the duration of their respective contracts. Thomas signed a massive five-year, $100MM extension last July that made him the highest-paid receiver of all time.

The record-breaking wideout is under contract through the 2024 season, and will be in New Orleans long after Brees finally hangs up his cleats. Armstead signed a five-year, $65MM extension back in 2016, and is signed through the 2021 campaign. He had $10.2MM in salary converted to a signing bonus in November of 2018 to create the cap space to sign Dez Bryant.

The Saints added another veteran player earlier today in safety Malcolm Jenkins, giving them more ammo for their 2020 run. With Tom Brady now in the division, the NFC South is about to get a lot tougher.

Terron Armstead missed only one game because of a high ankle sprain he suffered in November, but the Pro Bowl Saints tackle is also dealing with a wrist injury that may require offseason surgery. Armstead underwent a CT scan recently, and although it showed no broken bones or ligament damage, the seven-year veteran acknowledged an offseason procedure is not off the table.

“As far as ligament damage, tendon damage, it’s more of a, ‘If it’s still feeling like this or you can’t pick up anything in two weeks, we got to go further,'” Armstead said, via NOLA.com’s Amie Just.

Although Armstead made the trip to Orlando for the Pro Bowl, he did not play in Sunday’s game. The Saints have their left tackle under contract for two more seasons.

A clause in Alex Okafor‘s Saints contract will allow for the veteran edge defender to gauge his worth again. Okafor signed a two-year deal to stay with the Saints earlier this year, but by registering three sacks this season, he can opt out of his contract and become a free agent, Nick Underhill of The Advocate reports. The starter opposite Cameron Jordan all season, Okafor collected four sacks in New Orleans’ first 15 games. He has until 11am on the final day of the 2018 league year to notify the Saints if he is to opt out of the deal, Underhill adds. Okafor was a free agent in both 2017 and ’18. The Saints drafted Marcus Davenport in the 2018 first round and have Jordan signed through 2020. Okafor would count $4.85MM against the Saints’ 2019 cap.

Were he to opt out, there might be more money awaiting. Okafor has stayed healthy this season and has 8.5 sacks in his two Saints years. With the top-tier free agents-to-be likely not set to leave their current teams, Okafor and second-tier peers will be the next-best options for teams looking to the market to upgrade. Of course, he has not cleared 4.5 sacks since 2014, so expectations for the 27-year-old defender’s next deal should be tempered.

Here’s the latest out of New Orleans:

It’s been a long road for Robert Griffin III. After he was released by the Redskins, Griffin wound up in Cleveland as the Browns’ starting quarterback in 2016. He was immediately injured and ended up playing only a few games, and was released after the year. After that he spent the entire 2017 season out of football, and it looked like his career might be coming to an end. But then Griffin inked a deal with the Ravens out of nowhere this past spring, and made the team. While he’s been the third stringer behind Joe Flacco and Lamar Jackson and inactive most of the season, Griffin is just happy to be back in the league, and he described his journey in a recent sit down with Jeff Zrebiec of The Athletic.

“It’s been special because I was not guaranteed a roster spot at the beginning of the year. I had a non-guaranteed contract, a minimal signing bonus and I had to earn it every step of the way”, Griffin said. Griffin was projected to be cut by most analysts because John Harbaugh has very rarely kept three quarterbacks on the active roster, but he had an impressive preseason and earned a spot. Zrebiec writes the Ravens first became interested in the former Heisman Trophy winner in the summer of 2017, but Griffin thought the timing wasn’t right. Griffin also reflected on his experience losing his job in Washington to Kirk Cousins while he was out with an injury, and how it relates to what Flacco is going through right now. The whole conversation is definitely worth a read.

Saints left tackle Terron Armstead is expected to miss three to four weeks with a pectoral injury, according to Ian Rapoport of NFL.com (on Twitter). Armstead suffered the injury in Sunday’s one-sided win over the Bengals.

The Saints turned to veteran Jermon Bushrod after Armstead’s exit, so it stands to reason that he will start in Armstead’s absence. The Saints also have Michael Ola and tackle/guard Chaz Green to support Bushrod and Ryan Ramczyk, so they don’t necessarily have to add a tackle this week.

With an 8-1 record, the Saints are fighting more for playoff positioning than a postseason berth. They have a comfortable, though not insurmountable, lead over the 6-3 Panthers for the NFC South title and they are second only to the 9-1 Rams in the NFC. Clearly, they did not miss a beat after Armstead’s exit on Sunday, so this is unlikely to unravel the Saints’ passing offense in the coming weeks.

Armstead, 27, ranks as the league’s No. 1 overall tackle this year, according to Pro Football Focus.

The Saints are expected to restructure offensive tackle Terron Armstead’s 2018 salary, as Ian Rapoport of NFL.com tweets. The revised deal will turn the rest of Armstead’s $10.2MM base salary into a signing bonus and create room for the addition of Dez Bryant. 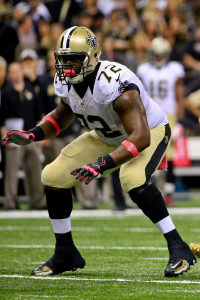 Armstead in the midst of another brilliant season and ranks as Pro Football Focus’ No. 1 ranked tackle in the NFL. If he keeps it up through the second half of the year, he may finally secure the first Pro Bowl nod of his career.

The Saints, with Bryant in the fold, will look to extend their seven-game winning streak when they face the Bengals on Sunday.

We now know that the NFL is investigating an incident regarding Buccaneers quarterback Jameis Winston and an uber driver from last year. The female uber driver claimed that the former number one overall pick groped her during a ride, but Winston has denied those allegations. but adding onto this story, Steve Wyche of NFL.com reports in a Twitter video, that the 23 year-old signal caller will not go on the exempt list because no charges have filed as of yet.

However, it might not be long until the quarterback faces suspension from the league, according to Roy Cummings of Florida Football Insiders. Cummings says that while Winston may avoid suspension for the rest of the year because the investigation could take some time, but notes that sexual assault allegations have resulted in missed time in the past. The writer points to when Ben Roethlisberger was suspended for four games back when he faced similar charges in 2010.

The story is still unfolding, so while Winston’s playing outlook is in flux given his current injury, this situation adds an unexpected twist to his 2017 season and perhaps even in 2018.