Previously given an original-round tender, Troy Hill agreed to a Rams extension. The Rams and the veteran cornerback agreed to terms on a two-year deal with a base value of $5.25MM, Mike Garafolo of NFL.com tweets. 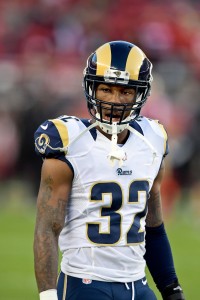 This deal could be worth as much as $8.25MM, with the additional $3MM available through playing-time incentives. Should Hill play in 52.5% of the Rams’ defensive snaps, he will collect this additional $3MM, Garafolo adds.

Hill had not signed his RFA tender, worth just more than $2MM, but is now under Rams control through 2020. A former UDFA, Hill started seven games for the Rams last season. Aqib Talib‘s injury opened the door for extended Hill playing time.

The 27-year-old defender played 450 snaps last season, intercepted two passes and graded out as Pro Football Focus’ No. 66 corner (among the 112 that qualified for full-time status). The Oregon product produced a higher grade in 2017. He has started 14 games during his three-year Los Angeles tenure.

While Talib, Marcus Peters and Nickell Robey-Coleman still comprise the Rams’ top cornerback trio, both Talib and Peters are in the final years of their respective contracts. Robey-Coleman is signed through 2020.

The NFL has suspended Rams cornerback Troy Hill two games for a violation of its substance abuse policy, reports ESPN’s Adam Schefter (on Twitter). The ban stems from Hill’s arrest on a DUI charge in November.

Although Hill graded as one of Pro Football Focus’ 10 worst corners last year, his second season in the league, the former Bengal saw action in the majority of the Rams’ games (12) and made four starts. The 25-year-old may have played a full season had he avoided off-field trouble, but the Rams cut him shortly after his arrest. The club re-signed Hill to its practice squad the next day, though, and added him back to its active roster in mid-December.

If Hill remains with Los Angeles through the summer, he’ll be eligible to participate in training camp and the team’s preseason games. His reinstatement would come prior to the Rams’ Week 3 trek to San Francisco.