Tyrell Williams is no longer with the Lions. After placing the veteran wide receiver on IR in September, the Lions waived him via injury settlement. 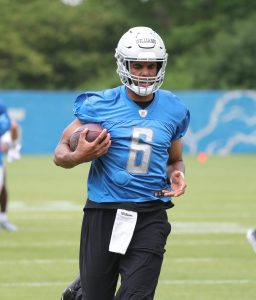 Injuries have thrown Williams’ career off course. This most recent health setback limited Williams to one game with the Lions, who had signed him to a one-year, $4MM deal just before free agency. Williams, 29, will be eligible to to play for another team going forward this season, but he has not been a particularly reliable player since 2019.

Reuniting with former Chargers HC Anthony Lynn, Williams was on track to be the Lions’ No. 1 receiver during their rebuilding season. But a concussion sustained in Week 1 sidelined him. The Lions had signed both Williams and Breshad Perriman to effectively serve as placeholders this season, but both are now off the roster.

This marks the second time this year a team has cut Williams. The Raiders jettisoned the former UDFA in February, with that move coming after he missed the entire 2020 season because of a shoulder injury. Back in 2016, with Keenan Allen missing most of that season, Williams eclipsed 1,000 yards in his first Chargers full season. He became a role player going forward with the Bolts, and the Raiders used him in a similar capacity in 2019. In 14 games with Oakland that year, Williams caught 42 passes for 651 yards and six touchdowns.

The Lions have placed wide receiver Tyrell Williams on the injured reserve list, per a club announcement. His roster spot will be filled by linebacker Josh Woods, who has been signed from the Bears’ practice squad.

Williams reunited with Anthony Lynn this year, agreeing to a one-year deal that could be worth as much as $6.2MM. The Lions were hoping to have a healthy Williams front and center in their offense with Kenny Golladay and Marvin Jones out of the picture. Instead, the 29-year-old will have to spend the early part of the season focusing on his health. In his lone Lions game, Williams notched two grabs for 14 yards.

His most productive season to date came under Mike McCoy — a 1,000-yard 2016 slate — but he remained an auxiliary Chargers cog under Lynn from 2017-18. Still, Williams totaled more than 1,300 yards and nine touchdowns between those seasons.

Tyrell Williams will link up with Anthony Lynn in Detroit. The former Chargers and Raiders wide receiver agreed to terms with the Lions on a one-year deal Wednesday, Adam Schefter of ESPN.com tweets.

The recent Raiders cap casualty can earn up to $6.2MM on his new deal with the Lions. Williams played under Lynn for two seasons in Los Angeles. Lynn is now Detroit’s offensive coordinator.

This move stands to help the rebuilding Lions at a key need area. Kenny Golladay and Marvin Jones are free agents. So is Danny Amendola. While Golladay has surfaced as a franchise tag candidate, Jones is expected to depart to join a playoff contender. Despite missing all last season due to injury, Williams did not linger in free agency long.

The Raiders gave Williams a four-year, $44MM deal in 2019, but only $10MM of that pact was guaranteed. Still, the Raiders guaranteed Williams’ 2020 salary last year but saw that move go bust when the veteran suffered a shoulder injury over the summer. Williams, 29, only recently returned to full health.

Williams’ most productive season came under Mike McCoy — a 1,000-yard 2016 slate — but he remained an auxiliary Chargers cog under Lynn from 2017-18. Williams totaled more than 1,300 yards and nine touchdowns between those seasons and figures to be able to quickly assimilate into Lynn’s Jared Goff-piloted offense.

Tyrell Williams spent the 2020 season on the Raiders’ IR list. The parties will part ways ahead of the 2021 slate. The Raiders plan to release the veteran wide receiver at the start of the 2021 league year in March, Tom Pelissero of NFL.com reports (on Twitter).

With a Williams release saving the Raiders more than $10MM in cap space, this has long been the expected course of action for a team that further revamped its wide receiver group last year. This move will create $11.6MM in additional funds for the Raiders, who had already paid out Williams’ guarantees.

The Raiders signed Williams in 2019. While that deal only contained a season’s worth of guarantees, the Raiders kept Williams around last year. But a torn shoulder labrum ended his season before it started.

Williams’ Raiders fit was off from the start. The team planned on having the ex-Charger as its No. 2 wideout in 2019, having traded for Antonio Brown. When the latter proved to be a monumental distraction ahead of his release, Williams was asked to be a go-to target. In 2020, Las Vegas drafted Henry Ruggs and Bryan Edwards — both of whom figure to feature heavily in the Silver and Black’s 2021 passing attack. Nelson Agholor, a fellow 2020 arrival, is a free agent.

Williams caught 42 passes for 651 yards and six touchdowns in 2019 — numbers nearly identical to his 2018 Bolts work — and has a 1,000-yard season (2016) on his resume. The former UDFA is on the verge of returning to full strength, with Pelissero noting that is expected within the next month, and is still south of 30. Williams will turn 29 on Friday.

That said, the longtime AFC West contributor will enter what could well be a buyer’s receiver market. Numerous starters are on track for free agency, and Williams will head to the market after missing a full season. With the cap expected to drop by nearly $20MM, this is a bad combination for the six-year veteran. Former Chargers assistants have dispersed throughout the league, however, and Williams would represent a buy-low option for the likes of Frank Reich (Indianapolis), Nick Sirianni and Shane Steichen (Philadelphia) or Anthony Lynn (Detroit). All three teams are in need at wide receiver.

Tyrell Williams‘ second Raiders season will end before it starts. The team is placing the veteran wide receiver on IR, Field Yates of ESPN.com tweets.

This comes a bit after news of Williams sustaining another torn shoulder labrum. Williams was planning to attempt to play through such an injury, as he did in college and with the Chargers on prior occasions, but this IR development may well indicate he will undergo surgery. That will indeed be Williams’ course of action, according to Ian Rapoport of NFL.com (on Twitter).

Because the Raiders are not carrying Williams onto their regular-season roster, he will not be eligible to return from IR. That would not matter anyway. This surgery is expected to sideline Williams for around six months. Considering the team’s actions at receiver this offseason, it is certainly possible Williams will be elsewhere in 2021.

The Raiders opted to guarantee Williams’ $11MM base salary this season, but the team proceeded to draft Henry Ruggs in Round 1 and Bryan Edwards in Round 3. The latter has worked as a starter in camp, impressing the team ahead of his rookie season. With a Williams 2021 release set to provide $11.6MM in cap room, it is likely the team will opt for such savings in what could well be the biggest salary cap reduction in NFL history.

Last year, the Raiders brought in Williams to play as the No. 2 wideout alongside Antonio Brown. With Brown’s antics driving him out of Oakland before playing a game, more became expected of Williams. However, he recorded only 42 catches for 651 yards while battling injuries to both feet. With the rookies joining Darren Waller and Hunter Renfrow in Las Vegas’ passing attack this year, Williams’ role may have been reduced. Instead, he will rehab ahead of his age-29 season in 2021.

Tyrell Williams dealt with injuries to both of his feet last season, missing time because of it. The maladies took a while to recover from this offseason, but the veteran Raiders wideout believes he has nearly surmounted the nagging problems.

“Shoot, it’s been a long offseason with my feet,” Williams said, via Vic Tafur of The Athletic (subscription required). “I did two months after the season of just rehab and resting them. It was still taking a long time and I started getting pretty discouraged, but … um, about two months ago, I finally got over the hump and my feet have been feeling good. I still feel it a little bit, but compared to what I had … it’s nothing compared to what I was going through during the season.”

Williams missed two games with plantar fasciitis in his right foot but said his left foot became a discomfort source after he returned. The second-year Raider then dealt with pain in both feet the rest of the way. Williams still averaged 15.5 yards per catch, but the Raiders drafted two wideouts and a gadget player (Lynn Bowden Jr.) in the first three rounds. The Raiders guaranteed Williams’ $11MM base salary earlier this year, but the ex-Charger has no guaranteed money on his deal beyond 2020.

Here is more injury news from the Raiders’ receiving corps and the latest from the rest of the Wests:

Today, Tyrell Williams‘ $11MM base salary for the 2020 season became fully guaranteed, as Joel Corry of CBSSports.com (on Twitter) notes. Before Wednesday, the wide receiver’s salary was guaranteed for injury only, meaning that the Raiders could have cut him without any fiscal penalty.

After an injury-riddled season, Williams was not a slam dunk to return to the Raiders in 2020. Playing through plantar fasciitis in both feet, Williams didn’t have the sort of breakthrough campaign the Raiders were expecting when they handed him a four-year, $44 million deal last year.

Williams’ 42 grabs for 651 yards and six touchdowns were roughly in line with his previous work, but it wasn’t the sort of production that you’d want out of an $11MM/year player. He did provide glimpses of potential, however. Williams kicked off the year with six catches for 105 yards against the Broncos and later torched the Texans for a seemingly easy 46-yard touchdown – an emphatic statement following a multi-game absence.

The Raiders’ infatuation with Jets receiver and soon-to-be free agent Robby Anderson is well-known, but Williams’ presence could slow their pursuit. Instead, the Raiders could use one of their two first-round picks on a rookie WR, and they’ll have a bevy of top-end talents from which to choose. Jerry Jeudy, CeeDee Lamb, Henry Ruggs III, and Tee Higgins are among the players that headline this year’s crop of receivers and depending on how the early picks shake out, they could all be on the table at No. 12. Even if there’s an unexpected run on receivers early, at least one of those players should be available at No. 19.

For now, Williams and Hunter Renfrow are slotted in as the Raiders’ top targets.