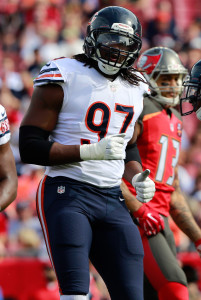 Young, 33 in September, was a key cog in Chicago’s defense since joining the team in 2014. He has made 50 appearances for the Bears and he was an absolute sack machine for the most part with 26 over that span.

Unfortunately, Young suffered a torn triceps muscle in October which landed him on IR. Between the injury and the $4.5MM that could be saved by cutting him, it wasn’t a tough decision for Pace. The Bears will give themselves additional flexibility heading into free agency with just $900K in dead money left on the cap.

If Young chooses to continue playing, he should find healthy interest from teams in need of a 3-4 edge rusher. This past season was a trying one, but he has bounced back from injury before. Young tore one of his Achilles’ tendons late in the 2014 season and bounced back to play a complete and successful campaign in 2015. In that 2015 season, Young had 6.5 sacks and 30 tackles.

The Bears have officially placed outside linebacker Willie Young on injured reserve. This was the expected move after Young suffered a torn triceps muscle.

Young, 32, has been a key cog of the Bears’ defense since joining the team in 2014. He has made 50 appearances for Chicago and has been an absolute sack machine with 26 in total.

Without him, the Bears will be extra reliant on Pernell McPhee, Leonard Floyd, and Sam Acho for edge pressure. They may also look to the free agent market for reinforcements. Although he is strictly a situational pass rusher at this point, someone like Dwight Freeney could be of interest to Chicago.

Young inked a lucrative extension with the Bears last year and is under contract with the team through the 2018 season. His recovery will not be fun, but he has been here before. Young tore one of his Achilles’ tendons late in the 2014 season and bounced back to play a complete and successful campaign in 2015. In that 2015 season, Young had 6.5 sacks and 30 tackles.

Already down several key players due to injury, the Bears look to have lost another. A torn triceps injury will shelve outside linebacker Willie Young for the season’s remainder, Dan Wiederer of the Chicago Tribune reports. The Bears have yet to announce this, currently slotting Young as doubtful for their Monday-night game against the Vikings. 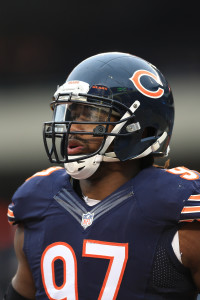 This setback will require surgery, per Wiederer, and strip the Bears of another starter. They’re already down defenders Jerrell Freeman and Quintin Demps — each residing on IR — while wideouts Kevin White and Cameron Meredith were previously lost to severe injuries.

Young is in his fourth season with the Bears. The team extended him last year, with the $13.55MM pact running through next season. This will reduce the Bears’ outside linebacker rotation to Pernell McPhee — who’s also experienced extensive injury troubles since coming to Chicago — Leonard Floyd and Sam Acho. Wiederer adds the Bears will consider promoting Isaiah Irving off the practice squad; the team signed Howard Jones earlier this week.

The 32-year-old Young has two sacks and seven tackles this season. He now has 26 sacks since coming to the Windy City in 2014. Most of Young’s guaranteed money came during this season, so the Bears may have a decision to make after the season. However, Young has a history of overcoming severe maladies. He bounced back from an Achilles’ tendon tear in December 2014, played in 16 games in 2015 and earned the Chicago extension on which he’s currently playing.

Bears linebacker Willie Young will be staying in Chicago for the foreseeable future. According to ESPN’s Adam Caplan (via Twitter), the Bears have signed the 30-year-old to a two-year extension, which would take him through the 2018 season. The terms of the deal have yet to be reported.

Young originally joined the organization back in 2014, inking a three-year, $9MM deal. Through his first two years in Chicago, the former NC State-standout has certainly lived up to his contract. After having switched from defensive end to linebacker, Young has averaged 35 tackles and more than eight sacks a season since joining the organization. After having ruptured his achilles tendon in 2014, Young bounced back with 6.5 sacks last season. The defender was originally a seventh-round pick by the Lions in 2011, and Young ultimately spent three years in Detroit.

As RosterResource.com shows, the Bears added a number of linebackers this offseason, including first-round pick Leonard Floyd and veterans Danny Trevathan and Jerrell Freeman. As a result, Young figures to compete with Lamarr Houston for back-up linebacker snaps.

MONDAY: 9:30am: Talks are ongoing, but nothing is imminent between the two sides, Cole tweets.

THURSDAY, 2:18pm: The chances of linebacker/defensive end Willie Young taking the Bears’ current two-year offer is “50/50,” a source tells Jason Cole of Bleacher Report (via Twitter). The offer is just good enough that Young has to consider, he adds.

It’s not clear if Chicago has presented Young with its final offer, though the tone of Cole’s tweet seems to suggest that. Young, 30, would be under contract through his age-33 season with a two-year extension.

Young inked a three-year, $9MM deal with Chicago in 2014 and, so far, he has been a solid value. Last year, Pro Football Focus (subscription required) rated Young as the 24th best edge defender in the NFL out of 110 qualified players. The advanced metrics gave him roughly equally good marks for his pass rush (359 pass snaps) and run defense (173 snaps). Young has started in eight games during each of the past two seasons and has enhanced his pass-rushing profile considerably during that span. After six sacks in four years with the Lions, Young has registered 16.5 in 30 games with the Bears.

The veteran was reportedly on the trade block after being used sparingly during the first half of the 2015 season. However, Young turned it on in the second half, making 5.5 of his 6.5 sacks from Weeks 9-13. Now, even though Chicago has a strong cast of outside linebackers, the team badly wants to keep him in the fold.

Entering the final season of a three-year contract, Willie Young may not be headed toward the free agent market after this season.

The Bears and Young are in talks on a two-year extension that would keep the edge defender in Chicago until his age-33 season, Jason Cole of Bleacher report tweets. Cole reports the deal could be finalized soon.

Despite the Bears having signed Pernell McPhee in 2015 and added Leonard Floyd in the first round last month, the team looks to prefer to keep Young in the fold. He’s been a quality performer who’s done well to deliver on the three-year, $9MM deal he signed in 2014.

The 30-year-old Young has started in eight games during each of the past two seasons and has enhanced his pass-rushing profile considerably during that span. After six sacks in four years with the Lions, Young has registered 16.5 in 30 games with the Bears.

Transitioning from 4-3 end to 3-4 outside linebacker last season, Young was thought to be on the trade block to begin 2015 after being used sparingly during the first half of the campaign. But Young turned it on for the Bears in the second half, making 5.5 of his 6.5 sacks from Weeks 9-13 and looks to have changed the franchise’s tune despite its now-well-equipped cast of outside ‘backers. A former seventh-round pick of the Lions’ in 2010, Young rated as one of Pro Football Focus’ more balanced edge players last season, ranking 24th overall and grading well against the pass and the run.

Although Floyd has yet to sign his rookie deal, he, McPhee and Lamarr Houston are expected to take up $17.22MM of Chicago’s cap this season. Young is only set to occupy $3.17MM of the Bears’ cap this season. That rate is plenty reasonable for the production Young’s provided, and more Chicago-commissioned checks could be coming his way.

The Bears’ excellent cap situation (nearly $24MM in space) and the importance of having quality edge rushers are two reasons the team won’t release either Lamarr Houston or Willie Young, as Adam Jahns of the Chicago Sun-Times writes.

On Houston, who had a career-high eight sacks in 2015, general manager Ryan Pace said, ‘‘He came on strong. Luckily, we’re in a healthy cap situation, so we can [keep him on the roster].”

Houston’s $6.99MM cap hold is the Bears’ fourth-highest total for 2016, while the $3.17MM hit for Young (6.5 sacks last season) is more modest. One anonymous AFC executive opined last month that Houston was a candidate for the chopping block, but it now appears he’s safe.

Regarding Houston and Young, who combined for 12.5 sacks over the final nine games last season, head coach John Fox stated, “Obviously, I like those guys.”

The fact that Houston and Young seem to have the approval of Bears brass doesn’t mean the club will eschew pursuing more pass rushers via the draft, per Jahns. On the contrary, they’d like to add speed off the edge. Speed isn’t the strongest suit of Houston, Young or Pernell McPhee, Jahns notes.

In other NFC news…

Browns wideout Josh Gordon will be eligible to apply for reinstatement from his suspension in February, and if Gordon gets the go-ahead from the NFL to return to action, head coach Mike Pettine would welcome him back with open arms, tweets Mary Kay Cabot of Cleveland.com. “Absolutely we would,” Pettine said. “He’s a Cleveland Brown.”

Of course, given the way the Browns have played this season, it’s fair to be skeptical that Pettine will even be around to make that decision in February — it’s possible Cleveland will have hired a new head coach by then.

As we wait to see what the future holds for Pettine and Gordon, let’s check in on a few more items from around the NFL’s North divisions….