It appears another Bengals path toward a potential defensive coordinator hire will close. The Saints are planning to block them from interviewing Aaron Glenn, Ian Rapoport of NFL.com tweets.

The Bengals requested a meeting with the Saints’ secondary coach earlier on Thursday. This represents the latest in what’s been a series of barriers impeding a Bengals DC hire.

This is the second Saints coach the Bengals have tried to meet with regarding their DC position. The team sought a meeting with Saints DC Dennis Allen, whose previous contract had expired after the 2018 season, but Allen and the Saints agreed on a new contract.

Cincinnati has been connected to other veterans like Dom Capers, Jack Del Rio, Mike Nolan and John Fox. The team moved forward with Capers and Del Rio. Capers turned the Bengals down, and nothing came to fruition with Del Rio. Florida defensive coordinator Todd Grantham then looked like the pick, but the Gators are keeping him. The Bengals requested meetings with former Falcons DC Marquand Manuel and Texas A&M defensive boss Mike Elko.

The Rams have granted the Bengals permission to meet with cornerbacks coach Aubrey Pleasant, however. Mere permission on this front, which would make Pleasant a first-time coordinator, could be critical given the way this process has unfolded.

A 15-year NFL veteran as a corner, Glenn has been a coach for five seasons — the past three as Saints DC. As long as he is under contract, the Saints can block him from an interview to become a coordinator.

Aaron Glenn is in the running for the Bengals’ defensive coordinator job. On Thursday, the Bengals requested an interview with the Saints secondary coach, according to Josina Anderson of ESPN.com (Twitter link).

Glenn caught the Bengals’ eye earlier this month after deals with Jack Del Rio and Dom Capers went south. Glenn lacks the previous DC experience of Del Rio and Capers, but he is a highly respected coach with recent playing experience.

Glenn played for the Jets, Texans, Cowboys, Jaguars, and Saints over the course of his 15-year career, which ended in 2008. In 2012, he hooked on with the Jets as a personnel scout and later joined the Browns as their assistant DB coach. The Saints brought him on board as the top DB coach in 2016 and he may now have a chance to vault up the coaching ladder.

The Saints’ secondary has lacked talent in recent years, but Glenn has been lauded for developing the younger players in his group.

The Bengals’ latest would-be DC hire, Todd Grantham, opted to stay with the University of Florida rather than join Cincinnati.

The Bengals are casting a wide net in their search for a defensive coordinator and other defensive staffers, as Tom Pelissero of NFL.com tweets. The club is expected to request (or has requested) interviews with former Falcons defensive coordinator Marquand Manuel, Texas A&M DC Mike Elko, Florida DC Todd Grantham, and Saints defensive backs coach Aaron Glenn.

The Bengals made an offer to veteran coach Dom Capers this week, but he turned them down and is now believed to be Miami-bound. Capers, 68, would have given the Bengals a Rams replica of sorts as he would have supported 33-year-old head coach Zac Taylor. The Bengals also flirted with former Raiders head coach Jack Del Rio, an indication they would prefer a veteran counterweight to Taylor.

Outside of Grantham, however, the coaches they’re now considering are on the younger side of 50. That could indicate a change in philosophy for Cincinnati. Or, it could be a case of the old adage – beggars can’t be choosers.

Now that it seems certain the Patriots are going to lose Matt Patricia to the Lions, names are emerging for the Pats’ soon-to-be available defensive coordinator position. 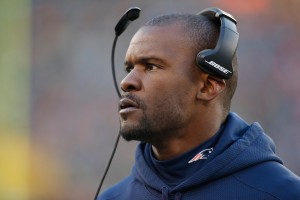 Brian Flores is the favorite for this role, Ian Rapoport of NFL.com notes (on Twitter). This would be a natural progression for the 36-year-old Flores, who has coached the safeties and linebackers under Patricia since 2012. But an outside candidate looms as well.

The Patriots are also expected to consider Saints secondary coach Aaron Glenn, Rapoport reports. Glenn played for Bill Belichick early in his career when he was a Pro Bowler with the Jets.

Glenn’s worked as the Saints’ secondary boss for the past two seasons. Prior to that, the 45-year-old Glenn was an assistant defensive backs coach with the Browns for two years. Glenn played with the Jets for eight seasons, and three of those (1997-99), came when Belichick ran Bill Parcells‘ defense. A three-time Pro Bowler, Glenn earned two of those distinctions under Belichick in ’97 and ’98.

Flores remains in contention for the Cardinals’ HC position. He’s expected to receive a second interview with Arizona brass. It would seem if the Cardinals go in another direction for their top coaching job that Flores will be promoted in New England. If Flores lands the Cards’ job, then the Pats’ search becomes more interesting. 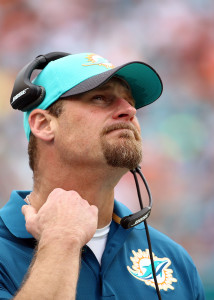 The Dolphins selected four players in the first three rounds of the 2013 NFL Draft. The rookies had underwhelming seasons to say the least, and the Sun Sentinel’s Chris Perkins takes a look at the group. Third-overall pick Dion Jordan contributed mostly as a third-down pass rusher in a season riddled by injuries. Cornerback Jamar Taylor and guard Dallas Thomas also suffered through injures while cornerback Will Davis struggled to crack the defensive back rotation.

In spite of the player’s issues, the sophomores are confident they will rebound.

“I feel like it was a learning experience for all of us,” said Taylor. “We all came here on our high horse and we got humbled real quick… There’s no doubt in my mind the Dolphins drafted the right players last year.

“I’ve got high expectations on myself. I can’t really worry about what everybody else thinks. As long as I get the respect of my teammates and the coaches and myself, and just prove myself right, that I know I can do it, that’s all I worry about.”

Thomas is now the team’s starting left guard, but as Perkins points out, none of the other players are starters. It will be difficult for Jordan, Taylor and Davis to dethrone the veterans ahead of them on the depth chart.

Let’s see what else is going on around the NFL…