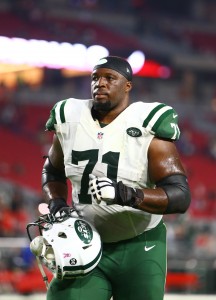 The Jets have signed tackle Ben Ijalana to a one-year deal, according to Ian Rapoport of NFL.com (on Twitter). The news is a bit unexpected since the Jets declined his option for 2018 back in February.

Had the Jets retained Ijalana under the terms of his old deal, they would have had to pay out a $500K bonus in order to trigger a $4.5MM base salary for 2018. He’s back now, under a cheaper deal.

Ijalana appeared in 11 games in 2017 but only played 56 offensive snaps after losing out on a starting job to Brandon Shell. However, in the previous season, he started 13 games and played 83% percent of the team’s snaps.

Ijalan offers experience at both left tackle and right tackle and projects to come off of the bench in support of Kelvin Beachum and Shell. For a complete look at the Jets’ depth chart, check out their page on Roster Resource.

The Jets had until today to exercise their $500,000 bonus on the offensive lineman that would’ve triggered a $4.5 MM base salary for the veteran tackle. By not picking up the option, the Jets will save roughly $4.672MM in cap space but incur $1.25MM in dead money. Cimini reports the team could bring him back as a free agent.

A versatile lineman who can play both tackle spots, Ijalana is sure to command attention for a team looking to add depth to its offensive line in 2018.

The Jets are unlikely to exercise offensive tackle Ben Ijalana‘s option for the 2018 season, according to Ian Rapoport of NFL.com (Twitter link). Even so, New York could potentially re-sign Ijalana during free agency, per Rapoport.

Due to the structure of Ijalana’s two-year contract, the Jets must decide by today whether to pay a $500K bonus that would trigger the 2018 season of his deal. By not picking up the option, New York will save roughly $4.672MM in cap space but incur $1.25MM in dead money.

Ijalana, 28, started 13 games and played more than 83% of Gang Green’s offensive snaps in 2016, and even spent time at left tackle when called upon. While he wasn’t spectacular — Pro Football Focus graded him as the No. 60 tackle among 78 qualifiers — Ijalana provided depth and looked to be the frontrunner for the Jets’ starting right tackle position in 2017.

Instead, Brandon Shell took over at right tackle, relegating Ijalana to swing tackle duty. In all, Ijalana played only 56 offensive snaps and 42 special teams a season ago, making his $4.5MM salary for 2018 untenable. He’ll hit free agency, and given the dearth of tackles available on the open market, it’s not out of the question that Ijalana could compete for a starting job elsewhere.

John Bowlen, the younger brother of Broncos majority owner Pat Bowlen, is aiming to sell his minority stake (30-35%) in the club, sources tell Nicki Jhabvala of the Denver Post. John Bowlen’s decision to sell wouldn’t necessarily affect the day-to-day operations of the Broncos, as Pat Bowlen — who stepped down as principal owner in 2014 due to Alzheimer’s disease — would still hold the majority of the team and be entitled to designate one of his children as his successor. But John Bowlen reportedly believes the Bronocs are “not being run the way Pat would have run it in many, many capacities” and wants a new owner in charge, per Jhabvala.

Here’s more from the AFC as Week 4 draws to a close:

The Jets will stage a competition at quarterback in 2017, and Josh McCown, Bryce Petty, and Christian Hackenberg will all be given a chance to win the job, head coach Todd Bowles told reporters, including Brian Costello of the New York Post (Twitter link). McCown signed a one-year deal that comes with $6MM guaranteed and $7MM available via incentives, so the 37-year-old has to be considered the favorite in any sort of battle. But Hackenberg, specifically, could be handed a shot to play in 2017 after being selected in the second round of last year’s draft.

Here’s more out of New York:

The Jets are retaining OL Ben Ijalana, a source tells Mike Garafolo of NFL.com (on Twitter). It will be a two-year, $11MM deal.

Ijalana offers versatility on the offensive line and he stepped up to play left tackle when called upon in 2016. He’s not exactly a world-beater, however. Ijalana got a 47.6 overall score from Pro Football Focus, ranking him as the No. 60 tackle in the NFL last year out of 78 qualified players.