Budda Baker is now the highest-paid safety in NFL history. On Tuesday, the Cardinals agreed to a four-year, $59MM extension with their young standout defender (Twitter link via Ian Rapoport of NFL.com). 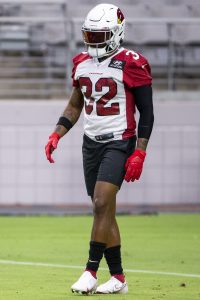 Baker’s deal includes a whopping $33.1MM guaranteed and comes out to an annual average of $14.75MM. Before the re-up, Baker was set to earn just $1.396MM in base pay in the walk year of his rookie deal. With that, Baker tops the previous watermark set by Bears safety Eddie Jackson, who signed a four-year, $58.4MM extension with the Bears earlier this year.

The 24-year-old has impressed across three pro seasons, though he has never intercepted a pass as a pro. He has, however, notched 323 tackles, 3.5 sacks, four forced fumbles, and 14 passes defensed in total. Last year, he registered 104 solo stops to lead the league. Baker appeared as a slot corner earlier in his career, but he’s clearly found a home as a safety.

With Baker, edge rusher Chandler Jones, cornerback Patrick Peterson, and versatile rookie linebacker Isaiah Simmons, the Cardinals boast one of the league’s most intriguing defenses. They’ll look to put it all together in 2020 and improve on their 5-10-1 mark from last year.

Baker’s deal has surely captured the attention of new Seahawks safety Jamal Adams. Adams has spent years lobbying for a market-setting contract and he’ll surely leapfrog Baker in 2021. For now, Adams has agreed to table the talks.

The Seahawks started talking contract with star defensive end and free agent-to-be Frank Clark last month, and Bob Condotta of the Seattle Times says the Seahawks will not let Clark get away. If the two sides cannot work out a long-term deal in the next couple of weeks, Seattle will put the franchise tag — valued at roughly $18MM for defensive ends — on the 25-year-old. That will at least buy them until July to come to terms on a multiyear pact, which could have a total value of up to $90MM. Clark, though, appears perfectly willing to play out the 2019 campaign on the one-year franchise tender, which would make him eligible for free agency again next year.

Let’s round up a few more items from the NFC:

The Bears will trade back from the 36th overall pick, reports Ian Rapoport of NFL.com (Twitter link). The selection will go to Arizona in exchange for the Cardinals’ second-, fourth- and sixth-round picks this year and a fourth in 2018, tweets ESPN’s Adam Schefter. Adam Jahns of the Chicago Sun-Times has the exact details: Chicago will get the 45th, 119th and 197th selections this year, while the Cards will receive Nos. 36 and 221.

The Cards have selected Washington safety Budda Baker, who could help replace the departed Tony Jefferson. After Jefferson signed with the Ravens, the Cardinals added Antoine Bethea, who’s currently penciled in alongside star Tyrann Mathieu as a back-end starter.

Despite all the trade rumors that surrounded Redskins quarterback Kirk Cousins earlier this offseason, the veteran signal-caller expects to spend the 2017 campaign in Washington. “I haven’t heard anything,” Cousins said today on ESPN’s NFL Live (link via John Keim of ESPN.com). “I’m not expecting anything to happen. And I’m looking forward to getting back to work with my teammates.” The Redskins are reportedly offering Cousins a five-year deal worth $20MM annually, but if a deal isn’t struck, Cousins will play out the season on his second consecutive franchise tag (at a cost of nearly $24MM). Cousins has already signed the tender, fully guaranteeing himself that salary for 2017.

Stanford running back Christian McCaffrey visited the Panthers last week, a source tells Jourdan Rodrigue of the Charlotte Observer. NFL executives reportedly believe McCaffrey will be a top-10 selection, and Carolina picks at No. 8. Panthers head coach Ron Rivera recently said no spot is “too high” to draft a running back, and veteran Jonathan Stewart‘s recent one-year extension won’t stop Carolina from bringing in another runner. PFR’s first mock draft has McCaffrey falling a bit farther, however, as we sent him to Philadelphia at No. 14.

Here’s more on the NFL draft: