Patriots’ Damien Harris Out For Week 15

The Patriots will be without one of their main offensive pieces for Sunday’s showdown with the Colts. Starting running back Damien Harris has been ruled out for the game (Twitter link via ESPN’s Field Yates). 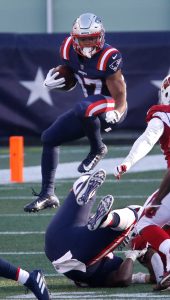 Harris had been limited in practice throughout the week, and was listed as questionable after Thursday due to a hamstring injury. This will mark the second game (the other being in Week 10) that the 24-year-old has missed this season.

The 2019 third-round pick has been enjoying the best campaign of his young career, posting 754 yards and nine touchdowns on 164 carries. He has also added 13 catches for 84 receiving yards. Without him, look for the Patriots to rely on Rhamondre Stevenson and Brandon Bolden as their top two backs against the Colts. Stevenson, a fourth-round rookie, topped 100 rushing yards during his first start of the season.

With a win Saturday night, New England can match the Chiefs’ 10-4 record, and in doing so reclaim top spot in the AFC.

The Patriots offense will get some reinforcement for tomorrow’s game against the Falcons. Running back Damien Harris returned to practice today, an indication he’s cleared concussion protocol and should be good to go for TNF.

The former third-round pick has been having a career season in 2021, collecting 610 yards from scrimmage and seven touchdowns. Before suffering a concussion in Week 9, Harris had collected at least 80 rushing yards in three straight games. The 24-year-old should find himself back atop the depth chart on Thursday evening.

With Harris out of the lineup, rookie Rhamondre Stevenson ran wild last weekend, collecting 114 total yards and two touchdowns. The Patriots are also rostering running backs Brandon Bolden and J.J. Taylor, while veteran pass-catcher James White is out for the season.

Gunner Olszewski also overcame concussion protocol and should play tomorrow against the Falcons. The 24-year-old was forced to miss Sunday’s win over the Browns, but he otherwise appeared in all nine previous games in 2021. Olszewski has mostly appeared on special teams, having returned 10 kicks for 242 yards and 18 punts for 248 yards.

Patriots’ Damien Harris Out For Week 10

The Patriots will be without their starting running back against the Browns, and they may be down multiple backs. New England ruled out Damien Harris for Week 10.

Harris is in the Patriots’ concussion protocol after leaving last week’s game. He did not practice this week. While entering the weekend with a questionable designation, Harris will be shelved for at least a game because of his head injury.

This will mean both the run-oriented Patriots and Browns squads will be without their starting backs Sunday. The Pats also have listed Rhamondre Stevenson as questionable due to his status in the protocol. The rookie also sustained a concussion against the Panthers and did not practice this week, but the Pats remain hopeful he can play in the key AFC matchup.

Sunday’s game will nevertheless feature depleted backfields. The Browns have seen COVID-19 reduce theirs essentially to ex-Alliance of American Football performer D’Ernest Johnson, Cleveland’s only active-roster back that did not test positive for COVID-19 this week. Chubb, Demetric Felton and John Kelly did test positive and are out this week. Kareem Hunt remains without a firm return timetable from his calf injury, but the standout backup might be down until December.

As for the Patriots, they have the likes of Brandon Bolden and J.J. Taylor healthy. Harris, however, has gained 547 rushing yards — 400-plus more than the Pats’ second-leading rusher — and scored seven touchdowns in a breakthrough season.

Per usual, the Patriots running back room is getting a bit crowded. However, while Bill Belichick and co. will traditionally shake up their depth chart based on performance and opponents, ESPN’s Mike Reiss believes the hierarchy is already set heading into training camp. According to the writer, Damien Harris is the “surefire No. 1 option” at the moment

Harris, a 2019 third-round pick, barely played during his rookie campaign, but he took on more responsibility during the 2020 season. The Alabama product ended up finishing the campaign with 743 yards from scrimmage on only 142 carries. Best of all, the 5-foot-11 running back doesn’t appear to be a flash in the pan, as Belichick was quick to praise the 24-year-old last month.

“Damien works extremely hard at all phases — certainly his conditioning and training, running game, passing game, protection, route running, catching the ball,” Belichick said (via Reiss) “He’s got a lot of skill and he can contribute in a variety of ways, and he’s looking to upgrade where he is in every area.”

While Harris seems to have a firm hold on the starting gig, the rest of the depth chart is still a bit uncertain. As Reiss notes, the only other running back who’s (basically) guaranteed to make the roster is fourth-round rookie Rhamondre Stevenson. Elsewhere, pass-catching veteran James White will probably retain his role for at least another year, J.J. Taylor is inexpensive and should serve as a “spark plug,” and Brandon Bolden has established himself as a special teams ace. This means that former first-round pick Sony Michel could find himself on the outside looking in, especially if the Patriots decide to hang on to one of their younger, less expensive alternatives.

Adam Gase insisted the Jets were not trading Quinnen Williams, but that did not stop teams from reaching out about a potential trade. The Jets received inquiries from multiple teams on their standout defensive tackle before last week’s trade deadline, per Adam Schefter of ESPN.com. Although GM Joe Douglas was not with the team when the Jets selected Williams — during a draft in which Gase was not exactly in lock-step with previous GM Mike Maccagnan — the team views the ex-Alabama prospect’s talent and positional value to be too great to trade. After a less impactful rookie year, Williams has broken through as an NFL sophomore. He has three sacks and seven tackles for loss — already bettering his 2019 numbers.

The Patriots are doing some major shuffling with their backfield. New England is placing running back Sony Michel on injured reserve and activating fellow running back Damien Harris off IR, according to Ian Rapoport of NFL Network (Twitter link). The team also activated receiver Gunner Olszewski and placed safety Cody Davis on injured reserve.

With the new rules this year, Michel will have to miss at least three games before returning. It’s a bummer for Michel since he was coming off by far his best game of the season, when he rushed for 117 yards on only nine carries against the Raiders. He had been a disappointment through the first couple of weeks, and will now be hitting the shelf. Fortunately, Rapoport noted in a follow-up tweet that he was told Michel could be activated relatively quickly and it’s not a season-ending injury.

A third-round pick last year, Harris barely played as a rookie and was a healthy scratch most weeks. He reportedly had a strong summer though, and was looking like he might be the Patriots’ starter to open the year before a hand injury sent him to IR. Now he’s back and figures to be in the mix tonight against Kansas City, although with James White and Rex Burkhead also present it’s unclear how much run he’ll get.

That being said, with Michel hitting injured reserve there’s a clear lane for Harris to shine if he can make the most of the opportunity. With Cam Newton out due to COVID-19 and Brian Hoyer getting the start at quarterback, the Pats figure to be running the ball frequently on Monday night. A first-round pick in 2018, Michel impressed as a rookie before taking a step back last year. This quad injury he picked up against Las Vegas certainly isn’t what he needed to get back on track.

Olszewski, a 2019 UDFA, served as New England’s punt returner for half of last season. Davis is a core special teamer who has yet to play a defensive snap this season.

The Patriots are the ninth NFL team to sign their entire 2019 rookie class, as New England has agreed to terms with third-round running back Damien Harris, according to Field Yates of ESPN.com (Twitter link). 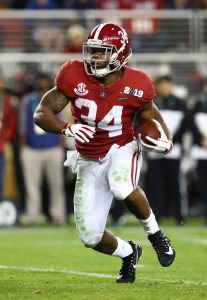 Harris, the 87th overall selection in April’s draft, will sign a four-year deal worth roughly $3.6MM. He’ll join the Patriots’ roster following a four-year career at Alabama, during which he won two National Championships and earned second-team All-SEC honors during his senior season. Harris came off the board 63 picks after fellow Tide running back Josh Jacobs, but Harris actually surpassed Jacobs in rushing attempts, rushing yards, and receptions in 2018.

Harris, who stands 5’10”, 216 pounds, topped 1,000 yards rushing in both his sophomore and junior seasons, averaging more than seven yards per carry in each campaign. In a pre-draft scouting report, Lance Zierlein of NFL.com compared Harris to former Bears/Bengals back Cedric Benson, noting Harris’ “no-nonsense” running style but identifying his lack of burst.

The Patriots already have a roster full of running backs with defined roles, including 2018 first-rounder Sony Michel, receiving back James White, and do-it-all Rex Burkhead. Harris will likely start out with a heavy role on special teams, but he could carve out a niche slot as the season progresses.