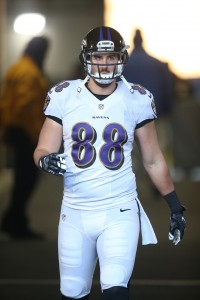 The Steelers would like to sign contract-year defensive end Stephon Tuitt to an extension before the start of the regular season, reports Ray Fittipaldo of the Pittsburgh Post-Gazette. The 24-year-old is clearly open to a new deal with the Steelers, telling Fittipaldo: “I would love it here. It’s a blessing if they see me being here for the long term. I love the organization.” Locking up Tuitt could cost the Steelers $8MM to $9MM per year, and it probably won’t become a priority until later in the summer, writes Fittipaldo. Tuitt, a second-round pick in 2014, started 14 games in each of the past two seasons and combined for 10.5 sacks in those 28 contests. He also impressed Pro Football Focus last season, receiving its 19th-best grade among 127 qualified interior defensive linemen.

As had been the fear, Ravens tight end Dennis Pitta has once again dislocated his hip, according to Mike Garafolo of NFL.com (Twitter link). Pitta will likely undergo surgery at some point, tweets Adam Schefter of ESPN.com.

When news initially broke of Pitta’s injury earlier today, Schefter reported that if Pitta had indeed dislocated his hip for the third time in four years, the veteran tight end’s career was likely finished. Now that the severity of the injury has been identified, it’s unclear if Pitta will make a quick decision regarding his playing status, or perhaps take some (deserved) time to evaluate his future.

Pitta, 32 this month, led all tight ends in receptions last season, while he also posted a career-high in receiving yards. Having agreed to a paycut earlier this year, Pittta is now slated to carry $5.2MM cap numbers in each of the next two seasons. 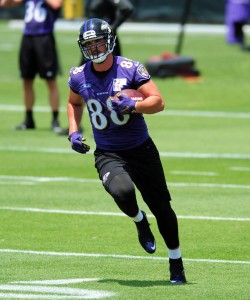 “This is incredibly disappointing, obviously for Dennis, and for the Ravens,” Newsome said in the statement. “Dennis is one of the great Ravens, and he has done everything he can to make our team better.”

The severity of Pitta’s hip injury has not been officially disclosed, but this is crushing news for Pitta, the team, and the tight end’s supporters. The fear is that Pitta fractured and dislocated his hip for third time in four years, Adam Schefter of ESPN.com tweets. If that’s the case, then his NFL career is likely finished.

For approximately four years now, Pitta has been dealing with painful hip issues that have kept him off the field. Last year, Pitta bounced back in a major way and became one of the league’s greatest comeback stories.

In 2016, Pitta set career-highs in receptions (86) and receiving yards (729) while adding a pair of touchdowns. It was especially remarkable when considering that Pitta was limited to just seven games between 2013 and 2015.

Pitta, 32 in June, was originally set to carry a hefty $7.7MM cap number in 2017 and 2018. Now, per the terms of his recently restructured pact, he’s slated to carry $5.2MM cap numbers in each of the next two seasons.

Earlier this month, Dennis Pitta agreed to a reworked deal that will allow him to remain in Baltimore. Today, we got the specifics on the tight end’s new contract.

This marks the second straight year that Pitta has agreed to rework his contract. Last year, the tight end restructured his deal and slashed his base salary from $5MM to $1MM. However, after turning in a stellar season, he earned another $3MM in incentives and nearly balanced it all out. In 2016, Pitta set career-highs in receptions (86) and receiving yards (729) while adding a pair of touchdowns. It was especially remarkable when considering that hip issues limited Pitta to just seven games between 2013 and 2015.

The Ravens have some pruning to do at tight end with Pitta, Ben Watson, Maxx Williams, Crockett Gillmore, Nick Boyle, and Darren Waller all under contract.

Dennis Pitta will be sticking around Baltimore. NFL.com’s Mike Garafolo tweets that the veteran tight end has restructured his deal with the Ravens. We learned earlier this week that the organization had approached Pitta about taking a pay cut.

Pitta, 32 in June, was set to carry a hefty $5.5MM cap number in 2017. Last offseason, the tight end had restructured his deal, cutting his salary from $5MM to $1MM (he ultimately earned another $3MM in incentives).

The seven-year veteran had the best season of his career in 2016. He set career-highs in receptions (86) and receiving yards (729), and he hauled in a pair of touchdowns. The former fourth-rounder has spent his entire career in Baltimore, playing in 66 career games. Between 2013 and 2015, the veteran only took the field for seven contests.

It’s uncertain if the Ravens would have cut Pitta had they not agreed to an extension. The team is loaded at tight end with a depth chart that also features Ben Watson, Maxx Williams, Crockett Gillmore, Nick Boyle, and Darren Waller.

In an effort to open up cap space, the Ravens have asked tight end Dennis Pitta to take a pay cut, Jeff Zrebiec of The Baltimore Sun (on Twitter). Pitta has yet to agree to anything in that respect and there is nothing imminent on that front, he adds.

Pitta, 32 in June, is slated to carry a $5.5MM cap number in 2017. It remains to be seen whether he’ll accept a hair cut here, particularly since he already did that last year. Prior to the 2016 season, Pitta agreed to trim his salary from $5MM to $1MM, though the team added $3MM in incentives which Pitta managed to secure.

Last year, Pitta had a career season, hauling in 86 receptions for 729 yards and two touchdowns. Coming off of that performance, Pitta might be inclined to explore his value on the open market, but he is fond of Baltimore and he might not get much in the way of guarantees given his age and history of hip problems.

Pitta has two more seasons to go on his five-year, $32MM contract.

Last season, Ravens tight end Dennis Pitta made a remarkable comeback and turned in his first full season since 2012. Even though he hauled in a career-high 86 catches, the Ravens could cut him loose rather than pay him $5.5MM in 2017, sources tell Mike Garafolo of NFL.com (on Twitter).

In theory, the two sides could work a restructured deal, but that’s a concession Pitta already made one year ago. Under the terms of his reworked contract, Pitta’s salary was cut from $5MM to $1MM, but the Ravens added $3MM in incentives to help bridge the gap. When he turned in his best season to date, Pitta maxed out his potential earnings by recording more than 60 catches and appearing in at least 50% of the team’s snaps. It’s not clear whether the two sides have discussed altering Pitta’s deal again or if the veteran would be open to an adjustment.

Pitta signed a five-year, $32MM contract with the Ravens in February of 2014, a gutsy move considering that he missed most of 2013 with hip issues. Years later, Pitta is healthy and producing again, but his price tag could be too rich for the Ravens’ blood.