The Colts have released linebacker D’Qwell Jackson, as Adam Schefter of ESPN.com tweets. The team has also confirmed the news via press release. 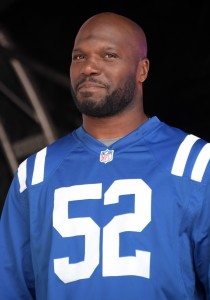 Jackson, 33, has been with the Colts for the last three seasons. He joined the team on a four-year, $22MM contract with the expectation that he would anchor the team’s linebacking core. After a Pro Bowl season in 2014, Jackson started showed signs of decline and his off-the-field missteps haven’t helped matters. In March of last year, he was found guilty of simple assault, stemming from a February 2015 altercation with a delivery driver. Then, in December, he was handed a four-game ban for violating the league’s policy on performance enhancing drugs.

The advanced metrics at Pro Football Focus have Jackson ranked as just the 80th best linebacker in the league out of 87 qualified players for 2016. By PFF’s numbers, Jackson has actually been playing below-average football for the last four seasons, with his last respectable season coming in 2012. In any case, the Colts are looking to go younger at linebacker and they were unwilling to pay Jackson a $500K roster bonus in March. Had they kept him, he would have carried a $5.75MM cap number for ’17.

The Colts are losing a starting linebacker for the rest of the regular season. D’Qwell Jackson has been handed a four-game ban for violating the league’s policy on performance enhancing drugs, according to a team announcement.

Obviously, this is a big blow to the 6-6 Colts as they fight to keep their playoff hopes alive. Now, they will likely move Edwin Jackson into a starting role. The Colts also have ILBs Antonio Morrison and Deon King in reserve.

Jackson has appeared in and started in all 12 of the Colts’ games so far this season. This year, he has 78 total tackles with one sack and two fumble recoveries. He’s doing alright in terms of traditional stats, but the advanced numbers at Pro Football Focus say he’s just the 79th best linebacker in the NFL out of 89 qualified players. In fact, Edwin Jackson is ranked higher at No. 74. For what it’s worth, Morrison and King have weak grades in their limited sample size this season.

This isn’t Jackson’s first misstep. In March, he was found guilty of simple assault, stemming from a February 2015 altercation with a delivery driver.

Earlier this week, Colts linebacker D’Qwell Jackson was found guilty of simple assault, stemming from a February 2015 altercation with a delivery driver. On Tuesday, Jackson responded to the decision by issuing the following statement, per Mike Berman of CBS4 in Indianapolis (Twitter link):

“I was surprised and disappointed by yesterday’s verdict and we are planning to appeal. I sincerely believe justice will eventually prevail. Nevertheless, I sincerely regret that this case ever happened and has gotten to this point. I will continue to live my life in a way that confirms I am a good and honorable citizen.”

While Jackson seems unlikely to face severe legal penalties, no matter how the case is resolved, the NFL could eventually hand down discipline of its own for the incident.

Over the weekend, it was reported that the NFLPA had concerns about player contracts with the Rams in light of their move from Missouri to California. That issue, as Mike Florio of Pro Football Talk writes, has been sorted out.

“The team’s legal move to California coincides with the start of the offseason program on April 18,” Rams executive V.P. of football operations and COO Kevin Demoff said via email. “As such, all contracts are still subject to Missouri law at time of signing. We were able to work with agents on a simple fix saying the contracts will transfer to California law once the team move is official.”

The union was concerned that players would be forced to pay California taxes, which are higher than Missouri taxes, on salaries incurred before the move. Now, it appears that they will be able to save some money on any paychecks processed before April 18th.

The CFL has been making major waves in the NFL in recent days, as Over The Cap’s Zack Moore writes. Chris Matthews looked like an absolute stud for the Seahawks in the Super Bowl while receiver Duron Carter and lineman Ben Heenan landed deals with the Colts. This isn’t the first time either of those two teams have gone to Canada to find talent and it’s a part of a broader trend in the NFL. The NFL is looking more and more like the CFL with its no huddle offenses, no-back sets, and shorter time between plays, making the CFL the perfect minor league. More from around the NFL..

FRIDAY, 10:45am: Jackson’s deal includes a signing bonus of just $1MM, with a guaranteed base salary of $4.5MM in 2014, according to Tom Pelissero of USA Today. 2015 includes a $4.63MM roster bonus that will be guaranteed as of next week, as well as an $870K base salary (Twitter links). The modest signing bonus will make it much more manageable for the Colts to get out of the contract in the third or fourth year without carrying much dead money.

THURSDAY, 8:33am: The Colts have reached an agreement to sign free agent linebacker D’Qwell Jackson, according to Ian Rapoport of NFL.com (Twitter link). The team’s owner, Jim Irsay, first teased the deal, tweeting: “We’ve agreed to terms with a new member of our defense…” Because he was released by the Browns last month, Jackson was free to sign with a new team before next Tuesday, when the 2014 free agent period officially begins. 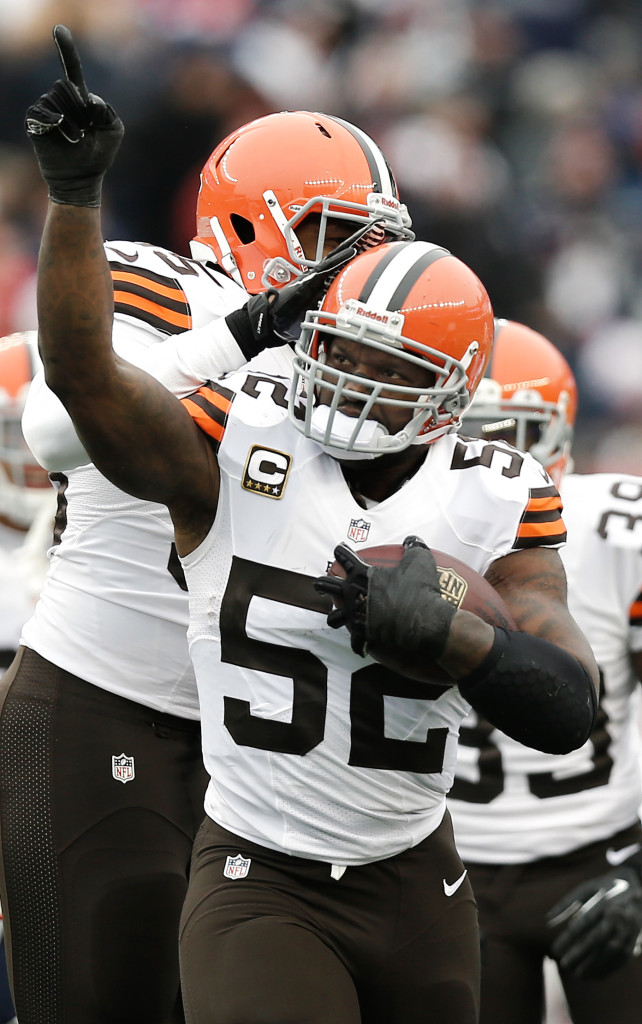 The agreement between the Colts and Jackson will be for four years and $22MM, reports Mike Garafolo of FOX Sports 1 (Twitter link). According to Garafolo, $11MM – or 50% – of the overall value of the contract will be guaranteed, though Pro Football Talk notes (via Twitter) that some of that guarantee may be for injury only.

Jackson, 30, had been expected to decide on his free agent destination by the end of the week, having narrowed his options down to the Colts, Titans, Broncos, and Dolphins. By signing in Indianapolis, Jackson will be reunited with former Browns head coach Rob Chudzinski, who was added to the Colts’ staff as a special assistant last month. Jackson will be slotted in as an inside linebacker in the team’s 3-4 scheme, playing alongside Jerrell Freeman. Pat Angerer and Kelvin Sheppard filled that position for the Colts last season, but Angerer is expected to depart in free agency, and Sheppard appears headed for a reserve role.

2013 wasn’t a particularly strong season for Jackson according to Pro Football Focus’ advanced metrics, as he ranked 42nd of 55 qualified inside linebackers. In fact, it’s perhaps a bit of an upset to see the veteran sign with another 3-4 team, since he has historically graded better as the middle linebacker in a 4-3 system. Still, Jackson was a longtime defensive leader in Cleveland, and he racks up tackles, having easily surpassed 100 in each of his healthy NFL seasons since his rookie year. The former 34th overall pick will undoubtedly be an upgrade for a Colts defense in need of improvement.

With Jackson locked up, expect the Colts to turn their free agent focus to wide receivers and defensive lineman, according to Jason La Canfora of CBSSports.com, who thinks that Arthur Jones of the Ravens would be a “natural fit” (Twitter link).

The agent for D’Qwell Jackson says that his client asked for his release from the Browns and adds that his client is happy to be with the Colts, tweets Jeff Schudel of The News-Herald. Cleveland would have owed Jackson a $4MM roster bonus on March 16th but they cut him loose well in advance. This could be a case of Jackson’s agent trying to put a positive spin on things – it’s more likely that the Browns asked him to take a pay cut that was too steep for his liking.

The Bills are getting an early start on perusing this year’s crop of free agent linebackers. After meeting with Jameel McClain, who was released last week by the Ravens, Buffalo is hosting another free agent LB today, as Jasper Brinkley comes to town, according to Chris Brown of BuffaloBills.com. Brinkley was cut last Friday by the Cardinals.

D’Qwell Jackson isn’t the most intriguing name among 2014’s class of free agents, but he’s perhaps the most notable player available before next Tuesday. Because he was released by the Browns last month, Jackson can sign with a new team immediately, and he’s expected to make a decision within the next couple days, a source tells Master Tesfatsion of the Star Tribune.

Jackson has visited with several teams within the last week and has narrowed down his choice to four potential destinations, according to Tesfatsion: The Titans, Broncos, Dolphins, and Colts. The Vikings, Cardinals, and Redskins were among the other clubs said to have interest in the veteran inside linebacker, but they didn’t make the cut for Jackson’s short list.

Jackson had been a starter for the Browns since the club selected him in the second round of the 2006 draft. Despite leading the team in tackles in 2013, Jackson graded poorly as a run defender in Pro Football Focus’ advanced metrics, and placed 42nd overall out of 55 qualified inside linebackers (subscription required). Still, the Maryland alum was Cleveland’s longtime defensive leader on defense and is still just 30 years old, so he should have a few more solid seasons left in him.