If it weren’t for his back issues, Virginia Tech cornerback Caleb Farley would likely be a top 10 prospect in this week’s draft. But, despite the medical risk, agent Drew Rosenhaus insists that his client will be taken somewhere in the top 20.

“I’ve had multiple teams tell me that in the middle of the draft, they are going to draft him,” Rosenhaus told NFL.com’s Tom Pelissero and Ian Rapoport (Twitter link). “I don’t expect him to make it to pick No. 20. I’m convinced, based on my discussions, that he’ll go in the first 20 picks.”

Farley hasn’t played since 2019 and he’s gone under the knife twice since then. His most recent operation came in March, but his surgeon has told clubs that Farley should be cleared before training camp in late July. Even though Rosenhaus’ estimation should be taken with a grain of salt, that’s excellent news for Farley in advance of Thursday night.

Originally a quarterback in high school, Farley committed to the Hokies in 2017 as a wide receiver. After an ACL tear wiped out his true freshman season, he was asked to change positions again — this time, he moved to cornerback. By 2019, he was a star for Virginia Tech, racking up four interceptions and 12 passes defensed en route to First-Team All-ACC honors. He also allowed a completion rate of less than 50% on passes thrown in his direction.

In 2020, Farley opted out due to the pandemic. Then, while preparing for the draft, he irritated a joint at the base of his spine. Rosenhaus seems to think that Farley’s potential will vault him into the top half of the first round, but it’s not hard to imagine him sliding to Day 2.

Aaron Jones doesn’t want to wait much longer for a deal. With contract negotiations at an impasse, the Packers running back fired his agent and hired Drew Rosenhaus as his new representative (Twitter link via Adam Schefter of ESPN.com). He’ll make the move along with his brother, Alvin Jones, a former UTEP and Ravens linebacker. 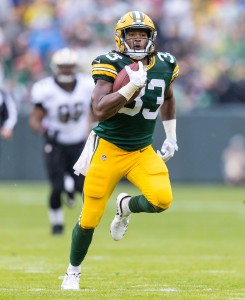 Jones is in the final year of his rookie deal and the former fifth-round pick is in line for a serious pay bump. After averaging 5.5 yards per carry in a limited sample through his first two years, Jones has proven that he can produce as a primary back. Last year, he notched 1,084 yards on the ground with 4.6 yards per tote. This year, he’s got 800+ yards across eleven games with an average of 5.1 yards per touch. He’s a receiving threat, too, having already snagged 38 passes for 285 yards and two scores in 2020.

The fourth-year pro won’t top Christian McCaffrey‘s contract, but he’ll aim high as he looks to secure the bag. In the meantime, he’ll keep the focus on the field as the Packers look to wrap up the conference.

Here are some updates on a number of players’ representation, all reported by Liz Mullen.

Antonio Brown is without an NFL team and without an agent. On Thursday, agent Drew Rosenhaus “conditionally” dropped the wide receiver as a client (Twitter link via Adam Schefter of ESPN.com).

Rosenhaus informed the NFLPA of his decision in a letter, explaining that he will not represent Brown until he seeks counsel. The agent says he would like to work with Brown, but he will not do so unless he gets help.

Brown, clearly, has bigger fish to fry before he resumes his focus on the NFL. Since being placed on the commissioner’s exempt list, Brown has made a number of bizarre posts on social media, ranging from unprofessional to downright scary. Most recently, he broadcasted a profanity-laced argument with police officers and the mother of one of his children.

Rosenhaus has fought Brown’s battles in radio interviews over the past few months, expressing his frustration with the league’s slow-moving investigation that has kept Brown in a holding pattern. At this point, the NFL has no real motivation to hurry things up and it’s unlikely that Roger Goodell wants Brown back on the field as he continues to find off-the-field trouble.

For many years, Brown was the focal point of the Steelers’ passing attack and one of the league’s very best wide receivers. Things deteriorated over time, however, leading him to the Raiders. The late summer drama over Brown’s helmet and his willingness to play now seems like a distant memory. Since then, Brown has faced multiple accusations of sexual assault, been released by the Patriots, and placed in indefinite limbo by a sport that doesn’t know exactly what to do with him.

In spite of all of this, teams expressed interest in signing Brown, pending the outcome of the NFL’s investigation. The Saints worked Brown out just a few weeks ago, then passed on him. Brown, who came to the audition flanked by an entire camera crew, later accused the Saints of working him out as a publicity stunt.

Brown has now lost one of his biggest allies and it’s clear that he’ll have to make wholesale changes to his life before he can get anywhere near the field again.

Raiders first-round pick Jonathan Abram will seek a second opinion on his shoulder, Josina Anderson of ESPN tweets. The rookie apparently injured his shoulder on Monday night against the Broncos but continuing playing, showing no signs of injury during the game. Now, after undergoing exams, it appears Abram could land on injured reserve.

Antonio Brown missed another practice on Sunday, but Drew Rosenhaus is doing his darndest to keep the hysteria to a minimum. On Monday morning, Rosenhaus went on WSVN-TV’s “Sports Xtra” to discuss the Raiders star. 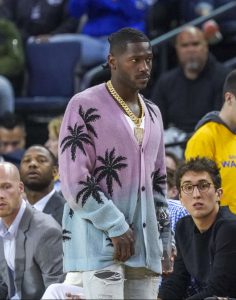 “We have worked very closely with the Raiders, and will continue to work very closely with the Raiders,” Rosenhaus said. “I’m not sure we agree that we’ve exhausted all the options, as [Raiders GM] Mike Mayock said, but there’s no doubt it’s still an ongoing process. We are trying to work with the team and the league and the union on a solution. We haven’t figured that out yet.

“To say that AB is upset about the decision to not let him wear his helmet is accurate, but we’re still processing it and figuring it out. I wouldn’t make too much about him not being there today, as much as we’re still trying to come up with a solution that works for everyone.”

The league is allowing Brown to find a version of the Schutt AiR Advantage helmet that can pass rigorous NOCSAE testing, but it’s not clear if he’ll be able to get clearance on his favorite headgear.