Fozzy Whittaker‘s season has ended before it could even begin. The Panthers announced the running back has been placed on injured reserve with a non-contact ACL tear. 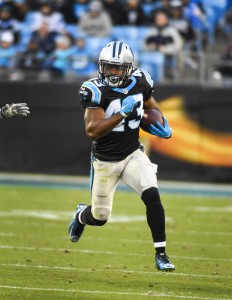 Whittaker, 29, has spent the last four seasons with the Panthers. For the most part, he’s been used as a reserve option and a third-down running back. He saw the most usage of his career in 2016 when he carried the ball 57 times and averaged an impressive 4.6 yards per try in that limited sample. Last year, however, he had just seven carries in 12 games.

The Whittaker injury is bad news for Carolina, but they are not lacking options in the backfield. The Panthers will start Christian McCaffrey with 1,000-yard rusher C.J. Anderson getting a fair amount of work as well. Cameron Artis-Payne is also on hand for backup work and newcomer Elijah Hood figures to have a better chance at making the roster now that a spot has opened up.

The former undrafted free agent originally joined the organization during the 2014 season, and he proceeded to play in at least 10 games during each of his three seasons with the Panthers. The 28-year-old had his best NFL season in 2016, setting career-highs in yards (265), attempts (57), yards per carry (4.6), catches (25) and receiving yards (226).

The running back will presumably resume his role as the Panthers third running back, slotted in behind Jonathan Stewart and Cameron Artis-Payne.

We will post any and all “minor moves” right here over the course of the day:

Rob DiRe and Ben Levine contributed to this post.

Young, who turns 31 this weekend, signed a contract with the Browns at the start of May after participating in the team’s minicamp. The former Pro Bowler spent time in camp with the Packers in 2013 and the Bills in 2012, but was released prior to the regular season in both instances, and hasn’t seen any real NFL playing time since 2011 in Philadelphia.

With Young and Tanney out of the picture, the quarterbacks on Cleveland’s roster include Brian Hoyer, Tyler Thigpen, Connor Shaw, who agreed to sign as an undrafted free agent, and, of course, 22nd overall pick Johnny Manziel.

Free agent running back Ben Tate is expected to sign with the Browns today, according to John Telich of Fox 8 News in Cleveland. The deal, contingent on Tate passing a physical, is reportedly performance-based, says Telich (via Twitter).

Tate, 25, has played 40 games over three seasons (nine starts in place of injured starter Arian Foster) and totaled 421 carries for 1,992 yards (4.7 yards per carry) and 10 touchdowns with 58 receptions for 287 yards (4.9 yards per catch) and zero touchdowns. However, he has been on IR twice in his young career. He missed 2010 because of a broken ankle and dealt with foot, hamstring and rib injuries in 2012.