George Iloka‘s Vikings reunion will not include any more games in 2020. The veteran safety suffered a torn ACL in practice Wednesday, according to the St. Paul Pioneer Press’ Chris Tomasson (on Twitter). 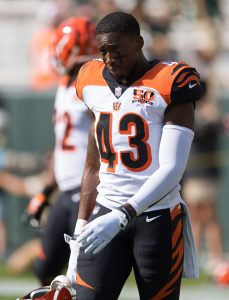 The Vikings placed Iloka on injured reserve Thursday. The sides reunited just before the season through a practice squad agreement, but Iloka played in Minnesota’s past four games.

Mike Zimmer‘s final Bengals defense featured Iloka as a 16-game starter, and he held that role in Cincinnati through the 2017 season. The Bengals released Iloka in 2018, leading him to a Zimmer reunion in the Twin Cities. The Vikings used Iloka as mostly a depth piece in ’18, with Anthony Harris moving into the starting lineup alongside Harrison Smith. That was Iloka’s role this season as well.

Iloka, who sat out the 2019 season, made six tackles for the Vikes this year. He played 43 defensive snaps in Week 4 but totaled only two in the past two games. Set for free agency, Iloka will turn 31 ahead of the 2021 season.

George Iloka is back on the Vikings active roster. This time, he might actually stick around. NFL Network’s Mike Garafolo tweets that Minnesota has signed the veteran safety to their 53-man roster.

The Vikings had elevated Iloka from the practice squad for each of their past two games. However, teams are only allowed to seamlessly elevate each practice squad player twice. So, this time around, the front office was required to sign Iloka to the 53-man roster.

After appearing in 16 games for Minnesota during the 2018 campaign, Iloka sat out the 2019 season. He re-joined the Vikings this past summer, and he’s proceeded to compile six tackles through two games. During last weekend’s win over the Texans, the 30-year-old filled in for Harrison Smith following the starter’s ejection, and Iloka proceeded to play 66-percent of his team’s defensive snaps.

“I think George did a good job of trying to come and be that Swiss Army knife,” safety Anthony Harris told Mark Craig of the Star Tribune earlier this week. “He’s working hard to pick up as much as he can and be as versatile as he can. And he was able to come in and make some plays for us and allow us to play as a unit good enough to come out with a win.”

George Iloka is on track to see game action for the first time since the 2018 season finale. The Vikings promoted the veteran safety from their practice squad.

Minnesota added Iloka late this summer, doing so after hosting him twice. Iloka brings extensive experience for a practice squad player, joining a few players in that regard in this historically unusual season, and will resume his career with the team for which he last played. Iloka played 16 games for the 2018 Vikings but was out of football last season.

The Vikings are off to a brutal start, having been unable to compete with the Packers and Colts. Their defense ranks 20th in DVOA. Minnesota lost several starters from recent years — Trae Waynes, Xavier Rhodes, Mackensie Alexander, Linval Joseph, Everson Griffen — and is also down cornerbacks Mike Hughes and Cameron Dantzler for its Week 3 game against Tennessee. Danielle Hunter also remains on IR, with Anthony Barr out for the season. Iloka will return to a defense featuring few familiar faces.

The team, however, still employs top-tier safety tandem Harrison Smith and Anthony Harris. Iloka adds 99 games’ (and 79 starts’) worth of experience to the Vikings’ safety group. He has played under Mike Zimmer in four his seven seasons, doing so with the Bengals and Vikings.

To help out at corner, the Vikings are also promoting Mark Fields.

Vikings To Sign George Iloka To The Practice Squad

The Vikings are set to sign George Iloka to their practice squad, according to Chris Tomasson of the Pioneer Press (on Twitter). From there, Iloka is likely to be flexed into the active roster, giving the Vikings some sorely needed support at the safety position.

As it stands, the Vikings have Anthony Harris and Harrison Smith at safety with recent callup Nate Meadors serving as the only reserve for both players. That’s less than ideal, especially since Meadors is a converted cornerback. Iloka, on the other hand offers years of NFL experience, including three seasons under Mike Zimmer‘s tutelage.

Iloka hasn’t seen live action since his 2018 season with the Vikings. In that season, Iloka appeared in all 16 games while starting in three. He’s best known for his time with the Bengals, where he played for six years and served as a starter for five. During his run with the Bengals, the Boise State product registered nine interceptions and made 446 tackles.

In other Vikings news, the club has restructured the contract of Eric Kendricks to free up millions in cap space. With cooperation from the veteran linebacker, they were able to formally ink running back Dalvin Cook to his brand new five-year, $63MM extension.

George Iloka met with the Vikings for a second time this year, working out Tuesday. That is expected to lead to a reunion.

The veteran safety is going through COVID-19 testing protocols and is expected to sign with the Vikings later this week, Chris Tomasson of the St. Paul Pioneer Press tweets.

The Vikes were not especially interested in bringing Iloka back last week, due to his vested-veteran status mandating his salary become guaranteed at the season’s outset, Tomasson adds (on Twitter). With that no longer an issue, it appears Mike Zimmer will have a familiar face back in his secondary.

A former Bengals draftee who played for Zimmer in Cincinnati from 2012-13, Iloka last played in the NFL in 2018 with the Vikings. Although he played in 16 games with Minnesota that season, he was out of football in 2019. The Vikings previously met with Iloka in mid-August.

In Week 1, the Vikings carried just two pure safeties on their active roster — starters Harrison Smith and Anthony Harris. They promoted Nate Meadors from their practice squad last week, however, and have converted him from cornerback to safety. Iloka, however, brings extensive experience at the position and has three seasons in Zimmer’s system. Iloka, 30, was a full-time Bengals starter from 2013-17.

The Vikings brought in the veteran safety for a visit, per NFL.com’s Tom Pelissero (on Twitter). Iloka played for Mike Zimmer for two seasons in Cincinnati (2012-13) and was a Viking in 2018. That marked Iloka’s most recent game action. He sat out the 2019 season.

Now 30, the former Bengals fifth-round pick follows Jahleel Addae in visiting the Vikings, who did not end up signing Addae. Iloka played in 16 games with the Vikings two years ago, starting three. Anthony Harris used 2018 as a breakout slate, becoming a full-time starter alongside Harrison Smith that year. An Iloka role in Minnesota this time around would certainly feature him as a backup to Smith and Harris. The Vikings lost Jayron Kearse in free agency and feature a much younger secondary than they have in recent years.

Iloka was a five-year Bengals starter, beginning that run with 16 starts under Zimmer in 2013. He made three starts for the Vikes in 2018. He has 79 starts’ worth of experience but has been out of the league since his previous one-year Vikings contract expired.

Falcons To Meet With Iloka, McDonald

The Falcons will meet with George Iloka and T.J. McDonald for visits on Tuesday, Mike Garafolo of NFL Network tweets. One, or both players, could help solidify the Falcons’ secondary in the wake of Keanu Neal‘s season-ending Achilles tear.

Iloka, who spent 2018 with the Vikings, missed the Cowboys’ final cut. The Cowboys guaranteed the 29-year-old $210K before his release, so he walked away with some spending cash. Since entering the NFL as a Bengals fifth-rounder in 2012, Iloka has started in 79 games.

The Colts, who will be without Malik Hooker for a while, will begin their safety search by meeting with Marcus Gilchrist.

Connected to safeties for well over a year now, the Cowboys are set to again go with their Xavier Woods–Jeff Heath tandem. The team will release George Iloka, according to Jon Machota of The Athletic (on Twitter).

The Cowboys signed Iloka earlier this offseason to compete with Heath, but the incumbent won the position battle. This will mark another late-summer exit for the former Bengals starter. Cincinnati cut Iloka in late August of last year, and the longtime first-stringer landed with Mike Zimmer in Minnesota.

Both the Vikings and Cowboys added Iloka on league-minimum deals. The Cowboys guaranteed the 29-year-old defender $210K. Iloka has started 79 games since being a 2012 Bengals fifth-rounder. Only three came last season with the Vikings. Iloka played 117 defensive snaps in 2018.

Dallas resisted the urge to trade for Earl Thomas in 2018 and to sign the Texas native this year, going with Iloka for depth purposes. This will be Heath’s third season as a full-time starter and Woods’ seconds. The Cowboys still have sixth-round safeties Kavon Frazier and Donovan Wilson, a rookie, on its roster going into Saturday’s cutdown day.

For a minute there, the Eagles considered tagging quarterback Nick Foles. This week, owner Jeff Lurie confirmed what had been widely rumored – the tag was considered only to stop Foles from potentially leaving for the rival Giants or Redskins (Twitter link via Mike Garafolo of NFL.com). However, when it became apparent to the Redskins that Foles would be leaving the conference altogether by signing with the Jaguars, the Eagles opted against the move.

Foles was beloved in Philadelphia, but holding on to him as Carson Wentz‘s backup would have been an expensive proposition. Instead, the Eagles allowed him to fly away while putting their limited cap space into other areas.