Let’s take a quick spin around the AFC North:

The Browns have made their second huge splash of the day. Hours after signing Austin Hooper and making him the highest-paid tight end in league history, they’ve doled out another big contract. Cleveland has agreed to terms with offensive tackle Jack Conklin on a three-year deal, agent Drew Rosenhaus told Adam Schefter of ESPN.com (Twitter link). 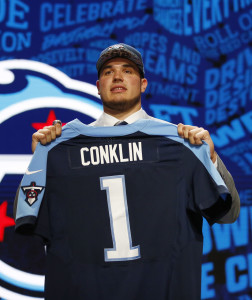 Conklin is getting $42MM over the three years, with $30MM of it being guaranteed. He’ll bring in $20MM just in the first year of the contract. Conklin likely could’ve landed a longer-term deal, but Rosenhaus told Schefter they wanted to keep it short due to projected increases in the salary cap so he can hit free agency again soon. Conklin is very young for a top-flight free agent, and will still only be 28 when this new deal ends.

Just minutes ago we heard the Browns were the favorites with the Jets still in the mix, and things came together quickly. Conklin was the eighth overall pick out of Michigan State in 2016, and he’s been the Titans’ right tackle for the past few seasons. Tennessee declined his fifth-year option following a torn ACL and injury-plagued 2018 campaign, a move which blew up in their face when Conklin returned to playing at a very high level last year.

Conklin was one of the top offensive linemen available, and fills a huge need for Cleveland. The Browns already announced they won’t be re-signing Greg Robinson and there has been speculation they’ll move on from Chris Hubbard, both of their starting tackles from last year.

They now have Conklin locked in at one of those spots, and it’s possible they’ll still pursue veterans Trent Williams or Jason Peters like they’ve reportedly been considering. Baker Mayfield was frequently under duress last season, and his play suffered significantly as a result. He got skittish in the pocket at times, and upgrading his protection was always going to be a priority this offseason. With the additions of Hooper and Conklin today, his job has gotten a whole lot easier.

The Browns have already made one big splash in free agency by making Austin Hooper the highest-paid tight end in NFL history, and it sounds like they could make another soon. Cleveland is the favorite to land free agent offensive tackle Jack Conklin, Connor Hughes of The Athletic hears (Twitter link). 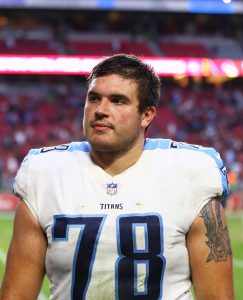 Hughes reports that the Jets are still in the mix, but that “there’s a price many believe they will not exceed.” There was a report a few weeks ago that Conklin would likely sign with New York, but that was quickly shot down by Adam Schefter. Conklin has been the Titans’ starter at right tackle for the past four seasons, and is one of the top offensive linemen available. Tennessee declined Conklin’s fifth-year option after an injury-plagued 2018 campaign, a move they likely came to regret as the Michigan State product returned to playing at a high level this past season.

The eighth overall pick of the 2016 draft, Conklin is still only 25. The Browns won’t be re-signing the recently arrested Greg Robinson and there’s been speculation they could move on from Chris Hubbard as well, which would leave them without both of their starting tackles from last season. Obviously, they’ll be doing something to address the position.

We’ve heard that they’ve been considering veteran tackles Trent Williams and Jason Peters, although Conklin is a lot younger than both of those guys and as such is the more appealing long-term option. We heard last month that the Browns were planning to make a big investment in their offensive line this offseason, and it sounds like they’re following through. Whoever Conklin signs with, he should be in for a huge payday.

It seemed that one of the most prominent free agent offensive linemen had already come off the board earlier Sunday. Reports emerged that at least one team had been informed that right tackle Jack Conklin would sign with the Jets as soon as free agency began. However, Adam Schefter of ESPN reports that Conklin is “not expected” to land with Gang Green in free agency.

While Schefter notes the Jets, who are looking to upgrade their offensive line, have interest in Conklin and a plethora of cap space, the competition for Conklin’s services are expected to be “intense” and bring him out of New York’s price range.

Conklin was the eighth overall pick in the 2016 Draft by the Titans and has started each of the 57 games he’s appeared in over his four-year career. He has proven himself as a solid starter at right tackle but failed to develop into an elite player, which led Tennessee to decline his fifth-year option, which allows him to enter the open market this summer.

The Jets may be overhauling their entire offensive line this offseason, they have about $50MM in salary cap space, and RT Jack Conklin looks more likely to hit the open market than be retained by the Titans. We recently heard that New York has expressed “serious interest” in the 2016 first-rounder, and now there is more evidence that Conklin could be headed to Gang Green.

Per Mike Florio of Pro Football Talk, one NFL team has been informed that Conklin plans to sign with the Jets when free agency officially opens on March 18. Florio is careful to put that leak into context, saying that it does not mean that New York has reached a wink-nod deal with Conklin’s camp, and it does not even mean that the two sides have talked (though they probably have).

Several days ago, we learned that the Titans would like to strike a deal with QB Ryan Tannehill quickly so that they can then use their franchise tag and transition tag on Derrick Henry and Jack Conklin. But if that doesn’t happen, or if the team is prohibited from using both tags as a result of the new CBA, Conklin would probably be the member of that trio to shake loose (plus, if the Titans put the transition tag on Conklin, it wouldn’t prevent the Jets or some other team from signing him to an offer sheet that Tennessee wouldn’t want to match).

Last May, the Titans declined the fifth-year option on Conklin, which would have kept him under contract through the 2020 season. Now, he is likely to leave the team without one of Tannehill’s top protectors and one of Henry’s road graders. Conklin graded out as the 15th-best tackle in the league in 2020, per Pro Football Focus’ advanced metrics, and he could well land a deal that pays him $16-18MM per year (or more).

If the Jets do strike an accord with Conklin, look for GM Joe Douglas to address the rest of his O-line needs in the draft.