Jamie Collins is reuniting with Matt Patricia. The free agent linebacker has signed with the Lions, reports Albert Breer of TheMMQB.com (via Twitter). It’s a three-year deal worth $30MM, including $18MM guaranteed, per NFL.com’s Ian Rapoport (Twitter link). 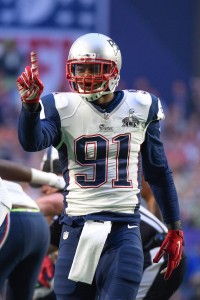 Following a two-plus year stint with the Browns, Collins reunited with the Patriots last offseason on a one-year deal. The 30-year-old ended up setting a career-high with seven sacks to go along with 81 tackles, three interceptions and three forced fumbles. Collins played under Patricia during his first stint in New England.

We’ve heard several times (including earlier tonight) that the Saints were pursuing the veteran linebacker. The Patriots were also hoping to retain their former second-round pick. Ultimately, Collins presumably decided to take the money and the opportunity to team up with his former coordinator.

The Lions were busy this morning, handing out a massive contract to former Eagles offensive tackle Halapoulivaati Vaitai. Tonight, they’ve clearly shifted their focus to the defensive side of the ball.

The Saints are eyeing Jamie Collins. Nick Underhill reports (via Twitter) that the team has made an offer to the veteran linebacker. However, the reporter cautions that “it might take more to close the deal.” 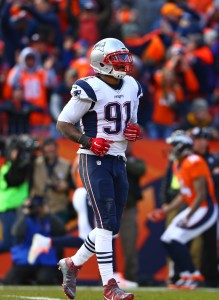 Following a two-plus year stint with the Browns, Collins reunited with the Patriots last offseason on a one-year deal. The 30-year-old ended up setting a career-high with seven sacks to go along with 81 tackles, three interceptions and three forced fumbles.

We heard earlier this month that the Saints could have interest in the veteran, even with the organization already rostering a 30-something starting linebacker in Demario Davis.

Unsurprisingly, the Patriots were also reportedly looking to retain the veteran. New England has already agreed to new deals with a pair of stalwarts in Devin McCourty and Matthew Slater.

Jadeveon Clowney has drawn interest from other teams — the Colts and Giants among them — but the Seahawks remain interested in bringing him back. However, they may not be ready to pay top dollar for the former No. 1 overall pick. The Seahawks are trying to extend Clowney before he hits free agency March 18, but Jeremy Fowler and Dan Graziano of ESPN.com report the franchise is unlikely to compete with a true top-market price (ESPN+ link). If the bidding goes into the $18-$20MM-per-year range, which it almost certainly will given other teams’ franchise tags keeping edge players off the market, the Seahawks are not expected to go there. This would mean the Seahawks will have lost two standout edge rushers in two years, after trading Frank Clark to the Chiefs. Seattle, which did not see much from first-round defensive end L.J. Collier last season, is set to carry more than $44MM in cap space.

Both the Colts and Titans are interested and are not afraid of Clowney’s asking price, per Fowler and Graziano. A new entry in the Clowney sweepstakes, Tennessee could use edge help but seemingly has key issues to sort out involving Ryan Tannehill (or a replacement) and Derrick Henry first.

Here is the latest from the free agency market, shifting to one of this era’s top cornerbacks:

The Jets officially have a new regime in charge. After a lengthy search, New York settled on Joe Douglas to be their new general manager. The Douglas/Adam Gase partnership will certainly be an interesting one, and now all eyes are on how Douglas will proceed with the team. To predict how Douglas will manage the franchise, Rich Cimini of ESPN.com took a look back at his time in Philadelphia and the Eagles’ philosophy under Howie Roseman. Cimini came to several conclusions, including that Jets fans should “watch the early strike” and look for Douglas to wrap up cornerstone pieces aggressively.

Cimini notes the Eagles’ recent early extending of Carson Wentz as the latest example of that philosophy. He also writes that the Jets “have been lagging in this area,” and kicked the can down the road on many of their soon-to-be free agents like Leonard Williams and Robby Anderson. Cimini also has the scoop on some shuffling the Jets did in the front office, including promoting Greg Nejmeh to director of pro personnel. Cimini also writes that Douglas’ track record shows he’ll make the offensive line a priority. It’s “too late for a 2019 overhaul, but this will be one of the stories next offseason,” Cimini says. Keeping Sam Darnold upright is the most important thing for the team, so that would make a lot of sense.

Here’s more from the AFC on this quiet Sunday:

Jamie Collins is back in New England. The Patriots have agreed to sign the linebacker, according to Jim McBride of the Boston Globe (on Twitter). Terms of the deal are not yet known.

Collins huddled up with his old team on Wednesday and it didn’t take long for a deal to come together. Collins began his career with the Patriots in 2013 and was a staple of their defense up until 2016, when he was shipped to the Browns. His run in Cleveland didn’t go as planned, unfortunately, and ended with his release in March.

It’s possible that Collins has lost a step since his first run with the Pats, but he could theoretically return to form in Bill Belichick‘s system. When healthy, and motivated, Collins profiles as one of the better off-ball linebackers in the NFL.

Collins managed 138 tackles in 2014 and earned a Pro Bowl nod in 2015 after amassing 5.5 sacks. He was also a key contributor to the Pats’ 2014 team and helped defeat the Seahawks in Super Bowl XLIX.

Patriots In Talks With Jamie Collins

The Patriots are in talks with free agent linebacker Jamie Collins, according to Ian Rapoport of NFL.com (on Twitter). If signed, the deal would bring Collins back to the team and system that made him a star.

Collins became an integral part of the Patriots’ defense after being selected in the second round of the 2013 draft. He truly broke out in 2014 when he became a full-time starter for the club in 2014 and, in 2015, he earned his first ever Pro Bowl selection after notching 5.5 sacks, a strong showing for an off-the-ball linebacker.

Before the 2016 trade deadline, the Patriots shipped Collins to the Browns. Collins was in his contract year and pushing for a high-priced deal that the Patriots were unwilling to give him. Collins was also said to be “freelancing” – going into business for himself on plays to ensure that he would add to his tackle total. Clearly, that didn’t sit well with Bill Belichick & Co., but they could be willing to let bygones by bygones in 2019.

Collins’ Browns run came to an end in March when the Browns released him instead of paying him upwards of $10MM for the upcoming season. Last year, Collins registered 104 tackles and four sacks across 16 games, but he graded out as just the No. 58 ranked LB in the NFL, per Pro Football Focus.

The Browns released Jamie Collins, according to a team announcement. The linebacker was due more than $10MM for 2019, an unpalatable amount given his lack of production last season. 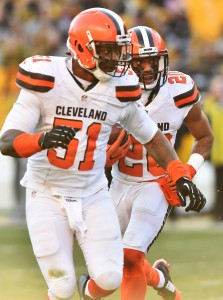 “We want to thank Jamie for his contributions to the Cleveland Browns,” said general manager John Dorsey in a statement. “These types of decisions are never easy. Jamie is a respected veteran player in this league and we wish him the best as he continues his career.”

The Browns first tried to trade Collins, according to Ian Rapoport of NFL.com (on Twitter), but they were unable to find a taker. The Browns also tried to move Collins at last year’s trade deadline, but couldn’t get a deal done.

Of course, that’s not to say Collins is washed up. Last year, Collins registered 104 tackles and four sacks across 16 games and graded out as just the No. 58 ranked LB in the NFL, per Pro Football Focus. However, his contract made him the highest-paid traditional linebacker in the league and he has not been performing at that level.

Collins joined the Browns in a mid-season trade with the Patriots in 2016. Collins was outstanding in New England, but the Patriots were unwilling to make a sizable commitment to him as his contract was drawing to a close. He also didn’t help his case by allegedly “freelancing” on defense in order to pad his stats.

Releasing Collins will give the Browns an additional $9.25MM in cap room versus just $2.5MM in dead money. The Browns now have approximately $81MM in cap space, giving them the third-highest total in the NFL.