Broncos right tackle Ja’Wuan James announced that he will opt out of the 2020 season. In a message to his fans (Twitter link), James explained that he made the decision to protect the health of his wife and newborn son. 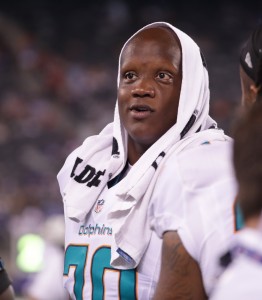 James joined the Broncos on a four-year, $51MM deal last year and lost the bulk of the season to injury. Now, he’ll pass on the 2020 season and have his $10MM base salary toll into 2021.

Upwards of 40 players have opted out of the 2020 season, as shown in PFR’s tracker. As expected, a number of lineman who could be classified as higher-risk have made the decision to stay home. The deadline for opt out decisions still remains TBD – the NFL wants to schedule Wednesday as the cut-off date, but the window could remain open longer.

James’ last full season came in 2018, with the Dolphins. In that year, Pro Football Focus measured the former first-round pick as a top-35 tackle last season. He’s been a starter since entering the league, but injuries have kept him out of action for extended periods – James missed eight games in 2017 and nine in 2015.

After a quiet Monday afternoon, the Broncos are spending big as the night progresses. They have reached an agreement to bring in Ja’Wuan James, Adam Schefter of ESPN.com tweets.

This will be a massive deal, with Schefter adding the five-year Dolphins blocker will become the NFL’s highest-paid right tackle. James will receive a four-year, $52MM deal, with $32MM of that being guaranteed. This comes barely an hour after the Broncos authorized a three-year, $33MM deal for Kareem Jackson. 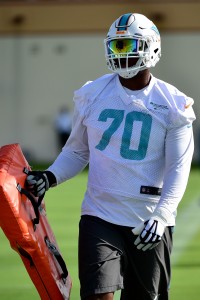 Denver’s big move figures to stop its streak of one-and-done right tackle starters. Since Orlando Franklin was moved to guard before the 2014 season, the Broncos have used a different primary right tackle each year. This will mark the sixth straight season the Broncos will have a new Week 1 right tackle, but James has been a target for a while.

The Broncos had a trade in place to acquire James from the Dolphins, who would have gotten C.J. Anderson in the 2018 proposal, but Miami nixed the move and kept James as its right tackle starter. Although the Dolphins are taking a rebuilding approach this offseason, Chris Grier said at the Combine they wanted to retain James.

This represents a major markup at the right tackle position, with Lane Johnson previously being the only eight-figure-per-year player here. James’ $13MM-AAV deal will easily usurp the Eagles stalwart’s status ($11.25MM per year) at this spot.

Pro Football Focus has measured James, a 2014 first-round pick, as an above-average tackle. He graded as a top-35 tackle last season. The former Tennessee Volunteer, though, has encountered injury troubles. He missed eight games in 2017 and nine in 2015. Other than that, the 26-year-old blocker was Miami’s starter since Week 1 of his rookie year.

Denver pivoted from Franklin to Chris Clark to Ty Sambrailo to Michael Schofield to Donald Stephenson to Menelik Watson to Jared Veldheer. That succession will stop with James, with this contract tethering him to the Broncos for years.

The Raiders may have just traded away their best offensive lineman when they agreed to ship Kelechi Osemele to the Jets, but they still want to fortify the O-line in free agency. Per Ian Rapoport of the NFL Network (video link), offensive tackle Trent Brown is high atop Oakland’s wish list. 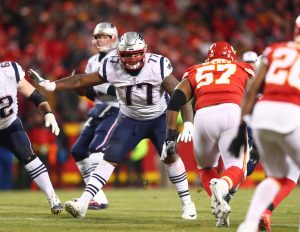 Brown had an excellent platform season in his first (and likely final) year with the Patriots in 2018, starting all 19 regular and postseason games for New England en route to a Super Bowl championship. Pro Football Focus was bullish on his performance, ranking him 32nd among 80 eligible linemen.

The Buccaneers just inked Donovan Smith to a three-year pact worth $41.25MM ($27MM guaranteed), and it would not be a surprise to see Brown top that figure in terms of years, AAV, and total guarantees. That is especially true given that he profiles as the best left tackle on the free agent market by a wide margin.

Rapoport confirms as much, tweeting that Brown could be among the highest-paid tackles in the league. He turns 26 next month and clearly has Pro Bowl upside. RapSheet also says Brown could make his decision early on in the tampering window, which opens in less than an hour. The Patriots declined to use the franchise tag on him but are still interested in re-signing him, and the Texans have some interest as well. Brown, though, may prefer a different destination, as Vic Tafur of The Athletic tweets that head coach Jon Gruden does not plan to move 2018 first-round pick Kolton Miller from left tackle.

Per Michael Gehlken of the Las Vegas Review-Journal, Oakland is also interested in Dolphins right tackle Ja’Wuan James (Twitter link). New GM Mike Mayock is prioritizing the offensive tackle position, per Gehlken, and while Miami would like to retain James, the rebuilding Fins may find it difficult to do so.

The Dolphins met with cornerback Xavien Howard to discuss a new long-term deal, according to ESPN.com’s Cameron Wolfe. Howard is set to enter the final year of his rookie deal this year, so a fresh contract could make sense for both sides. 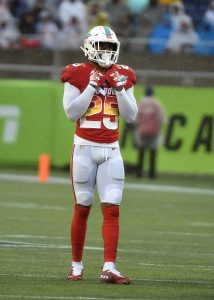 Howard is expected to command at least $15MM annually on his next contract, but it’s unclear if Miami is willing to go that high. Some have speculated that Howard could be a trade candidate, but the Dolphins say he’s staying put.

“Yes, I’m very confident that he’ll be there. Xavien has been in the building. He’s coming back, working out and getting in shape again after the Pro Bowl,” GM Chris Grier said. “He’s doing good. We’ve been hanging out around him. He wants to be a Miami Dolphin and we want him to be a Dolphin.”

If the Dolphins can’t hammer out a deal with Howard, they can wait until next year and potentially cuff him with the franchise tag. With club control beyond ’19, the Dolphins aren’t necessarily in any rush.

In a more pressing matter, the Dolphins want to hang on to right tackle Ja’Wuan James, an impending free agent. Unfortunately for Miami, things could get costly if he hits the open market.

Quality tackles are hard to come by, and Wolfe hears buzz at the combine that James could command upwards of $10MM/year. Two agents tell Wolfe that if they were representing James, they’d shoot to surpass the five-year, $47.5MM deal that Lions right tackle Rick Wagner signed two seasons ago. Beating that mark would make James the second-highest-paid right tackle in the NFL behind the Philadelphia Eagles’ Lane Johnson. The Dolphins should know more this week when they meet with James’ reps.

Set to become one of this year’s top free agents, Ja’Wuan James will have a familiar team pursuing him. The Dolphins are preparing a pitch to keep James, GM Chris Grier said (via Adam Beasley of the Miami Herald). 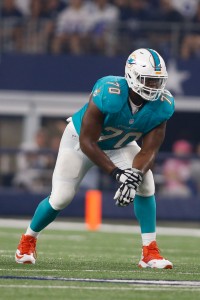 However, Grier added that Miami’s new-look front office came to Indianapolis without having discussed terms with the right tackle. Grier plans to meet with James’ representation at the Combine.

James joins Donovan Smith and Daryl Williams as the top tackles on this year’s market, which is another thin contingent. With the Buccaneers ready to keep Smith via the franchise tag if they have to, the right tackles’ stock will rise. Williams is also coming off an injury-marred season, further elevating James’ earning potential. It would seemingly stand to take a lot for the Dolphins to keep their five-year right tackle off the market.

In advance of his age-27 season, James has also battled injuries — missing eight games in 2017 and nine in 2015 — but the former first-round pick suited up for 15 contests last season. He graded as Pro Football Focus’ No. 34 overall tackle last season. Though James has not been a top-tier right tackle, he is a generally well-regarded option.

The Dolphins considered cutting James, prior to his fifth-year option vesting. They also discussed a deal to trade James to Denver for C.J. Anderson last year before nixing it. It appears Miami’s new regime will see what it will take to keep James in Miami.

Patriots offensive tackle Trent Brown will soon be hitting free agency, but the 25-year-old sounds like he’s focused on staying in New England. Brown told ESPN’s Adam Schefter that he’s seeking some “longevity” and a “great fit schematically,” and he specifically pointed to the Patriots.

“That’s definitely something I would love,” Brown said about sticking with the team (via Josh Alper of ProFootballTalk.com). “But hey, we’re going to cross that bridge when we get there.”

The six-foot-eight lineman has a solid season with the Patriots in 2018. After being acquired from the 49ers, Brown proceeded in start all 16 games for New England en route to a Super Bowl championship. Pro Football Focus was bullish on his performance, ranking him 32nd among 80 eligible linemen.

However, considering Brown’s performance, many thought the lineman may leave New England for a lucrative payday. In that scenario, the Patriots would presumably lean on 2018 first-round Isaiah Wynn, who missed his entire rookie campaign after having torn his Achilles during the preseason.

The Dolphins will have a lot of tough decisions to make this offseason, including what to do with Ryan Tannehill. Tannehill is set to have a cap hit of over $26MM in 2019, hasn’t been able to stay healthy, and hasn’t been great on the field even when he is. Deciding Tannehill’s fate “clearly tops” the list of Miami’s priorities for the offseason, according to Adam Beasley of The Miami Herald, who writes “Tannehill would need to be exceptional when he returns from his shoulder injury” for the Dolphins to bring him back at that salary next year.

Tannehill missed the end of the 2016 season with a torn ACL, then missed all of the 2017 season when he re-tore the ACL. This year, Tannehill started the first five games, then went down with a mysterious shoulder injury. He’s been sidelined for four games, and it’s not clear when he’s coming back. It’s still very early, but at this point it would be a surprise if Tannehill is brought back at his current cap number. For what it’s worth, Beasley writes that the Dolphins like Saints quarterback Teddy Bridgewater.