One of two Cardinals linebackers mentioned in trade rumors this offseason, Jordan Hicks will join Chandler Jones in being with the team when it begins its season Sunday. The Cardinals gave Hicks permission to seek a trade in May, after drafting Zaven Collins in Round 1 and anointing him the starter alongside Isaiah Simmons. But nothing materialized. GM Steve Keim said Hicks, despite his demotion, will play “a strong role” on this year’s Arizona defense, via Darren Urban of AZCardinals.com. Citing Simmons’ positional flexibility, Keim said there will be times when Simmons, Collins and Hicks line up together. The Cards have devoted considerable resources to their off-ball linebacker spots, drafting Simmons and Collins in the first round — after taking Haason Reddick in the 2017 first round and slotting him off the ball for most of his run — and signing Hicks to a four-year, $36MM deal in 2019. Hicks accepted a $3MM salary cut in March, and the 32-game Cardinal starter’s workload will certainly be reduced from the 100% and 92% defensive snap rates of the past two seasons.

The 49ers announced they have hired Ken Norton Jr. to the coaching staff. He’ll carry the title of Assistant Head Coach – Defense as well as inside linebackers coach. 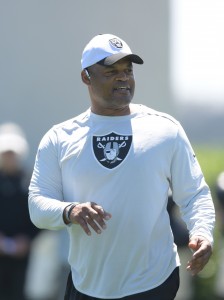 Norton was a popular figure in the Raiders’ locker room over the last three years, but poor on-field results led to his firing in November. At the time of his dismissal, the Raiders ranked 32nd in defensive DVOA. Of course, head coach Jack Del Rio was the one calling plays on defense, so it’s not necessarily fair to pin everything on Norton.

It’s a great fit for Norton on multiple levels. For one, he doesn’t have to move from his Bay Area home. The deal also marks a homecoming for Norton since he spent seven seasons with the Niners and played on three consecutive Super Bowl-winning teams.

Here’s the latest on the AFC North as we wrap up one of the final Sundays without football on the 2016 calendar.

The Browns continued to fill out their coaching staff Monday, with Hue Jackson announcing the hiring of eight coaches to work for him during his first season in Cleveland, according to a report on the team’s website.

All of which are position coaches or other assistants after the Browns announced more than two weeks ago the additions of Ray Horton, Pep Hamilton and several others.

Here’s the full list of coaches and their respective titles.

Cioffi served in the same position under Horton during his previous one-year stint as the Browns’ defensive coordinator in 2013. Cioffi’s worked with Horton in 10 of his 21 seasons.

Nunn was the Giants’ defensive line coach from 2010-15, collecting a Super Bowl ring in guiding the NASCAR package-powered team to the 2011 championship.