A common theme appears to have developed in Miami this week in the Dolphins’ search for quarterback help after Ryan Tannehill‘s injury: familiarity with coach Adam Gase. 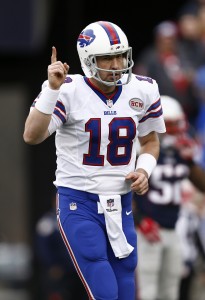 As a result, some interesting names were considered. Although it’s not certain how seriously these considerations were, Armando Salguero reports (on Twitter) at some point in the process this week former Gase Broncos charges Kyle Orton and Tim Tebow were discussed.

Salguero also confirms the Dolphins’ previously reported interest in Colin Kaepernick, adding more names were likely bandied about during this emergency process (Twitter link). He also notes (via Twitter) some of the names were discarded quickly.

While the Dolphins landed their preferred target in convincing Jay Cutler to come out of retirement, their range of candidates is obviously notable. Set to turn 30 next week, Tebow has not played a down of regular-season football since 2012 and is currently in the New York Mets’ farm system. A historically inaccurate passer, Tebow did lead the Broncos to seven wins in 2011 and a dramatic playoff triumph. Gase was coaching Denver’s quarterbacks at the time, but OC Mike McCoy adjusted the scheme dramatically to fit Tebow’s unique skill set.

Orton, 34, played in a more comparable system to what Gase used with Cutler in Chicago and with the Dolphins in 2016. The passer opened three straight seasons as the Broncos’ starter before Tebow replaced him midway through ’11, and Denver primarily used a three-wide shotgun set for the less mobile signal-caller. Orton, however, retired after the 2014 season.

5:05pm: The Cowboys have reached out to a few veteran quarterbacks, according to CBSSports.com’s Jason La Canfora (on Twitter). Dallas called reps for both Jason Campbell and Josh Johnson, among others, per La Canfora. Johnson will work out for Dallas, but Campbell will remain in his state of quasi-retirement for now.

While Dallas scopes out the market for signal callers, La Canfora (link) hears that the Saints do not plan to do the same at this time. Of course, that could change with starter Drew Brees potentially out for several games.

In related news, coach Jason Garrett says they’ll consider putting Tony Romo on IR-DTR as the week goes on, James Palmer of NFL.com tweets. Nothing is decided on that front yet, however, and the upside right now is that Romo’s tests revealed zero ligament damage. Romo fractured his clavicle on Sunday, the same injury that caused him to miss the final 10 games of the season in 2010.

No NFL division looks more in flux through two weeks than the NFC East, where the Eagles and Giants have yet to win a game, and the Cowboys will be without Tony Romo and Dez Bryant for the next several weeks. Earlier today, we asked you to weigh in with your thoughts on how the East race will play out over the next 15 weeks. Now, we’ll round up a few more Monday items from out of the division…

Patriots quarterback Tom Brady issued a Facebook statement Friday in response to Judge Richard Berman’s decision on Thursday to overturn the four-game suspension the NFL handed him for his role in DeflateGate. Here are a couple snippets from the full statement, which can be found here (courtesy of ESPN’s Josina Anderson):

“While I am pleased to be eligible to play, I am sorry our league had to endure this. I don’t think it has been good for our sport – to a large degree, we have all lost.”

“I love the NFL. It is a privilege to be a member of the NFL community and I will always try to do my best in representing my team and the league in a way that would make all members of this community proud.”

More from around the league as Saturday’s 53-man roster deadline draws closer:

After serving as the Bills’ starting quarterback for most of the 2014 season, Kyle Orton has decided to call it a career, the team announced today in a press release. Orton will retire from the NFL after spending 10 seasons in the league.

“I just have been going at it for 10 years and it’s just a family decision and I’ve decided to get home and be a dad and call it a day,” Orton said.

Orton, 32, flirted with retirement a year ago as well, and his apparent willingness to end his career at that point led to the Cowboys releasing him from his contract, at which point he inked a new deal with the Bills. In this case, he appears to be more committed to ending his career, despite the fact that he has a year remaining on his contract. By retiring, Orton will no longer be eligible to earn his $5.4MM non-guaranteed base salary for 2015, though he’ll still count for $1.5MM in dead money against the Bills’ cap.

Assuming Orton doesn’t play another NFL game, he’ll finish his career with a 42-40 record as a starter, completing 59.5% of his career passes, with 18,037 yards, 101 touchdowns, and 69 interceptions. His best stastical seasons came in 2009 and 2010 for the Broncos, when he topped 20 touchdown passes and 3,600 passing yards for the only two times in his career.

As for the Bills, they’ll likely be on the lookout for a new signal-caller this offseason, since E.J. Manuel is currently the only quarterback on the roster. Unfortunately for Buffalo, the team sent its 2015 first-round pick to Cleveland in this year’s Sammy Watkins trade, so if the team hopes to land a potential starting QB, it’ll have to be either in free agency or later in the draft.

It’s a crucial weekend in the NFL’s two East divisions, as the top two teams in both the AFC East and the NFC East will square off, with the Patriots hosting the Dolphins and the Cowboys looking to avenge their Thanksgiving loss against the Eagles. While we look forward to those two matchups and others, let’s check out the latest out of the league’s East divisions….

With the Saints‘ salary cap situation in disarray, they could look to star quarterback Drew Brees for some relief going forward. Brees is signed through 2016, so a restructuring is unlikely, writes Jason Fitzgerald of OverTheCap.com. Having a $26.4MM cap hit in 2015 puts the team in a tough spot, and based off his play this season, Fitzgerald can’t see the team justifying an extension for him (via Twitter).

What the team is most likely hoping for is a deal similar to the one Tom Brady took with the Patriots, according to Fitzgerald (via Twitter). He described the contract as an “off into the sunset” type of deal, presumably where Brees would take a lower annual salary freeing the team up to spend elsewhere.

Here are a few other notes on quarterback contracts that seem impactful:

Linebacker Jonathan Casillas was acquired by the Patriots earlier this week, and the 27-year-old is doing everything in his power to play this weekend. It isn’t easy switching teams midseason, and the six-year veteran realizes that he has a lot of catching up to do (via Lee Schechter of ESPNBoston.com):

“I feel like I’m cramming for a final in college,” Casillas said. “I’m happy to be here and blessed to have this opportunity to play for a great organization.

“This is my fourth [defensive] coordinator in four years since Gregg [Williams], so five [defensive] coordinators in five years, and that’s the tough part — learning all of these different defensive schemes — not really transitioning city to city because a city is a city. I can get acclimated to my surrounding place. My job learning the Xs and Os about what I’m going to do every day and the verbiage and the communication, that’s the difficult part.”

Casillas was also asked how he felt being traded from the last-place Buccaneers to the place-first Patriots:

“Do I really have to answer that question?”

Bills head coach Doug Marrone announced today that veteran signal-caller Kyle Orton will take over for E.J. Manuel as the team’s starting quarterback beginning this coming week (Twitter link). According to Marrone, the Bills need more production at the position and believe that Orton gives the club the best opportunity to win immediately (Twitter links).

While Manuel helped lead the Bills to a pair of wins early in the season, he has often struggled to make accurate throws to his receivers, and is completing just 58.0% of his passes. Pro Football Focus’ advanced metrics (subscription required) rank the second-year quarterback just 35th out of 37 qualified passers, ahead of only Jake Locker and Geno Smith.

Orton signed with the Bills late in the offseason to a contract that suggested the team believed he may have to start at some point. As Brian McIntyre observes (via Twitter), Orton can earn up to $6MM this season if he plays more than 50% of Buffalo’s snaps in 2014.

This will be an interesting situation to keep an eye on, on a number of levels. Orton clearly isn’t a long-term solution for the Bills at quarterback, and if Manuel isn’t either, the team may need to draft a signal-caller in 2015 to develop. However, the club dealt its 2015 first-round pick to Cleveland in the Sammy Watkins trade, so unless the Bills can somehow trade back into the first round, it’s unlikely they’ll have a shot at a future star.

Additionally, the QB change signals that the front office and coaching staff are very aware that the Bills are in win-now mode with a new ownership group taking over. If the move backfires and leads to another losing season in Buffalo, major changes could be coming in the offseason.

After Michigan’s embarrassing loss to Notre Dame on Saturday evening, Mike Florio of Pro Football Talk wondered if Michigan fans would begin to dream of 49ers‘ head coach Jim Harbaugh‘s return to Ann Arbor to coach his alma mater. We detailed Harbaugh’s contract situation last month, and as Florio writes, “with no new contract in place and no plan to try to work one out until after the season, Michigan could opt to chase Harbaugh.”

In a series of tweets, Ian Rapoport of NFL.com reports that some 49ers sources believe that Harbaugh is already losing his locker room as the club’s veterans are wondering if their coach is really “all in.” Rapoport adds that some veterans were annoyed that Harbaugh took the team to Baltimore for a few days to hold joint practices with his brother, John, head coach of the Ravens. Between those rumblings and the fact that an extension was not reached in the offseason, Rapoport wonders if this will be Jim Harbaugh’s final season in San Francisco.

Now for some more notes from around the league as the season gets underway in full force: