Five years ago today, Bills defensive tackle Marcell Dareus was handed his second suspension for violating the NFL’s substance abuse policy. The ban ruled Dareus out for the first four games of the season and marked the beginning of the end of his time in Buffalo. 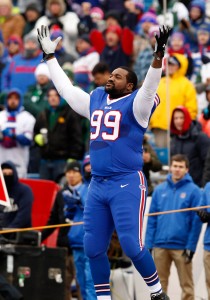 Dareus reportedly tested positive for marijuana use, which probably wasn’t a deal-breaker in and of itself. It was, however, enough to void a portion of his guarantees. It also didn’t sit well with Bills management, considering that Dareus knew the consequences of a positive test.

Roughly one year prior, the Bills furnished Dareus with a six-year, $95.1MM contract. He showed that he was worth the money in his early years, recording 28.5 sacks from the interior. That included a stellar 2014 with ten sacks – enough to match defensive end Jerry Hughes. In 2015, they asked him to play nose tackle in Rex Ryan‘s 3-4 scheme – he did a decent job of stopping the run, but he garnered just two sacks. They hoped he could build off of that in 2016. Instead, Dareus failed to keep up with his conditioning during the suspension. Between the ban and injuries, he was limited to just eight games that year.

Ryan would go on to lose his job in December of 2016. The Bills tried to send Dareus elsewhere too, but they were unable to find any takers for his contract. Finally, just before the 2017 deadline, they shipped Dareus to the Jaguars for a 2018 Day 3 draft pick. It was an unceremonious end to what could have been a longstanding and productive career in Buffalo.

Even when reunited with old pal Doug Marrone, things just weren’t the same. The Jaguars declined the final year of Dareus’ deal before the start of 2020 and he hasn’t played in the NFL ever since. Dareus is still only 31, but it’s not clear if he’ll ever return to the game.

The Seahawks waived undrafted free agent rookie cornerback Kemah Siverand earlier this week after he attempted to sneak a woman into Seattle’s team hotel, a violation of COVID-19 protocols, according to Tom Pelissero of NFL.com (Twitter link). Siverand reportedly tried to disguise the woman as a Seahawks player by having her dress in Seattle apparel, per Pelissero. While the situation could be viewed with levity in normal circumstances, Siverand’s decision — and subsequent release — reinforce how seriously NFL teams are (and should be) taking the prospect of a COVID-19 outbreak.

The Jaguars will decline Marcell Dareus‘ option, according to NFL.com’s Ian Rapoport (on Twitter). The option would have locked in roughly $20MM in salary for the defensive tackle. Instead, the Jaguars will officially turn it down before the Tuesday deadline. 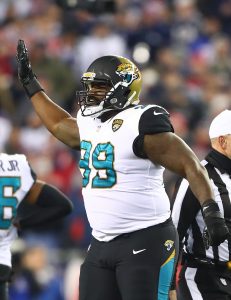 Dareus missed the bulk of the 2019 season thanks to a core muscle injury. In six games, he notched 13 tackles and half of a sack.

The news doesn’t come as a real surprise – the multiple-time Pro Bowler is coming up on his 30th birthday and the Jaguars have a number of needs to address this offseason. By moving on, they’ll clear the bulk of his would-be ~$20MM in earnings; they’ll be left with just $2.5MM in dead money.

The Jaguars acquired Dareus from the Bills midway through the 2017 season, taking on the remainder of his six-year, $95.1MM contract. At that point, Dareus had worn out his welcome with Buffalo coaches and the trade was pretty much a cap dump for Buffalo. The Jags only gave up a late-round draft pick for him.

Unless he’s brought back on a cheaper deal, Dareus will leave the Jaguars after appearing in 30 games (22 starts). Dareus might not have been worth the sizable paycheck for 2020, but that’s not to say that he didn’t deliver at times. In 2018, Dareus’ only full season with the Jaguars that wasn’t compromised by injury, his advanced metrics were roughly in line with his best work in Buffalo. If he’s healthy, he can still be a difference-maker and a quality run-stuffer for some team out there, but he’ll have to sign for something less than ~$20MM per annum.

With Dareus’ salary off of the books, the Jaguars can turn their attention to higher priorities, including a new deal for defensive end Yannick Ngakoue.

Marcell Dareus underwent core-muscle surgery earlier this week and he was expected to miss four-to-six weeks as a result. Now, it’s clear that the defensive tackle will be out longer, as the team has placed him on injured reserve.

Dareus will be eligible to return in eight weeks, which brings a probable return date of Week 15. However, if Jacksonville is out of the playoff picture by then, there may not be an incentive to active the veteran.

The Jaguars have signed Akeem Spence to take the roster spot vacated by Dareus. Spence was recently waived by the Eagles.

Marcell Dareus is currently on his way to Philadelphia to visit Dr. William Meyers to receive a second opinion on a core muscle injury that could cause the defensive tackle to miss 4-6 weeks, according to Ian Rapoport of NFL.com. Dareus has been a key cog in the Jacksonville defensive line, but has struggled with injuries throughout the year.

Dareus missed the Jaguars first game of the season with an elbow injury and the defense was scorched for 40 points, albeit by the high-flying Chiefs offense. Since returning to action in week two, Dareus seemed to provide a stabilizing presence for Jacksonville’s unit, having fared noticeably better, especially against the run.

The Jaguars originally reported that Dareus had to leave Sunday’s game against the Bengals with an abdomen injury. However, he later returned to action, quelling fear of something substantial. It seems that upon further review, the training staff has found more reason for concern.

Originally selected with the third overall pick by the Bills in the 2011 draft out of Alabama, Dareus has been a productive defensive lineman over the past eight seasons. In Buffalo, Dareus earned all-pro honors in 2014 and was selected to two pro bowls. His sustained success earned a six-year, $108m contract extension four years ago.

Buffalo, eventually felt they could utilize their salary cap better elsewhere and traded Dareus to the Jaguars in 2017 for a sixth round pick. Since joining Jacksonville, Dareus has appeared in nearly every game and started all but two games over the past two seasons. Depending on the outcome of his visit with Dr. Meyers, the organization may need to prepare to replace him for an extended period of time. 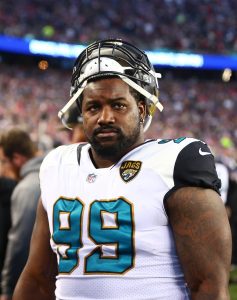 “The Jaguars are aware of a citation involving DT Marcell Dareus,” the team said (via David Smith). “The matter will be handled internally.”

According to the report, Dareus was pulled over around 2 a.m. for speeding, at which time the officer smelled marijuana coming from the vehicle. Two joints and a grinder were found following a search, and none of the passengers would say who the marijuana belonged to. Dareus was ultimately slapped with “a citation for misdemeanor marijuana possession and possession of drug paraphernalia,” and he also receiver a warning for speeding.

Dareus will naturally be investigated by the NFL, and his past run-in’s with the league will likely work against him. The 29-year-old was hit with a one-game ban in 2015 after violating the NFL’s substance-abuse policy. He was later handed a four-game suspension in 2016 for the same offense.

The two-time Pro Bowler spent the first six-plus seasons of his career with the Bills before being traded to Jacksonville in 2017. He started all 15 of his appearances last season, compiling 32 tackles, one sack, and one forced fumble. He has six tackles and 0.5 sacks in three starts this year.

The Jaguars and defensive tackle Marcell Dareus agreed to a restructuring of his contract, according to Field Yates of ESPN.com (Twitter link). The new deal will allow Dareus to remain in Jacksonville for at least one more year.

Initially, was set to make $8.335MM in base salary, but the new deal will call for a base of just $2.835MM. Instead, he’ll get a $5MM bonus up front with a revised deal that eliminates the 2021 season. The Jaguars will save $5MM against the cap and Dareus will be eligible for free agency after the 2020 season.

Dareus, 29 in March, came to the Jaguars in a midseason trade with the Bills in 2017. For a late draft pick, the Jaguars acquired Dareus and the remainder of his whopping six-year, $95.1MM contract.

Unfortunately, the former No. 3 overall pick hasn’t quite lived up to that contract. Dareus compiled ten sacks en route to a Pro Bowl nod and a First-Team All-Pro selection in 2014, but he has just 8.5 sacks over the last four seasons. Last year, Dareus had only one sack and a forced fumble, though he earned a solid 80.9 score from Pro Football Focus for his solid run defense.

On Wednesday night, we learned that Jaguars defensive tackle Marcell Dareus is being sued by a Texas woman who is accusing him of sexual assault and the transmission of an STD. In addition to that, Dareus is also being sued for a separate incident in January of 2017, Greg Auman of the Tampa Bay Times writes.

Dareus rented a mansion in Florida on the week of the college football national championship game. The defensive tackle invited the accuser to an afterparty at his place, where she alleges that he groped her against her wishes. The woman says she “blacked out” from drinking and woke up next to an unclothed Dareus. Realizing that there had been “sexual physical acts upon her person,” she left to go back to her hotel.

No criminal charges were filed after the alleged event and the accuser says that she initially kept the details of the incident private, “due to embarrassment and self-guilt.” In a court date on August 9, Dareus will move to have the lawsuit dismissed.

Regardless of how either case turns out, Dareus could be subject to NFL discipline following an investigation from the league office. The league’s conduct policy calls for a baseline six-game ban for sexual assault offenses.

Dareus, 28, came to the Jaguars in a midseason trade from the Bills. Dareus wound up playing in nine regular season games for the Jags as well as their three-game playoff run. Overall, Dareus graded out as the No. 51 ranked defensive tackle in the NFL last year, according to Pro Football Focus. It wasn’t his best season, but the Jaguars were hopeful that Dareus could get back to his old form this year. In 2014, he managed ten sacks from the interior.

An unidentified Texas woman is suing Jaguars defensive tackle Marcell Dareus, accusing him of both sexual assault and the transmission of a sexually transmitted disease, reports Chris Parenteau of News 4 Jacksonville.

The anonymous claims Dareus had sex with her after she had fallen asleep, and is now seeking $15K in damages. Thus far, it’s unclear whether any criminal suit has been brought against Dareus, but the Jacksonville defender’s attorney said his client isn’t aware of any current pending charges.

Dareus, whom the Jaguars acquired from the Bills just prior to the 2017 trade deadline, has been involved in off-field trouble before, but his violations have mostly been related to substance abuse. Legal resolution aside, Dareus could serve a league-imposed suspension based on the outcome of a sure-to-come NFL investigation. Policy standards indicate a baseline six-game suspension for a sexual assault incident, but the bans for such offenses have varied in length.

Jacksonville sent a fifth-round pick to Buffalo in exchange for the now 28-year-old Dareus, who went to play nine games for the club during the regular season and three contests during the Jaguars’ postseason run to the AFC Championship Game. $7.35MM of Dareus’ 2018 base salary is fully guaranteed, meaning he’ll collect that money whether he’s on Jacksonville’s roster or not. The same is true of that total on the Jaguars’ salary cap, although the club would realize a net savings of $2.825MM if the results of a future investigation lead to a release.