Mike Groh has found a new gig. Less than a month after getting canned as the Eagles offensive coordinator, the 48-year-old has joined the Colts coaching staff, reports SiriusXM’s Alex Marvez (via Twitter). 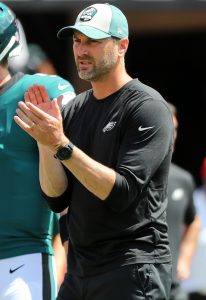 The connection with the Colts makes sense, as Groh replaced current Colts head coach (and former Philly offensive coordinator) Frank Reich in 2018. The Eagles offense was about middle-of-the-road during Groh’s two seasons at the helm, an impressive feat considering the injuries the offense has dealt with.

While Carson Wentz has mostly been healthy (besides brief injuries that led to Nick Foles and Josh McCown making their way into the lineup), the same couldn’t be said of the receivers corps. After starting six different wideouts in 2018, Groh had to turn to nine different starters in 2019. The team’s running backs have also dealt with their share of injuries, meaning the only consistent besides Wentz was tight end Zach Ertz. Despite all of this context, the Eagles still fired Groh in early January.

Groh spent a number of years at Virginia, eventually working his way up to offensive coordinator. He later moved on to Alabama and Louisville before joining the Bears as their receivers coach. He held that role for the Rams (2016) and Eagles (2017) before earning the offensive coordinator promotion in Philly.

The Eagles will promote wide receivers coach Mike Groh to offensive coordinator, according to Tim McManus of ESPN.com. 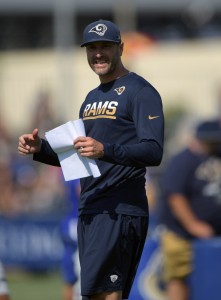 Despite reports that Philadelphia could go without an offensive coordinator for the 2018 campaign, the Eagles interviewed both Groh and incumbent running backs coach Duce Staley on Monday. Head coach Doug Pederson‘s decision to only meet with in-house candidates indicated a preference to maintain continuity for an offensive unit that ranked eighth in offensive DVOA a season ago.

Groh has much spent much of his career in the collegiate ranks, but worked with the Bears and Rams from 2013-16 before joining the Eagles in advance of the 2017 campaign. The son of former NFL head coach Al Groh, Mike Groh helped former first-round pick Nelson Agholor break out as a slot weapon last season, and also assisted veteran receiver Alshon Jeffery in a nine-touchdown Philadelphia debut.

While Pederson calls his own offensive plays in Philadelphia, Groh will presumably serve in a game-planning and play-design capacity. The Eagles needed reinforcements to their offensive coaching staff after losing both OC Frank Reich (Colts head coach) and quarterbacks coach John DeFilippo (Vikings offensive coordinator) over the past month.

Staley, for his part, will return to his role as running backs coach for a sixth consecutive season after garnering interest for at least two offensive coordinator jobs this offseason. In addition to the Eagles, the Giants reportedly considered Staley a strong candidate for their OC job under new head coach Pat Shurmur, but Philadelphia had no interest in letting Staley leave for a division rival.

Eagles May Not Hire Offensive Coordinator

Even with the departures of offensive coordinator Frank Reich and quarterbacks coach John DeFilippo, the Eagles aren’t immediately looking to bring in a new offensive coordinator, according to Ian Rapoport of NFL.com (Twitter). Rapoport points to running backs coach Duce Staley and wide receivers coach Mike Groh taking bigger roles within the team’s offense. Head coach Doug Pederson is expected to continue to work as the team’s play-caller.

It didn’t take long for the Eagles’ coaching staff to break apart following their Super Bowl LII win over the Patriots. Reich was named the Colts’ head coach Sunday after Patriots offensive coordinator Josh McDaniels backed out from the position and DeFilippo joined Mike Zimmer‘s staff with the Vikings as an offensive coordinator. Reich and DeFilippo helped orchestrate the Eagles’ playoff run with backup Nick Foles under center, including 538 total yards of offense in the Super Bowl victory. It remains to be seen whether Carson Wentz will be able to resume his role as the team’s starting quarterback to open the regular season after tearing his ACL in Week 14.

Staley has spent the last five seasons as the Eagles’ running backs coach and worked the previous two years as a special teams quality control assistant. With a backfield committee that featured LeGarrette Blount, Jay Ajayi and Corey Clement, along with Wendell Smallwood at times, the Eagles ranked third in the NFL at 132.2 yards per game on the ground last season. The team was also without Darren Sproles for most of the year, who suffered a torn ACL in Week 3.

Last year marked Groh’s first season with the Eagles following stints as a wide receivers coach for the Bears (2013-15) and Rams (2016). His father, Al, was the head coach of the Jets in 2000. Rapoport also notes that with the Eagles’ reported decision to hold off on hiring an offensive coordinator, all the offensive and defensive coordinator positions around the league look to be filled.

Other teams besides the Colts were interested in adding Patriots special teams coach Joe Judge, Mike Reiss of ESPN.com reports, but Judge and the Pats are finalizing a deal that will keep him in New England. The 36-year-old assistant will be the team’s special teams coordinator for a fourth season. The sides are ironing out minor details, but Reiss reports the deal to retain Judge is imminent, as Ian Rapoport of NFL.com reported earlier this week. Judge was a possible defection candidate if McDaniels had followed through on taking the Colts’ HC job.

Here’s the latest from the coaching circuit as we head into the offseason’s first official weekend.

This offseason’s coaching carousel is expected to be one of the more exciting ones in recent history given all of the jobs that will become available, though that excitement is not limited to the head coaching gigs. It’s been a busy morning already, but let’s take a look at a few more head coach and coordinator rumors: