After his first season with more than 1,000 yards rushing, Marlon Mack isn’t assured the starting role in the Colts‘ backfield. Head coach Frank Reich says he’ll have a leg up on second-round pick Jonathan Taylor, but he also says that fans shouldn’t get too hung up on the RB1 designation.

“There’s definitely inherent respect for the starter returning,” Reich said (via Kevin Bowen of 105.7 The Fan). “I see it as a 1-1 (punch). The way the league has gone and the way role playing has been elevated in our league, it’s made it prominent. We used to say in San Diego that when we had Danny Woodhead. He was not our starter, he was our ‘role playing’ starter. He played such a significant role. He had 80 catches in a year. You look at a guy like Nyehim Hines. We talk about Marlon and Jonathan, but what about Nyheim? He’s such a good third-down back that he’ll play a prominent (role). In some ways, (Hines) is a starter. He’s a role-playing starter.”

Right now, it seems like Mack will have to prove himself all over in camp as he gets set for his final year under contract. As it stands, he’s set to make $2.13MM in base salary before reaching the open market in March of 2021.

The Ravens have started discussing an extension for left tackle Ronnie Stanley, but Stanley himself does not seem overly concerned about the process. “I’m in no rush. I’m not really worried about it,” he said (Twitter link via Jeff Zrebiec of The Athletic). 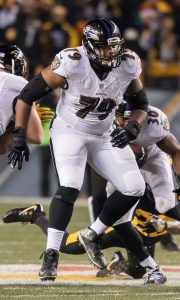 Baltimore was surely unhappy to see Texans head coach/GM Bill O’Brien hand LT Laremy Tunsil the key to the city and a three-year, $66MM extension last month. As Joel Corry of CBS Sports observes, the Ravens generally aren’t fans of short-term deals for premium players — unless that player cedes some money in exchange for the shorter term — so the fact that Tunsil got a three-year pact while also resetting the left tackle market in terms of AAV ($22MM) and full guarantees ($40MM) could make things tough for the Ravens.

That is especially true when considering that Stanley is probably the better player. Though both Stanley and Tunsil received their first Pro Bowl nods in 2019, Stanley took home First Team All-Pro honors, and he graded out as Pro Football Focus’ top pass blocker last season. The Notre Dame product is also a force in run-blocking, and his performance was instrumental in the Ravens’ offensive explosion during Lamar Jackson‘s first full year at the helm.

However, perhaps Stanley will not try to top Tunsil’s pact. While the 26-year-old of course wants to be paid what he is worth, he also said, “at the end of the day, I don’t think money is the most important thing to me” (Twitter link via Zrebiec). One way or another, Stanley will be incredibly rich in fairly short order, and perhaps resetting the market is not as meaningful as protecting Jackson’s blindside for the foreseeable future and remaining with a well-respected organization that appears to have a championship-caliber foundation.

According to Jamison Hensley of ESPN.com, though, the expectation is that Stanley’s next contract will exceed Tunsil’s. Stanley is presently slated to earn $12.8MM in 2020 under the fifth-year option of his rookie deal.

The Ravens have started discussing new deals with edge rusher Matt Judon and left tackle Ronnie Stanley, according to GM Eric DeCosta (Twitter link via ESPN.com’s Jamison Hensley). A deal with one of those players, or both, would give the Ravens some much needed breathing room against the salary cap for 2020. 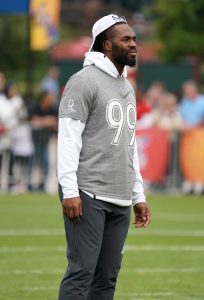 The Ravens have until the middle of July to hash out a deal with Judon, who was cuffed via the franchise tag. For now, Judon is set to play out the 2020 season at a rate of $15.8MM since he has been classified as a linebacker. However, as we’ve seen before with DE/LBs, a grievance could be coming. If Judon fights back and wins, he could be in line for roughly $17.8MM this year.

“I’d rather have a long-term deal for stability. It is what it is,” Judon said in March (Twitter link via Josina Anderson of ESPN.com). “I feel like this is what many of us go through that are facing free agency. At the end of the day, I know I’m playing football next season.”

Judon has been a key weapon for the Ravens for years. Last year, he took another giant step forward with 9.5 sacks and a total of 33 quarterback hits. The 27-year-old has 24.5 sacks over the past three seasons and lots of leverage as he discusses a new pact with Baltimore.

Stanley also has one year to go, thanks to his fifth-year option. Last year, he graded out as Pro Football Focus’ top pass blocker in the NFL. In 2020, he’s slated to earn $12.8MM.

Ravens defensive tackle Michael Pierce is doubtful to play in Monday Night’s game against the Rams with an ankle injury, according to Jeff Zrebiec of The Athletic. Peirce started Baltimore’s first nine games before going down. Veteran Domato Peko Sr. will replace Peirce in the lineup.

Also via Zrebiec, wide receiver Chris Moore, offensive tackle Ronnie Stanley, and offensive guard Ben Powers all remain questionable with injuries of their own. Stanley, who is dealing with an ankle issue of his own, is the only starter of the three, but he would be a substantial loss as the team’s starting right tackle. Moore has started one game this season and played sparingly, while Powers has yet to take the field.

Here’s more Saturday notes on the injury front around the NFL:

The Ravens have exercised the fifth-year option on starting left tackle Ronnie Stanley, a league source tells Field Yates of ESPN.com (on Twitter). With that, Stanley is now under contract through the 2020 season. 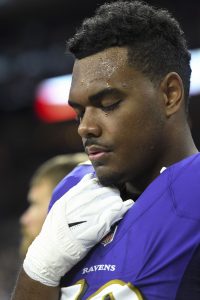 There was little doubt that the Ravens would pick up the fifth-year option on the 2016 first-round pick. Stanley has been a starter for the Ravens in all three of his NFL seasons and, last year, he graded out as the No. 17 ranked tackle in the league, according to Pro Football Focus.

The additional year will cost the Ravens $13MM in 2020 after his initial four-year deal wraps up. It’s not chump change, but it’s well worth it for the Ravens to lock down one of the best young tackles in the NFL.

The Ravens had until May 3 to make the call, but they didn’t need to take it down to the wire. Stanley’s $13MM sum will be guaranteed for injury only, so the club can easily get out of the deal if there’s an unexpected regression in his performance.

The Dolphins season has taken a dive in recent weeks. After starting the year 4-2, the team has lost control of the final AFC Wild Card spot, losing their past three games by a combined 67 points, thanks to blowout defeats at the hands of the Ravens and Panthers. However, while their reliance on Jay Cutler and midseason trade of Jay Ajayi have’t helped, Adam Beasley of the Miami Herald opines that the secondary has been one of the major reasons why the Dolphins are not in position to be playoff contenders, particularly in regards to loss of Brent Grimes when the franchise opted to cut him before the 2016 season.

Beasley explains that the front office decided to move on from the veteran cornerback because his age, salary, 2015 performance and even his wife’s antics, but in hindsight the team misses Grimes’ steady contributions. The 34 year-old corner will face his former team for the first time since they let him walk this Sunday. Since his release, the Dolphins have failed to rectify the position with the likes of Byron Maxwell, Tony Lippett, Xavien Howard and Cordrea Tankersley. While Howard and Tankersley are still young, both aren’t guys you can lean on during a playoff run. In comparison, Grimes has played more like a middle of the pack corner this season , grading out as the 60th best corner in the league, according to Pro Football Focus. Still, in Beasley’s opinion the way the team has handled their defensive back situation has been a dud all around over the past few years.

The Ravens are the latest team to lock up their first-round pick from this year’s draft, announcing today (via Twitter) that offensive tackle Ronnie Stanley has signed his rookie contract. More than half of 2016’s first-rounders are now under contract, with 17 signed and 14 still unsigned. 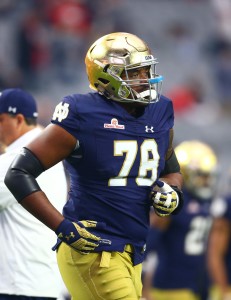 Stanley, who was the first offensive tackle off the board this year, was selected with the sixth overall pick by the Ravens. There was speculation that if a video showing Laremy Tunsil smoking marijuana out of a gas-mask bong had not been leaked just before the draft, Baltimore would have drafted the Ole Miss tackle over Stanley, but both players were very high on the team’s board, and the Ravens are happy to have a potential long-term left tackle to protect Joe Flacco‘s blind side.

According to Over the Cap’s data, Stanley will be one of six rookies who receives a four-year contract with a total value exceeding $20MM. The Notre Dame alum’s deal is set to be worth $20.484MM, with a signing bonus of about $13.098MM. Baltimore will also have a team option for Stanley’s fifth season in 2020, which the team can exercise or decline in 2019.

As our tracker shows, the Ravens have now secured nine of their 11 draftees, with only third-round edge defender Bronson Kaufusi and sixth-round QB/WR Keenan Reynolds not locked up yet.

The Dolphins slotted Laremy Tunsil as their No. 2-rated player before the draft, with Jaguars defensive back Jalen Ramsey at No. 1, Armando Salguero of the Miami Herald reports. Had Tunsil not fallen to them at No. 13, the Dolphins would have been inclined to trade back and seek cornerback help, Salguero writes.

Among corners, the Dolphins had Eli Apple rated No. 2 behind Ramsey. Although Miami traded for Byron Maxwell, the team is now without all three of its primary starters from 2015 — Brent Grimes, Brice McCain and Jamar Taylor, the latter being traded to the Browns for a seventh-round pick Saturday.

Here’s more from the AFC as we transition into a post-draft world, beginning with more on the Dolphins’ board.

Ravens GM Ozzie Newsome claims that the team preferred Ronnie Stanley over Laremy Tunsil, even before the leak of Tunsil’s now infamous video.

“The thing that I’m so proud of, . . . our scouts get a lot of information,” Newsome said, according to Jeff Zrebiec of The Baltimore Sun. “When things happen, a lot of the times we’re not surprised. We took the best player, the player that was rated the highest on the board at that point. I cannot neglect the importance of the work that our scouts do in the fall and in the spring getting information for us.”

More draft rumors from around the NFL:

League insiders believe that as many as six offensive tackles could be selected in the first round of tonight’s draft, according to Tony Pauline of WalterFootball.com. Laremy Tunsil, Ronnie Stanley, Jack Conklin, and Taylor Decker are the obvious names, but Jason Spriggs, Le’Raven Clark, and Germain Ifedi are also candidates to go off the board tonight. The clubs that have put the most research into offensive tackles, per Pauline? The Colts, Packers, Seahawks, Broncos, Panthers, and Steelers.

Let’s check out the latest draft rumors, all courtesy of Pauline: