Todd Herremans Working Out For Ravens

Free agent offensive lineman Todd Herremans is working out for the Ravens at their minicamp, reports Adam Caplan of ESPN (Twitter link). 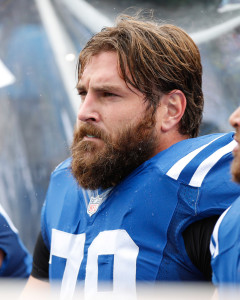 Herremans has been unemployed since the Colts released the 33-year-old last December and there hasn’t been any reported interest in him until now. Last season’s outcome wasn’t what Herremans or the Colts envisioned when the club signed him to a one-year, $2.25MM deal in March 2015. Prior to earning his release, Herremans started in just two of eight games and was inactive five times, as ESPN’s Mike Wells notes (on Twitter).

Before landing in Indy, Herremans was long a reliable lineman as a member of the Eagles, with whom he appeared in 127 games and racked up 124 starts from 2005-14. One of his coaches in Philadelphia was Juan Castillo, who’s now at the helm of the Ravens’ offensive line. If Herremans ends up in Baltimore, he’d likely serve as depth on the right side behind elite guard Marshal Yanda and tackle Rick Wagner.

In other Ravens notes, the team got good news today on second-year receiver Breshad Perriman. It was previously feared Perriman had a torn ACL, but that isn’t the case. He should be ready to go for Week 1.

It wasn’t long ago that veteran guard Todd Herremans was one of the Colts’ more notable signings of the offseason, having been expected to bring some stability to the offensive line. Nine months later, Indianapolis has released Herremans with three weeks left in the regular season, the team announced today in a press release.

Herremans, a former Eagle, signed a one-year, $2.25MM deal with the Colts in March that could be worth up to $3.5MM. However, he lost his starting job in Indianapolis after just two weeks, and was made inactive for multiple games since then. The 33-year-old, who has started 126 games during his 11-year NFL career, will become an unrestricted free agent if and when he clears waivers.

Offensive lineman don’t always make the most headlines, but when a high-profile blocker like Evan Mathis gets released everyone starts to pay attention.

Aside from fans, analysts, and general managers, the NFLPA has also taken interest in the All-Pro guard’s release, according to Tim McManus of PhillyMag.com (via Twitter). The Association is currently in the “information-gathering” phase of the process.

The NFLPA could be investigating whether the team’s decision to cut Mathis was a direct result of his absence at voluntary offseason workouts, according to Mike Florio of Pro Football Talk.

The more likely explanation for the investigation, writes Florio, that the Eagles cut him after reports that the team removed an offer to rework his contract because Howie Roseman was no longer the team’s general manager.

Here are a few more nots regarding offensive linemen in the NFC:

SUNDAY, 10:37am: The Colts have agreed to terms with free agent guard Todd Herremans, who was released by the Eagles at the end of February. The news was first reported by Kevin Bowen of Colts.com (via Twitter) and has been confirmed by a number of sources.

Herremans had been with the Eagles since the club selected him in the fourth round of the 2005 draft. Over the course of the last decade, the 10-year veteran has appeared in 127 games for the Eagles, starting 124 of them at every spot besides center on the offensive line. In recent years, Herremans had served as Philadelphia’s right guard or right tackle, though his 2014 campaign came to an early end due to a biceps injury.

As Geoff Mosher of CSNPhilly.com tweets, the signing makes sense given Herremans’ connections with Colts GM Ryan Grigson, who served as a scout for the Eagles and as Philadelphia’s director of player personnel, and given the Colts’ status as a legitimate contender.

ESPN’s Adam Caplan tweets that it is a one-year deal worth $3.5MM. Herremans will add to the team’s guard competition while also providing insurance at the tackle positions. PFR’s Luke Adams wrote that Herremans was visiting with the Colts on Friday.

As the 2015 free agent period inches a little closer, let’s check in on a few Friday mornings items from around the league’s two South divisions….

Marshawn Lynch offered fans a rare glimpse into his thought process, and it contradicts his post-Super Bowl assessment.

The Seahawks running back decided to use a Turkish television station, although CSNNE’s Phil Perry breaks down the interview, to express his stance on not receiving a goal-line carry to potentially lift Seattle to a second straight championship.

This surprising insight comes exactly a month after Lynch told ESPN’s Jim Trotter he wasn’t dismayed by not getting a carry on a play that instead resulted in Malcolm Butler‘s game-sealing interception. Currently in Turkey, Lynch also gave weight to the notion, albeit in a roundabout manner, that Pete Carroll didn’t want him to win the MVP award.

Lynch remains under contract with the Seahawks for one more season, although the mercurial runner has yet to accepted a reported extension offer, which clouds his future.