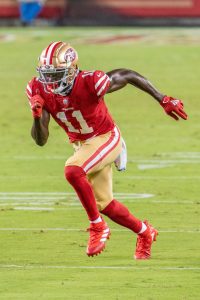 Before Tom Brady shocked the world and joined up with the Bucs, there was buzz about TB taking his talents to SF. For his part, Jimmy Garoppolo says he wasn’t caught off guard by the speculation.

“The one thing I can say about the whole situation was Kyle and John were very honest with me the whole time,” the quarterback said (via Matt Barrows of The Athletic). “That’s their job — to put the best team together possible and you’ve got to respect that. So as long as the honesty and truthfulness is there, I respect those guys, I love those guys. And it’s going to be a fun year this year.”

It was an odd spot for Jimmy G to be in, especially since he had just capped his first full season as an NFL starter with a Super Bowl appearance. Still, he says he wasn’t sweating the Brady talk.

“It’s the NFL,” he said. “There’s competition. Everyone’s trying to put the best team together they can. And that’s just the reality of it.”

Earlier this month, Trent Williams inked his revised deal with the 49ers. Williams agreed to table his previous demand for an extension in exchange for some current year perks, including a ~50% guarantee on his remaining salary. Also, as part of the reworked contract, the Niners waived their right to franchise tag the left tackle next year, according to Field Yates of ESPN.com (on Twitter). 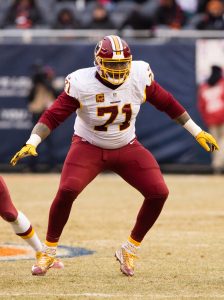 Even though Williams is set for unrestricted free agency next year, the two sides remain aligned on the goal of a multi-year deal, Yates hears. It’s not quite clear what that would cost for the 49ers. At one point in time, Williams was rumored to be seeking something around $20MM annually, though Williams’ agent Vince Taylor has denied those claims in March. However, the rep indicated that something in the neighborhood of $16MM would work for his client.

“If we could get to a point where we could talk about those numbers, that would not be a holdup for us,” Taylor said, back when Williams was in D.C.. “The contract has never been the holdup. The Redskins prior to the Combine put Trent on the trade market. They had him on [the trade block] maybe 10 days, and even through the Combine, which is the biggest business platform for teams looking to wheel and deal.”

Ultimately, Williams’ willingness to compromise with the 49ers proved that his contract wasn’t his top priority. The soon-to-be 32-year-old probably could have secured a long-term extension somewhere in the league. Instead, he agreed to join the Niners as he pursues a Super Bowl ring.

Williams, graded out as Pro Football Focus’ best tackle in the NFL in 2016. Since then, he’s missed a total of 29 possible games.

The 49ers have guaranteed half of Trent Williams‘ salary for the 2020 season, according to Ian Rapoport of NFL.com (on Twitter). The two sides agreed to rework his deal earlier in the offseason, but the terms were now previously known. On Friday, Williams formally inked the deal and passed his physical, making it all officially official. 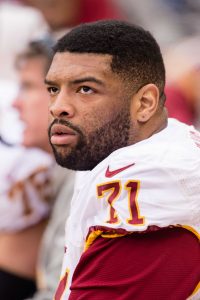 As Williams demanded a trade, he also demanded a new deal from whatever team acquired him. But, when the 49ers got serious with the Redskins, Williams had a change of heart. The deal went down towards the tail end of draft weekend and was not accompanied by a multi-year extension.

After Williams put his extension request on the back burner, the 49ers locked in 50% of his $12.5MM in base salary. Before, that sum was completely non-guaranteed.

The multiple-time Pro Bowler will take over for SF legend Joe Staley, who kept his retirement plans on the hush until the Niners landed Williams to replace him. Now, he’ll look to get back to his old form, secure another big pay day, and play for a championship in SF.

Williams, 32 in July, ggraded out as Pro Football Focus’ best tackle in the NFL in 2016. He’s missed a combined 29 games over the past four seasons, but he still profiles as one of the league’s most talented and accomplished linemen.