Running back Zac Stacy is done with football. On Thursday afternoon, Stacy announced his retirement via Instagram: 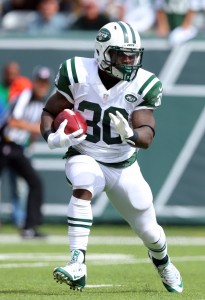 “[I] would like to take this time to show appreciation to all those who have supported [me] and were involved throughout my career. The game of football was more than a game to me. It was a life changer…I am forever blessed and grateful for my many former coaches and teammates throughout the years, the resources and relationships that I’ve built playing this game…and the numerous opportunities that I received on Fridays, Saturdays, and Sundays (and the occasional Monday night) to do what I love to do, and that’s to play the game of football.”

Stacy entered the league as a fifth-round pick of the Rams in 2013. As a rookie, he showed great promise as he gained 973 yards on the ground. In his follow-up campaign, he amassed just 293 yards rushing. After two years with the Rams, he landed with the Jets and saw his career 3.9 yards-per-carry average plummet to 2.9 yards per attempt. In July of 2016, he was cut by the Jets and we didn’t hear much about him after that. Now, he’s moving on to the next chapter.

The Jets are expected to waive running back Zac Stacy with a failed physical designation, a source tells Adam Caplan of ESPN.com (on Twitter). The tailback had left ankle surgery last November and apparently he has not fully recovered.

[RELATED: Click Here For A Complete Look At The Jets’ Depth Chart]

On Wednesday morning, the Jets signed running back Bernard Pierce and it appears that Pierce was brought in to replace the outgoing Stacy.

The Jets acquired the 24-year-old Stacy from the Rams during the 2015 draft, but the power back wasn’t able to come out of the slide that he has experience after his strong rookie season. Playing behind Chris Ivory and Bilal Powell, Stacy rushed for just 89 yards on 31 carries in his eight games for the Jets last year.

The former fifth-round pick in the 2013 draft gained 973 yards for the Rams as a rookie. In his follow-up campaign, he amassed just 293 yards. His yards-per-carry figure of 3.9 in both of his St. Louis slates plummeted to 2.9 as a Jet.

Zac Stacy‘s initial season with the Jets will end after just eight games, with the team placing the backup running back on injured reserve, Manish Mehta of the New York Daily News reports (on Twitter).

The Jets acquired the 24-year-old Stacy from the Rams during the draft, but the third-year power back didn’t shake his descent that’s transpired since his strong rookie season. Playing behind Chris Ivory and Bilal Powell, Stacy rushed for just 89 yards on 31 carries in eight games for the Jets.

With Bilal Powell sidelined in recent weeks, Zac Stacy has seen a little more action in the Jets‘ backfield as a backup to Chris Ivory, and even got a chance to act as the team’s kick returner on Thursday night. However, those kick-return duties resulted in an injury for Stacy, who fractured his ankle, according to head coach Todd Bowles (Twitter link via Brian Costello of the New York Post).

While Stacy has yet to officially land on injured reserve, the injury figures to end his season. Powell is expected to return from his own ankle injury soon, so the team may not need to another running back to its roster, with Powell and Stevan Ridley available to back up Ivory.

As we wait to see what roster move the Jets make in the wake of Stacy’s injury, let’s round up a few more notes from around the AFC East….

It’s Saturday morning, and that means ESPN.com’s NFL writers are opening their mailbags and answering questions from readers. Let’s start the day with some notes from the AFC…

The NFL’s owners typically don’t meet in August, but Ian Rapoport of NFL.com reports that the owners have scheduled an extra meeting this year to discuss the prospect of relocation to Los Angeles. Per Rapoport, the additional owners meeting will take place on August 11 in Chicago.

The purpose of the August meeting isn’t to make any major decisions, according to Rapoport, who indicates no major news is expected to come out of the session. But the NFL believes there needs to be some sort of update between May’s and October’s meetings, particularly to focus on the progress of stadium plans in the St. Louis, San Diego, and Oakland markets.

Let’s round up a few more odds and ends from around the league….

The Rams have traded running back Zac Stacy to the Jets in exchange for their seventh-round pick (No. 224), reports Adam Schefter of ESPN (via Twitter).

Stacy requested a trade after the Rams selected Todd Gurley with the 10th-overall pick in the first round of the draft, as he became part of a crowded backfield that already featured Tre Mason and Benny Cunningham.

The Jets were already rumored to be interested in dealing for Stacy, and that came true with this move. The Rams used the pick to select Baylor linebacker Bryce Hager.

Stacy might not be happy with his new situation either, as he moves from one crowded backfield for another. The Jets already have Chris Ivory, Stevan Ridley, and Bilal Powell, and Stacy will have his work cut out for him fighting for carries in that offense.

The Jets have already made a number of splashes this offseason, but it looks like the front office is not done. According to Brian Costello of the New York Post (on Twitter), the Jets are one of “several teams” to have spoken to the Rams about running back Zac Stacy. Manish Mehta of the New York Daily News clarifies (on Twitter) that the Jets discussions with the Rams did not include a formal offer. Stacy, of course, recently requested a trade following the Rams’ first-round selection of running back Todd Gurley.

The Jets already added one running back this offseason, signing former Patriots rusher Stevan Ridley. The team also has Bilal Powell and Chris Ivory under contract, but the Jets may be intrigued by the youth and potential of the 24-year-old Stacy.

The former fifth-rounder had a disappointing season in 2014, running for 293 yards and a touchdown on 76 carries. This was a far cry from his 2013 performance, when he rushed for 973 yards and seven touchdowns as a rookie. As our own Luke Adams previously pointed out, Stacy’s contract makes him a valuable trade asset. The running back is set to earn $585K in 2015 and $675K in 2016, and the Rams would be left with only $88K in dead money if they decided to move him.

Some assorted, non-prospect related notes from around the NFL…