Let’s take a quick spin on the NFL’s coaching carousel:

We learned yesterday that at least a few GMs are concerned about how much Vikings running back Adrian Peterson has left and whether or not he’d be willing to accept a contract commensurate with a running back on the downside of his career. The Giants are one team that Peterson has indicated he would like to play for if he does not remain in Minnesota, but as Paul Schwartz of the New York Post writes, Big Blue has expressed no interest in acquiring the former league MVP (although the Giants have not indicated that they are uninterested either, Peterson just does not appear to fit from a schematic standpoint). Of course, the more teams that drop out of the Peterson race, or decline to enter the race at all, the more likely it is that he will stay with the Vikings on a lesser salary.

Now for more notes from the league’s north divisions:

Sean McVay becoming the first 30-year-old ever hired to coach an NFL team will come with the expected responsibility of calling plays. The new Rams coach will take on that task presumably since he made himself an attractive candidate by doing so in Washington.

“There is not a chance I would let anyone call the plays, at least at first,” McVay told Peter King of TheMMQB.com. “It’s something I really want to do and feel comfortable doing.”

King described the Redskins’ setup as McVay calling the plays but Jay Gruden having final say over the game plan. In Los Angeles, McVay will take on both responsibilities for an offense coming off a season during which it averaged just 262.7 yards per game — more than 40 fewer than every other team. The McVay-led Washington attack finished third at 403.4 per game.

Shortly after word broke that Bills assistant head coach Anthony Lynn was withdrawing his name from consideration for the 49ers’ offensive coordinator position, San Francisco has apparently found its man for the job. According to Adam Schefter of ESPN.com (via Twitter), the Niners are hiring Lions running backs coach Curtis Modkins to be their offensive coordinator. 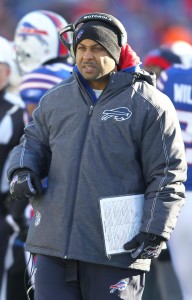 With Lynn no longer in the running for the job, Modkins and former Eagles quarterbacks coach Ryan Day were the only two known candidates for Chip Kelly and the Niners. According to Adam Caplan of ESPN.com (via Twitter), Day is now set to become the new quarterbacks coach in San Francisco.

While Day has worked with Kelly previously, Modkins and the new 49ers head coach don’t appear to have overlapped at all during their coaching careers. Before becoming the Lions’ running backs coach in 2013, Modkins served as the Bills’ offensive coordinator and running backs coach. He also worked for the Cardinals and Chiefs as their respective running backs coaches after making the leap from the NCAA ranks in 2008.

Colin Kaepernick and Blaine Gabbert each made eight starts for the 49ers in 2015, and the team’s offense struggled to get much going under either quarterback. For the season, San Francisco finished 31st in the NFL with just 303.8 yards per game. The running game, with ranked 21st, was slightly more effective than the passing game (29th), but it wasn’t a productive year for Geep Chryst‘s unit. Chryst was let go by the team earlier this week.

In San Francisco, Kelly will continue to call offensive plays, as he did in Philadelphia, while Modkins and his staff will “set [the] stage” during those game-day play calls during the week, tweets Cam Inman of the Bay Area News Group.

In addition to bringing in a new offensive coordinator, Kelly and the 49ers are also set to name a new special teams coordinator, according to Matt Barrows of the Sacramento Bee, who reports that Derius Swinton is expected to take over the role. Swinton has been a part of John Fox‘s staffs for the last few years, serving as a special teams assistant in Denver before joining the Bears last year as Chicago’s assistant special teams coach.