The Chiefs waived defensive end Jarvis Jenkins on Friday morning. The move created room for the newly-acquired Kelvin Benjamin, who is set to make his Chiefs debut on Sunday against the Ravens. 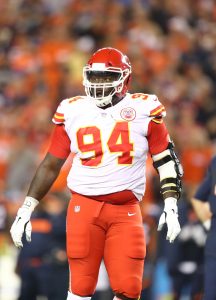 Jenkins was a hot commodity after he notched four sacks in the 2015 season. He didn’t live up to his two-year, $7MM contract with $3MM guaranteed, but he found a role with the Chiefs after Gang Green let him go in November of 2016. Over the last two years and change, Jenkins has appeared in 30 games for the Chiefs, compiling 20 tackles.

Jenkins will be subject to the waiver wire since the trade deadline has passed. If no one picks him up in the next 24 hours, he’ll be free to sign with any club.

Veteran defensive lineman Jarvis Jenkins has signed a deal to remain with the Chiefs, per his agency, SportsTrust (on Twitter). The terms of Jenkins’ deal have yet to be reported. 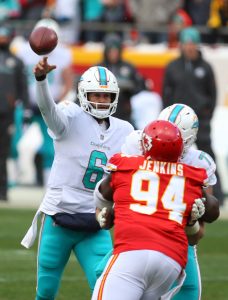 Jenkins, 29, is back with the Chiefs after signing a one-year deal with them last offseason. He appeared in 11 games last season — making one start — and had a sack to go with 11 tackles. Pro Football Focus graded Jenkins as a bottom-30 interior defender among 121 qualifiers.

The Chiefs have re-signed defensive lineman Jarvis Jenkins, according to his agents at SportsTrust (Twitter link). It’s a one-year deal, tweets Ian Rapoport of NFL.com. 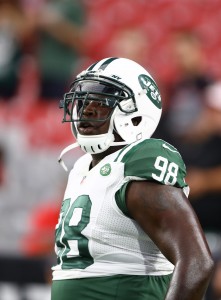 Jenkins, 28, signed a two-year, $6MM deal that contained $3MM guaranteed with the Jets last spring, but he was waived in early November after appearing in only nine games with the club. Because he was cut before Week 10, Jenkins didn’t factor into the compensatory pick formula, and therefore allowed Gang Green to land a third-round comp pick to account for the loss of defensive tackle Damon Harrison.

After working out for the Patriots, Jenkins quickly landed a deal with the Chiefs, with whom he spent the rest of the 2016 campaign. On 132 defensive snaps, Jenkins posted five tackles and put up a half-sack in Kansas City’s postseason game against the Steelers. On the season, Jenkins graded as the league’s No. 67 interior defender, per Pro Football Focus, which handed better marks for his run defense than his play against the pass.

Now back with the Chiefs for another season, Jenkins will continue to serve as a reserve on a defensive line that also includes Jaye Howard, Chris Jones, Bennie Logan, Rakeem Nunez-Roches, and Allen Bailey.

Jarvis Jenkins is signing with the Chiefs, as Ian Rapoport of NFL.com tweets. The veteran was let go by the Jets late last week.

After notching four sacks last season, Jenkins parlayed his success into a two-year, $6MM deal with the Jets. Unfortunately, he could not recreate that performance in green. Jenkins was not the super sub the Jets were hoping for at defensive end and he was handed his walking papers on Friday. Soon after, he auditioned for the Patriots, but he did not leave New England with a deal.

Pro Football Focus’ numbers indicated that Jenkins was a roughly average interior defender last year. So far this year, his disappointing play has backed up those advanced metrics and then some. He’ll look to do a 180 in KC as he joins Kendall Reyes, Dadi Nicolas, and David King behind starters Jaye Howard and Chris Jones. It’s worth noting that Howard was out of action this past weekend and it’s not immediately clear whether he’ll be ready for Week 11. 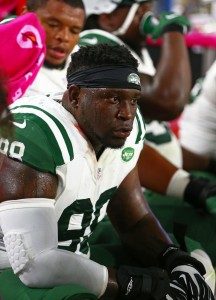 Ryan Clady‘s season is over. The Jets announced that Clady is being placed on injured reserve with what is believed to be a torn rotator cuff. Also, defensive lineman Jarvis Jenkins has been waived and wide receiver Devin Smith has been activated from the PUP list. The Jets also confirmed that they have signed defensive lineman Anthony Johnson from the Patriots’ practice squad. 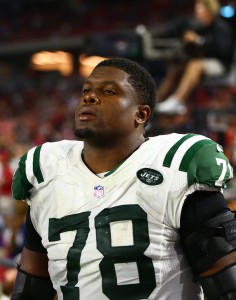 The Jets landed Clady in an April trade with the Broncos. Clady was due to earn $19.5MM between 2016 and 2017 on his old contract, but he agreed to rework his deal in order to start fresh on the east coast. His new deal still covers 2017, but it’s unlikely that the Jets will retain him with a ~$10MM cap charge.

Gang Green dealt for Clady with the hope that he could stay healthy and achieve his potential. That obviously didn’t happen as Pro Football Focus ranked Clady as the No. 54 tackle in the NFL out of 74 qualified players. Clady had middle-of-the-pack run blocking scores this year coupled with dreadful evaluations on his pass blocking. The Jets’ tackle woes went far beyond Clady too as Brent Qvale has fared only slightly better and Ben Ijalana has actually done worse. Ijalana now projects to take over on the left side.

The Jets signed Jenkins to a two-year deal this past offseason worth $6MM with $3MM guaranteed. After registering a career-best four sacks in 2015 with Chicago, it’s conceivable that he could circle back to the Bears. There’s no way around it: Jenkins’ deal was a terrible miscalculation by GM Mike Maccagnan & Co. The advanced metrics indicated that Jenkins was not far above replacement level as an interior defender last year but the Jets and other clubs were likely blinded by his traditional stats.

Smith, a 2015 second-round pick, has now recovered from his torn ACL. In ten games last year, Smith posted nine receptions for 115 yards and one touchdown.

Vic Tafur of The San Francisco Chronicle (on Twitter) expects the Raiders to get a deal done with free agent safety Reggie Nelson, who is in Oakland tonight to meet with team brass and will continue his visit with the team on Tuesday. After Nelson is wined and dined and briefed on the team’s plans for him, Tafur is expecting the Raiders to ink the veteran defender, who stands as one of the best available free agents still on the board.

MARCH 30, 12:06pm: The Jets have finally made the Jenkins signing official, announcing the move today in a press release.

MARCH 16, 10:52am: The Jets and Jenkins have now officially agreed to terms, per agency SportsTrust Advisors (Twitter link). Mehta tweets that it’s a two-year, $7MM contract with $3MM guaranteed for the defensive lineman.

MARCH 11, 5:04pm: While the Jets and Jenkins haven’t officially agreed to terms, there’s an expectation that the two sides will eventually work out a deal, tweets Mehta. 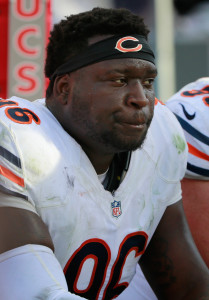 4:48pm: Jenkins and the Jets do not yet have an agreement, Kimberley Martin of Newsday reports (on Twitter). Jenkins told friends, per Mehta (on Twitter) he was working on a deal with the Jets, but he will head back to Atlanta, where he’s a resident, for now with no deal in place.

4:31pm: The Jets appear to be adding to their top-notch defensive end group by signing Jarvis Jenkins, Manish Mehta of the New York Daily News tweets.

Jenkins, who missed his rookie season with a torn ACL, signed with the Bears last year but didn’t fare well in the mind of Pro Football Focus, which rated him as its No. 104 interior defender last season. Jenkins did, however, record a career-best four sacks in 2015.