Less than a week after agreeing to terms with Jeremy Hill, the Raiders are moving on. They are releasing the former Bengals starting running back, Vic Tafur of The Athletic tweets.

Hill has not played in a game since Week 1 of the 2018 season. The Raiders’ running back room will return to its previous setup. This move also comes shortly after the team removed offseason addition Devontae Booker from its reserve/COVID-19 list.

The Raiders’ backfield depth chart consists of Josh Jacobs, Jalen Richard, Rod Smith and Booker. Hill may well have been insurance in case Booker was sidelined for an extensive period. As a vested veteran, Hill will not have to pass through waivers.

A former Bengals second-round pick, Hill signed with the Patriots after an injury-marred 2017 season. He suffered an ACL tear in Week 1 of the 2018 slate and was out of football last season.

While Hill is still just 27, he is running out of chances. The LSU product worked out for the Lions and Titans last season but went unsigned. Hill amassed 29 touchdowns in his first three seasons and eclipsed 1,100 rushing yards as a rookie. He has not, however, cleared 4.0 yards per carry since his 2014 debut campaign.

3:49pm: This deal looks like it will come together. The Raiders indeed plan to sign Hill, Ian Rapoport of NFL.com tweets, though an agreement will be contingent on the former second-round pick passing a physical and a COVID-19 test.

3:40pm: The Raiders are looking to add to their running back group. They are hosting Jeremy Hill on a visit Friday, Field Yates of ESPN.com tweets.

Hill, who has not played since the 2018 season, last popped up on the radar when he visited the Titans in November 2019. Under the current pandemic-reshaped landscape, teams are only allowed to bring in players for visits if they are seriously considering signing them. Hill may have a chance to continue his career in Las Vegas.

The former Bengals and Patriots running back would join a Raiders group that houses Josh Jacobs, Jalen Richard, Rod Smith and Devontae Booker. The latter, however, resides on Las Vegas’ reserve/COVID-19 list. The Raiders placed Booker, a 2020 addition, on the list Thursday.

Still just 27, Hill is attempting to come back after suffering another serious injury. He suffered an ACL tear in Week 1 of the 2018 season. His 2017 season in Cincinnati ended in an IR stay due to an ankle malady.

The LSU product rushed for a career-high 1,124 yards as a rookie in 2014 and scored a career-best 12 touchdowns in 2015. He rushed for nine TDs in 2016. Since, Hill has not delivered much in the way of notable work. He played in only seven 2017 games, after Joe Mixon‘s Cincinnati arrival, and has not averaged more than four yards per carry in a season since his rookie year. But the Raiders are planning to offer the veteran another chance despite a near-two-year hiatus.

The Titans recently worked out running back Jeremy Hill, according to Aaron Wilson of the Houston Chronicle (Twitter link). While Hill’s audition reportedly went “very well,” Wilson says Tennessee will not be signing Hill at this time.

Hill was Cincinnati’s nominal starter in 2017 even after the club used a second-round pick on Joe Mixon, but Hill went down with a ankle injury in November and was subsequently placed on injured reserve. He inked a one-year, $1.5MM deal with New England prior to the 2018 campaign and was listed as the team’s third running back, but his season ended after he tore his ACL in Week 1.

Tennessee doesn’t necessarily need help at running back — Derrick Henry and Dion Lewis are more than capable of handling the load, so Hill’s audition was probably more about updating the Titans’ emergency list. Hill also worked out for the Lions this year.

The Lions made a backfield swap this week, adding Tra Carson and jettisoning Paul Perkins. They may not be done looking at options.

Jeremy Hill worked out for the Lions, according to ESPN.com’s Field Yates (on Twitter). This is Hill’s first known workout since a torn ACL ended his 2018 after one game. The former Bengals back categorized himself as close to returning as of July, and he’s now ready to audition for teams.

The former second-round pick latched on with the Patriots on a one-year deal in 2018. But the knee injury scuttled his chances of contributing to last season’s Super Bowl champions.

Hill has struggled with multiple injuries over the past two seasons. Set to 27 this weekend, Hill does have three seasons in which he cleared 790 rushing yards. They came from 2014-16, with 2014 being the only time he surpassed 4.0 yards per carry.

Kerryon Johnson, Ty Johnson, J.D. McKissic and Carson reside on the Lions’ roster. It’s possible the Lions opted for a Carson waiver claim over Hill, but other teams may soon inquire about the five-year veteran.

Running back Jeremy Cox also showed his stuff for Detroit on Friday, as Howard Balzer tweets.

Free agent running back Jeremy Hill barely logged any time with the Patriots before going down with a torn ACL in Week 1 of the 2018 season, but he says he’s nearly ready to return to the field. 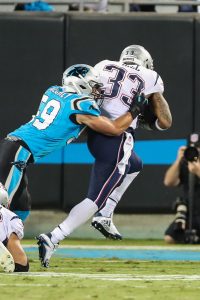 “I think for me coming off a big ACL injury, I’m just doing what I can to get back to 100%,” Hill said, per Herbie Teope of the Advocate. “I know there’s going to be a job waiting on me when I get cleared, so that’s all I’m doing now. I’m just trying to get healthy and once that happens, I’ll be back. I’m pretty close. I’m about eight months out of surgery, so hopefully soon.”

Hill was Cincinnati’s nominal starter in 2017 even after the club used a second-round pick on Joe Mixon, but Hill went down with a ankle injury in November and was subsequently placed on injured reserve. He inked a one-year, $1.5MM deal with New England and was listed as the team’s third running back, but the aforementioned ACL injury ended his season.

Cowboys linebacker Sean Lee aggravated his hamstring injury in Monday night’s game against the Titans and will be sidelined for “a little bit,” head coach Jason Garrett told reporters, including Jon Machota of the Dallas Morning News (Twitter link). Lee, of course, has had problems staying healthy throughout his lengthy career, as he’s never played a full 16-game slate and just recently missed Weeks 4-6. While Dallas’ defense has historically posted vastly inferior production without Lee on the field, those splits have become less stark thanks to the excellent play of fellow Cowboys linebackers Jaylon Smith and Leighton Vander Esch.

Jeremy Hill‘s hopes at rebounding and establishing himself with the Patriots this season endured a crushing blow in Week 1.

The fifth-year running back suffered a torn ACL during New England’s win over Houston, Ian Rapoport of NFL.com reports (on Twitter). Hill will miss the rest of the season.

A sequence involving Hill trying to make a tackle after a Rob Gronkowski fumble resulted in the injury that will end the former second-round pick’s season. Hill was down for several minutes after the play. Prior to that sequence, however, Hill played well. He gained 25 rushing yards on four carries and caught a pass. His highlight of his ultimately brief 2018 season was blocking a punt in the Pats’ 27-20 win.

Hill signed with the Patriots after his stock trended down as his Bengals run concluded. He received just 37 carries last season and played in just seven games, an injury bringing an early end to his Cincinnati game work. The former 1,100-yard rusher was a full-time player during his previous three seasons with the Bengals.

He signed a one-year deal with the Patriots and will end up collecting his $1MM salary, per Ben Volin of the Boston Globe, who adds that Hill had $281K tied up in additional per-game roster bonuses (Twitter link).

The Patriots’ running back corps has seen some eventful happenings in 2018. Dion Lewis, Mike Gillislee and Brandon Bolden are no longer part of the equation, and Sony Michel suffered an injury that wiped out most of his training camp. The Patriots released Gillislee after Hill had beaten him out for the team’s big-back role during the preseason, leading Gillislee to the Saints. James White and Rex Burkhead remain healthy, however, and will continue to be counted on as reliable cogs in this evolving committee.

Yates reported on Thursday the team was set to meet with the running back on Friday and the two sides quickly agreed to a deal.

A second-round pick in 2014, Hill burst on the scene with 1,124 yards and nine rushing touchdowns as a rookie. The following season, the LSU product tied for the league lead with 11 rushing scores. After another solid season in 2016, Hill was phased out after the team drafted Oklahoma running back Joe Mixon in the second round. Hill recorded just 116 yards on 37 carries.

Despite the departure of Dion Lewis to the Titans, the Patriots’ depth chart at running back is still chock full. Earlier in the week, the team re-signed Rex Burkhead, and it already has pass catcher James White and Mike Gillislee under contract.

Hill has served in a two-headed rushing attack since entering the league, splitting carries with Giovani Bernard in his first three seasons as well as Mixon in 2017.