In the summer of 2011, the Ravens released Willis McGahee in an effort to save cap space. Days later, the Broncos scooped him up to provide to starter Knowshon Moreno. It proved to be a wise decision, as Moreno went down with an injury in the very first game of the season. 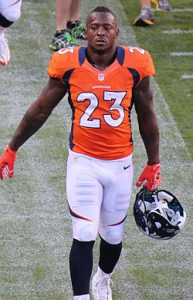 From there, McGahee took off. He topped 100 rushing yards in the team’s Week 2 win against the Bengals, torched the Packers for 103 yards off of just 15 carries in Week 4, and nearly set a new career high with 163 rushing yards against the Raiders in November. McGahee finished out the year with 1,199 rushing yards with an average of 4.8 yards per tote.

With that, the Broncos seemingly had their new No. 1 running back in 2012, the year of Peyton Manning‘s arrival. Unfortunately, things did not go according to plan for McGahee. After a solid first half to the season, a helmet-to-knee hit from Quentin Jammer in November resulted in a torn MCL and an early end to his campaign.

From there, Moreno regained his spot as the team’s top RB and, on this date in 2013, McGahee was released by the Broncos. Sadly, McGahee was unable to return to his old form after the release. McGahee hooked on with the Browns after they traded Trent Richardson to the Colts, but he averaged just 2.7 yards per carry and ran for 377 yards in his 12 games, both career lows. After that, it was curtains for the former first-round pick and University of Miami star.

McGahee had an up-and-down career in the NFL, but he left the game with two Pro Bowl selections and four seasons with upwards of 1,100 rushing yards.

The latest out of the West divisions…

Until rosters are cut down to 53 players, teams are required to be under the $133MM salary cap with their top 51 salaries. In the wake of an aggressive offseason which included signing big-ticket free agents Aqib Talib, T.J. Ward, DeMarcus Ware and Emmanuel Sanders, the Broncos’ top 51 costs $132MM, meaning John Elway and Co. have some bookkeeping to do between now and the end of training camp, explains ESPN’s Jeff Legwold.