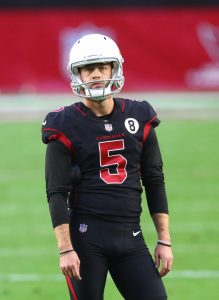 The Panthers have made their decision. Carolina is cutting kicker Ryan Santoso after just one game, a source told Joe Person of The Athletic (Twitter link). The team then announced they would be signing kicker Zane Gonzalez off the Lions’ practice squad to replace him. 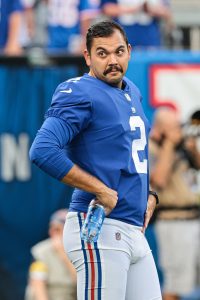 It was a move that was time sensitive because of the Panthers’ trade for Santoso a few weeks ago. Carolina agreed to acquire Santoso from the Giants, and the deal stipulated that they’d send a seventh-round pick to New York if Santoso was on the active roster for two games. Essentially, they had a one week free trial on the kicker, and decided he wasn’t worth the late-round pick.

Santoso made both of his field goal attempts in the team’s Week 1 win over the Jets, but he did miss one of his two extra point attempts. The Panthers cut Joey Slye at final cuts, and they also have Dominik Eberle on the practice squad. Gonzalez was the Browns’ kicker in all 16 games in 2017, and he spent most of the past two seasons as the Cardinals’ full-time kicker. Because he was signed off another team’s practice squad, Carolina will need to keep him on the active roster for at least three weeks.

The Giants will now get nothing in return for the man they had behind Graham Gano during the preseason. Teams apparently thought highly enough of Santoso, who has spent some time in the CFL, to warrant a trade for him, so it wouldn’t be surprising if he gets another shot with somebody soon.

After losing longtime kicker Matt Prater to the Cardinals in free agency, the Lions have added Arizona’s previous kicker. Zane Gonzalez agreed to a one-year deal with the Lions on Tuesday, according to his agency (Twitter link).

Detroit used Prater as its kicker from 2014-20, but he left for Arizona in March. The Lions signed former Bengals specialist Randy Bullock, but they have now added some veteran competition.

Gonzalez, 26, kicked for the Cardinals from 2018-20, catching on in the desert after the Browns cut him early in the 2018 season. The former seventh-round Browns pick fared well in 2019, making more than 86% of his field goal tries. Last season, Gonzalez was less effective (73%) and played a role in the Cards’ late-season swoon. He missed a 45-yard field goal in a three-point loss to the Patriots and saw another game-tying try — a 49-yarder — fall short of the uprights in a three-point loss to the Dolphins.

Bullock, 31, is a nine-year veteran who spent the past four years as the Bengals’ kicker. To make room for Gonzalez on their roster, the Lions are waiving kicker Matthew Wright, per NFL.com’s Tom Pelissero (on Twitter).

Mike Nugent looks set to continue as Arizona’s kicker for the foreseeable future. The Cardinals placed Zane Gonzalez on IR on Saturday and promoted Nugent from their practice squad.

The Cardinals gave Nugent a chance to kick in a 16th NFL season last week, calling on him to replace an injured Gonzalez. With Saturday’s transaction sidelining Gonzalez for the rest of the regular season, the 38-year-old Nugent will receive more opportunities to help the Cards into the playoffs for the first time in five years.

Gonzalez has struggled this season, having seen a game-tying field goal from inside 50 yards fall short against the Dolphins and having missed five other field goals (16-for-22) in his third Cardinals campaign. The former Browns kicker, down because of a back injury, will be eligible to return for Arizona’s playoff game — should the Cards qualify. Nugent made 4 of 4 field goals in the Cards’ win over the Giants last week.

Joining Gonzalez on IR for the next three weeks: Jordan Phillips. The pricey free agent acquisition will head to IR for the second time this season. Because this is Phillips’ second time on IR, his season is over.

Phillips has dealt with a balky hamstring this season. He returned from IR last week to play against the Giants, but a setback will sideline a key Cards defender for the team’s most critical stretch of games in years. The Cardinals now have D-linemen Phillips, Corey Peters and Josh Mauro on IR.

Zane Gonzalez might be hearing footsteps. Or, perhaps, he just has some backup. On Friday, the Cardinals signed veteran kicker Mike Nugent to the practice squad, per a club announcement.

Nugent first made his Cardinals debut over a decade ago in 2009, appearing in a pair of games. Now 38, he owns a career 81% field goal completion rate across 168 games. Last year, he had a cup of coffee with the Patriots as a part of their revolving door of kickers. The veteran converted five of eight FGs with the Pats, who released him after a pair of missed field goals against the Browns. The Patriots won that October contest to advance to 8-0, but Bill Belichick wasn’t taking any chances.

Gonzalez, meanwhile, missed two of his three field goal tries in the season opener. Still, the one he converted on was from 56 yards out, and head coach Kliff Kingsbury says he’s “very comfortable” with the 25-year-old.

After topping the Niners in Week 1, the Cardinals will look to go 2-0 this Sunday against the Washington Football Team.