Some would say that RGIII is coming to Cleveland with baggage, but new Browns coach Hue Jackson wouldn’t agree. 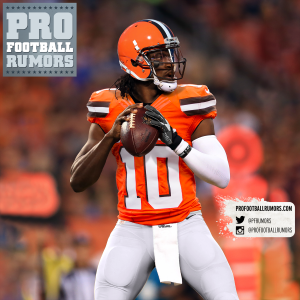 “I said this to all the players: Everybody’s slate is clean,” Jackson said, according to Albert Breer of The MMQB. “You always want to give guys the benefit of the doubt coming in, and I have not seen, heard or felt any negativity out of him. That’s the only Robert Griffin I know. He’s been an ideal teammate, a hard worker, he wants to please his coaches and he’s followed directions. That’s all I know.”

Griffin started out red hot with the Redskins before injuries and in-fighting led to his downfall. Eventually, the Redskins found their new franchise quarterback in Kirk Cousins while Griffin was on the outside looking in. Because of the stop-and-start nature of the last few years, Jackson & Co. know that they have a lot of work to do when it comes to the Baylor product.

“I’m not gonna say he’s raw, but he is still developing. And most young quarterbacks are still developing,” Jackson said. “I’d give coach (Mike) Shanahan and his son a lot of credit—he came into the league and they fashioned an offense for him that worked for him. And I’d give him credit too, coming out of the Baylor system, without the traditional footwork you play with, he produced right away. Those guys were able to mesh together a great season, but all that is in his past. It’s about mastering the quarterback position now. Mastery of how to play the position is the key to his success.”

The Patriots will have a big decision to make regarding the future of star cornerback Darrelle Revis this offseason, and Tom Curran and Mike Giardi of CSNNewEngland.com discuss in a video piece what that decision will entail. Although Revis has stated that he does not need to be the highest paid cornerback in the league to be happy, Curran and Giardi note that Revis is a shrewd businessman and that it will take a fair (read: highly-lucrative) offer to get a deal done.

Let’s take a look at a few more items from the league’s east divisions:

Robert Griffin III has struggled since returning from injury this season, and Washington’s head coach Jay Gruden has the power to bench the former first-round pick, writes Conor Orr of NFL.com. In the past, Griffin had been protected by ownership, but patience could be running thin within the organization.