Veteran defensive end Corey Wootton took to Twitter on Tuesday morning to announce his retirement from the NFL. 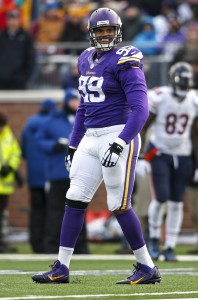 Wootton, 29, spent the first four seasons of his NFL career with the Bears before joining the Vikings for the 2014 season. In 2015, he signed on with the Lions in an effort to continue his tour of the NFC North. While he has never been an every-down player, Wootton saw 22 starts and totaled 10 sacks during his final two seasons with the Bears. In Minnesota, he came off the bench and recorded just a single sack in 2014. Last year, he was released by the Lions prior to the start of the season.

Wootton becomes just the latest NFL player to announce his retirement this week. On Monday, former Packers, Vikings, and Dolphins wide receiver Greg Jennings announced his retirement from the NFL and so did Vikings offensive lineman Phil Loadholt.

The 2015 season will likely be a redshirt year for rookie cornerback Ifo Ekpre-Olomu, Browns head coach Mike Pettine said on Wednesday, per Mary Kay Cabot of Cleveland.com. At one point, Ekpre-Olomu, who continues to recover from a serious knee injury, was viewed as a potential first-round pick, but Cleveland snagged him in the seventh round in May following his torn ACL and disclocated knee. The Browns will have to wait until the end of training camp to move the Oregon alum to injured reserve if they want to avoid the risk of losing him on waivers.

Here’s more from around the NFL’s two North divisions:

Former NFL signal-caller Jeff Garcia interviewed for the Rams‘ quarterbacks coach job earlier in the offseason, but the position ultimately went to Chris Weinke. Still, the club apparently liked what it saw from Garcia. According to Jim Thomas of the St. Louis Post-Dispatch (via Twitter), the Rams have added Garcia to their coaching staff as an offensive assistant for the coming season.

11:32am: The Lions have officially signed Wootton, the team announced in a press release.

10:57am: Wootton’s deal with the Lions is a minimum salary benefit contract, with an $80K signing bonus and a portion of the base salary guaranteed, tweets Birkett.

10:18am: The Lions are adding a little more depth to their revamped defensive line, according to agent Mike McCartney, who tweets that his client Corey Wootton is heading to Detroit on a one-year contract. Wootton had worked out for the club earlier this month.

Wootton, who turns 28 next month, spent the first four seasons of his NFL career in Chicago before joining the Vikings for the 2014 season. While he has never been an every-down player, Wootton saw 22 starts and totaled 10 sacks during his final two seasons with the Bears. Last year in Minnesota, he came off the bench and recorded just a single sack.

In Detroit, Wootton will be part of a new-look defensive line for the Lions, who lost Ndamukong Suh, Nick Fairley, and George Johnson in free agency. C.J. Mosley also remains unsigned. To replace the departed players, the team has brought in Haloti Ngata, Tyrunn Walker, rookie Gabe Wright, and now Wootton.

According to Dave Birkett of the Detroit Free Press (Twitter link), Wootton is expected to play primarily at defensive end for the Lions. The veteran lineman also tried out for the Jaguars and Titans earlier in the offseason and visited with the Saints in April before landing in Detroit.

By signing wide receiver Breshad Perriman on Monday, the Ravens set a new mark for the earliest that they have ever inked a first-round draft choice, Jamison Hensley of ESPN.com tweets. It’s no surprise that the Ravens got a deal done quickly with the UCF speedster and that’s partially because of how easy the current CBA has made signing rookies. Here’s a quick look at the AFC and NFC North..

Today is April 15, which means that, under the terms of the NFL’s original suspension, Adrian Peterson is now eligible to be reinstated. Still, nothing has happened on that front so far today, and few expect anything definitive or formal to actually happen in the next few hours either, tweets Ian Rapoport of NFL.com.

As Rapoport notes (via Twitter), the legal case related to Peterson’s suspension may still drag out for some time, but the league can reinstate him in the meantime, which will signal the end of his time served, making him eligible to start the 2015 season. Time will tell whether that happens with the Vikings or another team.

Let’s round up a few more items from across the NFC….

The Buccaneers hosted Lions restricted free agent defensive end George Johnson, according to Jenna Laine of Sports Talk Florida. Johnson, of course, was with the Bucs from 2010-2012. The Lions placed Johnson on a low-round RFA tender, which means the Lions have the right to match any offer Johnson receives, but they won’t collect compensation if he goes elsewhere. Here’s more out of the AFC and NFC South..

Each year, a group of players will get brought up with the same team over and over leading up to the draft. A combination of the player’s talent level, his fit with the team and the team’s draft slot make it convenient to send the same guy to the same team when making mock drafts.

The talent of Donald is obvious, as noted by Patrick Finley of the Chicago Sun-Times. Donald tore up the Senior Bowl, ran a 4.68 second 40-yard dash at the NFL combine, as well as impressing in the bench press and three-cone drill.

More obvious than his talent is the potential fit as a three-technique penetrator on the Bears defensive line. Donald led the nation in tackles for loss and sacks per game, and concerns about his relative small stature (6-1, 285 pounds) have lessened as of late.

As for the Bears draft slot, landing in the mid-first round seems reasonable for Donald. CBSSports.com lists Donald as the No. 13 overall prospect and the No. 1 defensive tackle. ESPN draft analyst Todd McShay campaigned for the Bears to draft Donald, saying the team’s Plan B would be in “panic” were he to be off the board. DraftInsider.net’s Tony Pauline figures Donald to come off the board anywhere between No. 6 and 16.

NFL Network analyst Daniel Jeremiah is sold on Donald’s pro potential: “I don’t think he really has anything to answer. The only concern you’d have is he’s not a 315-pound guy. But we always talk in scouting: You want a guy to make it through the whole process and check every box.

“He’s dominant on tape. . .. He lives in the backfield as a pass rusher. He’s explosive with his hands, and he’s also able to kind of bend and wrap, and a really dynamic interior pass rusher.”

And, as pointed out by Finley in the article, after losing Henry Melton and Corey Wootton in free agency, Donald would fill the void well and figure to be a key cog in the Bears defensive line for years to come.

SUNDAY, 4:45pm: Wootton will earn a $1MM base salary, with a $400K signing bonus and $100K workout bonus, according to Ben Goessling of ESPN.com (via Twitter). As previously reported, Wootton has $500K available in incentives.

FRIDAY, 10:05am: The Vikings have officially announced the signing of Wootton (Twitter link).

7:01pm: Defensive lineman Corey Wootton has agreed to a one-year deal with the Vikings, according to agent Mike McCartney (via Twitter). Wootton previously had surgery for a torn labrum in his hip but is said to have recovered well.

Wootton, 26, saw time on pretty much ever part of the defensive line last season for the Bears. In 16 games (15 starts), Wootton recorded 28 tackles and 3.5 sacks plus five passes defended. Known for his positive demeanor in the locker room, Wootton should bring as much in the locker room as he does on the gridiron. Wootton first emerged in 2012 with Chicago, racking up seven sacks and 20 tackles across 16 games (seven starts).