The Bears have made linebackers Sam Acho and Dan Skuta available for trade, according to Brad Biggs of the Chicago Tribune (Twitter link).

Chicago has a slight surplus at outside linebacker, as Leonard Floyd and Willie Young are the club’s projected starters while veteran Pernell McPhee recovers from a knee injury. Lamarr Houston is also around, and given his and McPhee’s lengthy injury history, it’s surprising the Bears don’t want to keep Acho and/or Skuta as insurance.

It’s not as if the Bears can hope to reap much in the way of draft compensation for either player — both Acho and Houston were freely available on the open market earlier this year, and both landed only minimum salary benefit contracts with Chicago. Both will be at least 29 years old by next, and neither has been a full-time starter in some time.

Given that the Bears are shopping Acho and Skuta, both figure to be in severe danger of being released by Saturday if Chicago can’t drum up a trade market.

The Bears have signed outside linebacker Dan Skuta, according to Adam Caplan of ESPN.com (on Twitter). It’s a one-year deal, according to a team announcement. 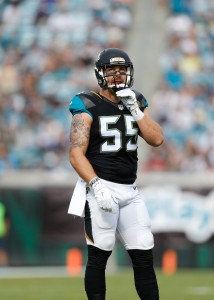 Skuta was released by the Jaguars roughly one month ago in a move that saved the team $4.1MM against the 2017 cap. In late April, he visited with the Patriots, but he left New England without a deal.

The 31-year-old came to Jacksonville in 2015 after notching five sacks as a reserve with the Niners. Unfortunately, he did not live up to the five-year, $20.5MM pact. Last year, he appeared in just 24.8% of the Jags’ snaps and made just two starts in his 13 games.

The Bears have a fairly deep OLB group with projected starters Willie Young and Leonard Floyd and reserves including Pernell McPhee, Sam Acho, and Lamarr Houston. However, Houston could be a cap casualty this summer since the team can release him for $5.01MM in savings versus just $1.98MM in dead money. As it stands, he’s projected to carry a hefty $6.99MM cap number in the fourth year of a five-year, $35MM deal.

Free agent linebacker Dan Skuta is visiting the Patriots today, reports Field Yates of ESPN (Twitter link). Skuta has been on the open market since the Jaguars released him April 11.

Skuta, who turned 31 last week, parlayed a five-sack 2014 season as a reserve with the 49ers into a five-year, $20.5MM deal with the Jags in 2015. That move clearly didn’t pan out for Jacksonville, though, particularly during a 2016 campaign that saw Skuta play just 24.8 percent of defensive snaps and total two starts in 13 appearances. Skuta made a minimal impact defensively, racking up a mere 18 tackles, though he did see time on nearly half of the Jaguars’ special teams snaps.

In New England, Skuta would likely function as depth behind fellow outside linebackers Shea McClellin and Rob Ninkovich. The Patriots also have 2016 sixth-round pick Elandon Roberts, who partook in 26 percent of their defensive snaps as a rookie, and Jonathan Freeny on hand.

The Jaguars have released linebacker Dan Skuta, according to a team announcement. The move will save the Jaguars $4.1MM against this year’s cap.

Skuta, 31 later this month, came to Jacksonville on a five-year, $20.5MM deal two years ago. That free agent investment did not pan out. Skuta was demoted to a bench role in 2016 and turned in his worst campaign in the last four years, according to Pro Football Focus. Skuta’s 68.3 overall score would have placed him as the No. 62 ranked edge defender in the league last year, if he had enough snaps to qualify. He saw only 268 defensive snaps across his 13 games.

The Jaguars have revamped their reserve linebacker group this offseason with the signings of Lerentee McCray, Josh McNary, and Audie Cole. With Skuta gone, the Jags still have six outside linebackers on the roster and nine linebackers in total. Myles Jack, Paul Posluszny, and Telvin Smith currently project as the starters.

Skuta’s deal called for him to earn $4.1MM in each of the next three seasons, but none of that money was guaranteed.

Dan Skuta faced a misdemeanor battery charge after a June 19 arrest, but the Jaguars linebacker saw his case dismissed once the prosecution declined to pursue charges, according to an ESPN.com report. The 30-year-old Skuta was accused of pushing a woman’s face into a glass window, an allegation he denied. However, Assistant State Attorney Natalie Lord categorized the case as one “not suitable for prosecution.”

Jaguars linebacker Dan Skuta was arrested on June 19 and charged with misdemeanor battery, but Skuta and his lawyer are now disputing the charges, as Brent Martineau of Action News Jax reports. While a woman claims she was hit by Skuta after she rebuffed his advances, Skuta’s lawyer contends that the linebacker was actually the one who was struck. Jags management, meanwhile, has released a statement saying that while they are “aware of the situation,” they won’t be offering further comment.

A pair of pending Colts free agents have hired Drew Rosenhaus to represent them, per Rand Getlin of NFL.com (Twitter links). Tight end Dwayne Allen and linebacker Jerrell Freeman will both be represented by the super agent heading into March and that could be a promising sign for the Colts. Rosenhaus has a history of getting deals done with Indianapolis and the team would surely like to retain both players.

WEDNESDAY, 10:35am: In what has been a busy morning for the team, Skuta’s signing is the latest to be confirmed by the Jaguars (via Twitter).

MONDAY, 10:51pm: Skuta’s deal is for $20.5MM over five years, according to Matt Maiocco of CSNBayArea.com.

9:31pm: The defection of 49ers defensive players will continue, as Adam Caplan of ESPN reports (via Twitter) that linebacker Dan Skuta will sign with the Jaguars when the free agent period begins tomorrow. We first heard of Jacksonville’s interest in Skuta earlier today, including that he’d have an expanded role on the Jags’ defense.

Skuta, 29 next month, also drew interest from the Dolphins and Eagles, the latter of whom would have a “ton of interest” in signing him had they not retained Brandon Graham, tweets Caplan. A key contributor on special teams, Skuta also saw more than 300 snaps at outside linebacker for San Francisco, racking up five sacks. He spent four seasons with the Bengals before joining the Niners in 2013.

The Vikings have expressed interest in pending free agent cornerback Bradley Fletcher, a source tells Chris Tomasson of the Pioneer Press. Fletcher had an off year for the Eagles in 2014, being ranked 92 out of 108 NFL cornerbacks by Pro Football Focus. He was much better in 2013, having been ranked 44 out of 110 players at the position. Here’s a look at the latest free agent rumors..