Former Titans linebacker Derrick Morgan is retiring from the NFL, as Turron Davenport of ESPN.com writes. In his post-football life, the 30-year-old says that he’ll shift his attention to helping those in need. 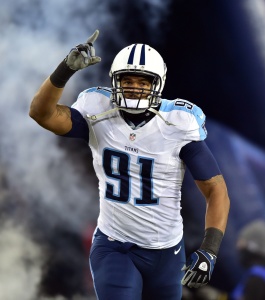 “My purpose in life is bigger than the game,” Morgan said. “What football taught me was the power of influence. My goal is to create better and more meaningful opportunities for marginalized communities to break the cycles of generational poverty and build greater wealth and economic mobility. I feel a deep responsibility to leverage my platform for this.”

Morgan entered the league as the No. 16 overall pick in the 2010 draft and spent his entire nine-year career with the Titans. He walks away from the game after compiling 44.5 sacks, 305 tackles, and earning upwards of $40MM. He’ll also get to heal up from a series of knee and shoulder injuries that held him back in his final season.

We here at PFR wish Morgan the best in retirement.

Although they’re on different timetables due to the junctures of their respective knee surgeries, both Derrick Morgan and Rishard Matthews underwent meniscus operations this month, Paul Kuharsky of PaulKuharsky.com reports.

While the Titans’ recently extended wide receiver may be ready to come off the PUP list by next week, Kuharsky notes Morgan will probably miss some regular-season time. He pegs the outside linebacker’s chances at being ready by Tennessee’s opener as less likely than him missing time.

Morgan suffered a knee injury in Tennessee’s second preseason game last week, per Kuharsky, who reports this is likely going to be a four- to five-week recovery process for the ninth-year defender. In the event Morgan misses time in September, Harold Landry figures to have a bigger role in his first NFL month. Morgan’s registered 44 sacks in eight seasons, collecting 7.5 in 2017.

Matthews underwent his surgery during the first week of August, but he’s back to running routes, Jim Wyatt of TitansOnline.com notes. Matthews has been shelved throughout the 2018 offseason, but Kuharsky notes the veteran was dealing with a different injury during the spring. The Titans did not disclose Matthews’ ailments throughout the offseason.

Matthews has posted more than 1,700 receiving yards in his two Titans seasons, scoring 13 touchdowns in that time. Second-year receivers Corey Davis and Taywan Taylor have worked as the Titans’ starters during Matthews’ lengthy absence. Both Matthews and Morgan played in 14 regular-season games last season.

Now that Andrew Luck‘s record-setting contract has been wrapped up, beat writers and national reporters alike are already speculating as to when the next big-money quarterback deal will be consummated. Members of the 2014 draft class are eligible to sign extensions after the 2016 season is over, and Hays Carlyon of The Florida Times-Union writes that the Jaguars will extend quarterback Blake Bortles, the third overall selection of the 2014 draft, as soon as the collective bargaining agreement allows them to do so.

Of course, as a first-round selection, Jacksonville could keep Bortles under club control through 2018 by exercising his fifth-year option, but Carlyon believes the Jags will move to sign Bortles to a long-term deal early so that they can front-load his contract and take advantage of the considerable salary cap space they currently have, thereby giving them more flexibility down the road.

Now for more notes from the league’s south divisions:

MONDAY, 3:42pm: Titans defensive end Derrick Morgan will have shoulder surgery and miss the remainder of the year, according to Terry McCormick of TitanInsider.com (on Twitter). Ditto for Dexter McCluster, who will undergo season-ending surgery on his wrist (link).

Back in March, the Titans re-signed Morgan to a four-year, $27MM deal with $10.5MM of that fully guaranteed. Morgan’s return to Tennessee was a little surprising, since he was widely considered a better fit as a 4-3 defensive end, and has never really lived up to his first-round billing in five seasons with the Titans. However, despite modest sack totals (his 6.5 in 2014 matched a career high), Morgan graded as a top-10 outside linebacker according to PFF, which ranked him eighth in 2014 and credited him with 49 total quarterback pressures. Morgan paid visits to the Falcons and Buccaneers in the spring and was reportedly scheduled to hit Dallas for a meeting with the Cowboys. Instead, he circled back to Tennessee.

In 10 games (9 starts) in 2015, Morgan has amassed 24 tackles and 4.5 sacks with two pass deflections and one forced fumble. The versatile McCluster, meanwhile, has tallied 507 catching and receiving yards for the Titans in 2015.

Here are some details on several of the new contracts agreed to or signed by free agents within the last few days:

1:39pm: The Titans have now officially announced their deals with Orakpo, Morgan, and the three other players they agreed to sign today (Twitter link).

7:05am: After staying relatively silent throughout the first few days of 2015’s free agent period, the Titans have made their big splash on Friday morning, fortifying their defense with a pair of pass rushers, per multiple reports. According to Adam Schefter of ESPN.com (via Twitter), the team has agreed to terms with former Washington linebacker Brian Orakpo. Meanwhile, Jim Wyatt of the Tennessean reports (via Twitter) that the club has also reached a deal to re-sign its own marquee free agent, Derrick Morgan.

Both players will be signing lucrative four-year contracts with Tennessee. Mike Garafolo of Fox Sports has the terms on both deals, tweeting that Orakpo’s four-year pact will have a $32MM base value, with $13.5MM guaranteed, and can be worth up to $35MM overall. Morgan’s deal is worth just a little less, with a max value of $30MM, a base value of $27MM, and $10.5MM in guarantees, tweets Garafolo.

The pair of signings are extra intriguing for a Titans defense that will be bringing aboard former Steelers defensive coordinator Dick LeBeau for the coming season. Having made the switch to a 3-4 scheme a year ago, the Titans went through some growing pains en route to a 2-14 record, but LeBeau is expected to help smooth things out in 2015, and having a pair of talented pass rushers like Orakpo and Morgan on the outside should only help that transition.

Orakpo, 28, is coming off a disappointing 2014 season that ended after just seven games when he tore his pectoral muscle and was placed on injured reserve. Still, despite the fact that he logged just 0.5 sacks last year, the former first-round pick was viewed as one of the top free agent players a year ago, when he was coming off a 10.5-sack season and earned a franchise tag from Washington.

Orakpo, who had a multi-day visit to Tennessee this week and was expected to eventually visit the Cardinals if he didn’t work something out with the Titans, was ranked as the NFL’s fourth-best 3-4 outside linebacker in 2013 by Pro Football Focus’ grades (subscription required). Per PFF, Orakpo racked up an impressive 51 total quarterback pressures in ’13.

As for Morgan, his return to Tennessee is a little surprising, since he is considered a better fit as a 4-3 defensive end, and has never really lived up to his first-round billing in five seasons with the Titans. However, despite modest sack totals (his 6.5 in 2014 matched a career high), Morgan graded as a top-10 outside linebacker according to PFF, which ranked him eighth in 2014 and credited him with 49 total quarterback pressures.

Morgan paid visits to the Falcons and Buccaneers this week, and was reportedly scheduled to hit Dallas for a meeting with the Cowboys next. Instead, he’ll be returning to Tennessee, where LeBeau will be tasked with getting the most out of the former 16th overall pick, who will be entering his age-26 season.

When I ranked PFR’s top 50 free agents last weekend, both Orakpo and Morgan squeezed into the top 20, at 19th and 20th respectively. Outside of Greg Hardy, who has his share of off-field question marks, the two players looked like the clear-cut top pass rushers still available as we neared the end of the first week of free agency. The Titans did well to get them both, and if the club were to add to its front seven next month by drafting a player like USC’s Leonard Williams to complement Jurrell Casey, the defense in Tennessee could look significantly more dangerous heading into the 2015 season.

As anticipated, Derrick Morgan left his meeting in Tampa Bay today without signing with the Buccaneers, tweets Vaughn McClure of ESPN.com. The Cowboys are expected to be next on Morgan’s list of visits, and the Titans still want to re-sign him as well. As for the Bucs, if they decide to move on from Morgan, it’s not clear who they’d target instead. Greg Auman of the Tampa Bay Times tweets that the club has yet to reach out to George Selvie, who played his college ball at the University of South Florida.

Derrick Morgan won’t be signing with the Buccaneers, according to Vaughn McClure of ESPN.com (on Twitter). The Falcons are out on Morgan too after signing Adrian Clayborn, Terry McCormick of TitanInsider.com tweets. More free agent news from around the league..